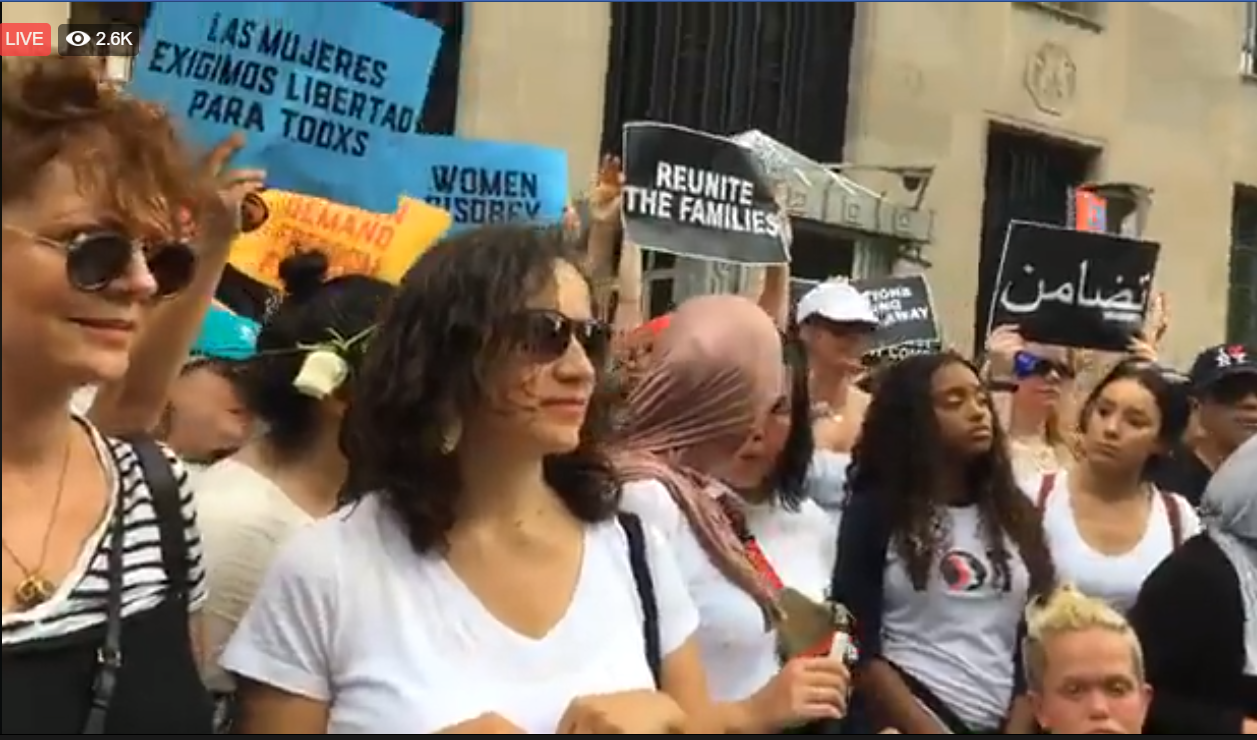 Anti-Trump, Pro-Palestinian and Pro-Sharia activist Linda Sarsour and her band of acolytes are at it again.  Today, in Washington DC, they are engaging in a #WomenDisobey march “to end family detention.” Judging by the information provided by the groups involved along with a “bail fund” being promoted by the National Women’s March, they also plan on engaging in “civil disobedience.” What exactly that will be is anyone’s guess.

We are calling for all women to join us for a mass civil disobedience in DC on Thursday, 6/28, to demand this administration stop criminalizing undocumented immigrants and tearing children away from their parents.#WomenDisobey to #EndFamilyDetention https://t.co/7IxTkxYr6N pic.twitter.com/TQ9nKKxntf

In an article written for The Guardian, activist Winnie Wong wrote:

This action begs the question: Where were these women during the Obama years when this was going on?  I don’t know about you, but I don’t recall any mass protests over the thousands of children arriving at the border unaccompanied and then detained in literal cages by the Obama administration.  As The Daily Caller reported, “Obama detained thousands of migrant children in cages, and lawsuits accuse his administration of inhuman conditions in detainment facilities.”

The women claim to be concerned about separation and detainment of families, but just yesterday were having a meltdown over the retirement of Justice Kennedy from the Supreme Court – fearing that Roe v. Wade would be overturned.

Here’s what happens if 45 gets to nominate his pick for SCOTUS. Mobilize and contact your Republican senators-especially Collins and Murkowski, #vote #bluewave2018 #RoevWade #KennedyRetirement #UniteBlue #BlueWaveComing2018 pic.twitter.com/wjMN5VNRyB

OANN pundit Liz Wheeler summed up the hypocrisy with a well-worded tweet.

All last week Democrats were crying with outrage over inhumane treatment of migrant children.

Today they’re crying with outrage at the idea they might not be able to kill unborn children.

And here I thought Democrats cared about the children! Oh wait… no, they don’t.

So what is today’s protest really about?  Is it about the detention of people entering the US illegally, or is there a bigger goal for the group?  As columnist John Gilmore says, “the Left tells us clearly their goals,” which once again they have: “…we will put our bodies on the line until Congress sets in motion a plan to abolish the Immigration and Customs Enforcement (Ice) agency.”

Just yesterday a bill was introduced in Congress by Wisconsin Democrat Rep. Mark Pocan. Pocan said in a statement:

“ICE is tearing apart families and ripping at the moral fabric of our nation. Unfortunately, President Trump and his team of white nationalists, including Stephen Miller, have so misused ICE that the agency can no longer accomplish its goals effectively.”

“The heartless actions of this abused agency do not represent the values of our nation and the U.S. must develop a more humane immigration system, one that treats every person with dignity and respect.”

The “White Nationalists” accusation is taken even further by Wong when she compares the detention of people attempting to come to the US illegally to the Japanese Internment camps during WWII.

The images we have seen and the cries we have heard evoke some of the most shameful moments in our nation’s history, including the Chinese Exclusion Act of 1882, which barred Chinese people from entering the US to work, and the second world war-era Japanese internment camps, in which more than 100,000 people of Japanese ancestry were forcibly relocated and imprisoned for the duration of the war.

(I wonder if she realizes that it was Franklin Delano Roosevelt – the celebrated hero of the Left – who ordered the Japanese internment camps?)

In Congress, Pocan was joined by Rep. Raul M. Grijalva, D-Ariz., and Rep. Mike Capuano, D-Mass., in authoring the legislation.  The three congressmen join other other congressional Democrats, including Reps. Pramila Jayapal of Washington, Earl Blumenauer of Oregon and Jim McGovern of Massachusetts. (ABCNews)

Many 2018 midterm candidates are also on the #AbolishIce bandwagon.  On Tuesday, Alexandria Ocasio-Cortez defeated ten-term Democrat Representative Joseph Crowley in the NY primary. Ocasio-Cortez is a 28 year old Democratic Socialist who built her platform on the planks of immigration reform and the abolition of ICE.

There are nearly 20 democrat candidates joining the rallying cry to abolish ICE, including:

“Together we can pass universal, single-payer healthcare, abolish ICE and private prisons, ensure debt-free college, and move ourselves towards 100% clean energy.” #TeamIlhan pic.twitter.com/xowjRctfTX

Omar calling for abolishing ICE shouldn’t come as a surprise, considering her alliance with Sarsour.

It remains to be seen if any of the #WomenDisobey march attendees will engage in arrest-worthy civil disobedience.  Below are links to the live stream videos of the march and the speeches preceding the march.

Please stay tuned for updates on this story.

9 thoughts on “Another Women’s March: #WomenDisobey”