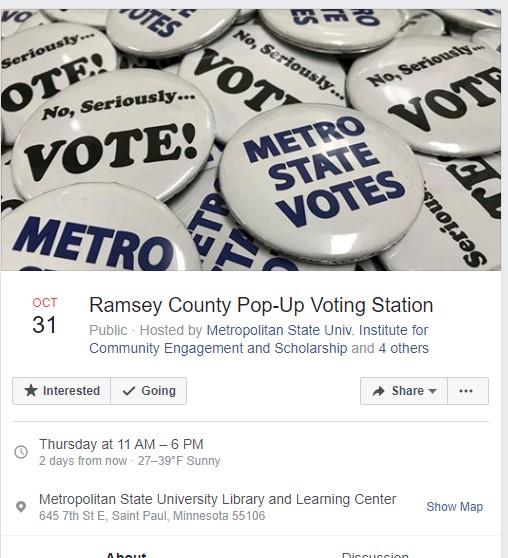 Pop-up voting centers in Ramsey County are a good indicator as to how the Left intends to defeat President Donald Trump in Minnesota. These centers are only open for a few hours for one day during the early voting period. Counties keep the location of pop-up centers on the “DL” (“down-low”) until the last minute, making it impossible to coordinate poll watchers to ensure integrity at pop-up polling locations. Minnesota Secretary of State received a $6.6 million grant from the Help America Vote Act (HAVA) in 2019. The money guarantees the funding of more pop-up election centers in 2020.

There are at least two pop-up voting center locations in Ramsey County for the 2019 election. Sources who have queried Ramsey County election officials by phone indicated there would be three pop-up centers beginning on October 30, 2019; Higher Ground Academy, St. Catherine’s, University and Metropolitan State University.  There is no information available on the Higher Ground Academy website or on the Ramsey County elections website to indicate it will be a pop-up location. See how confusing this is?  Metropolitan State and St. Catherine’s have information available on their websites.

IT’S ALL ABOUT THE GARBAGE!

The main issue in Ramsey County in the 2019 election is organized garbage collection and the election of St. Paul City Council members. According to ISAIAH, a nonprofit that specializes in trashing and harassing conservatives, coordinated trash collection is about “Racial Equity.” On the ISAIAH website, the organization paints the anti-organized garbage group as a bunch of racists – it’s the rich vs. the poor, the white elite vs. everyone else. ISAIAH says that collective action with state and local governments, “works to close racial disparities with our white, black, and brown neighbors.” ISAIAH goes on to accuse for-profit trash haulers of charging higher prices in black neighborhoods, calling it a “black tax.” 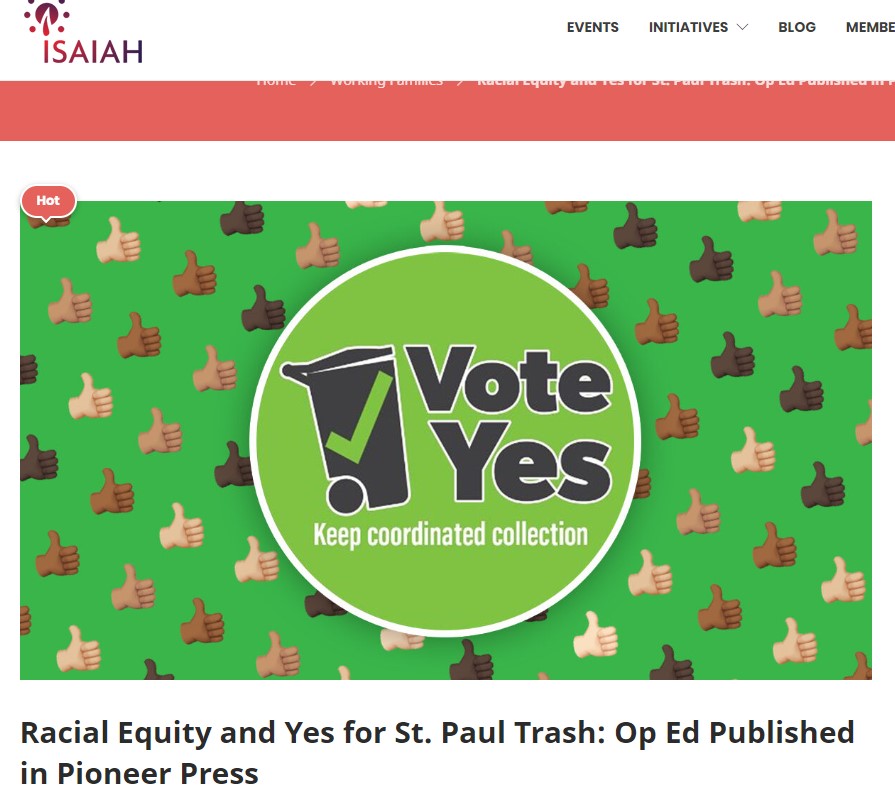 The real issue here is that the city of St. Paul signed a contract for collective trash removal with St. Paul Haulers, LLC on November 14, 2017. Opponents of the city’s organized system gathered signatures to put the issue before voters. Though the St. Paul City Council opposed that move, a Minnesota Supreme Court ruling found the voters had a right to vote on the issue and that it be on the Nov. 5 ballot. According to an article by MPR News, “the City Council approved a 22 percent limit on the 2020 property tax levy — a proposed hike aimed at covering the city should its garbage collection system gets canned.” The City Council had to raise property taxes in order to pay for the,”$30 million hole that would be left if voters decided not to accept the city’s new contract with specific haulers.”

Trash is a messy business in St. Paul. Get out and vote to can the City Council.

Voting this year might be a snap if a pop-up early voting center is located at your local grocery store, street corner, or tent.