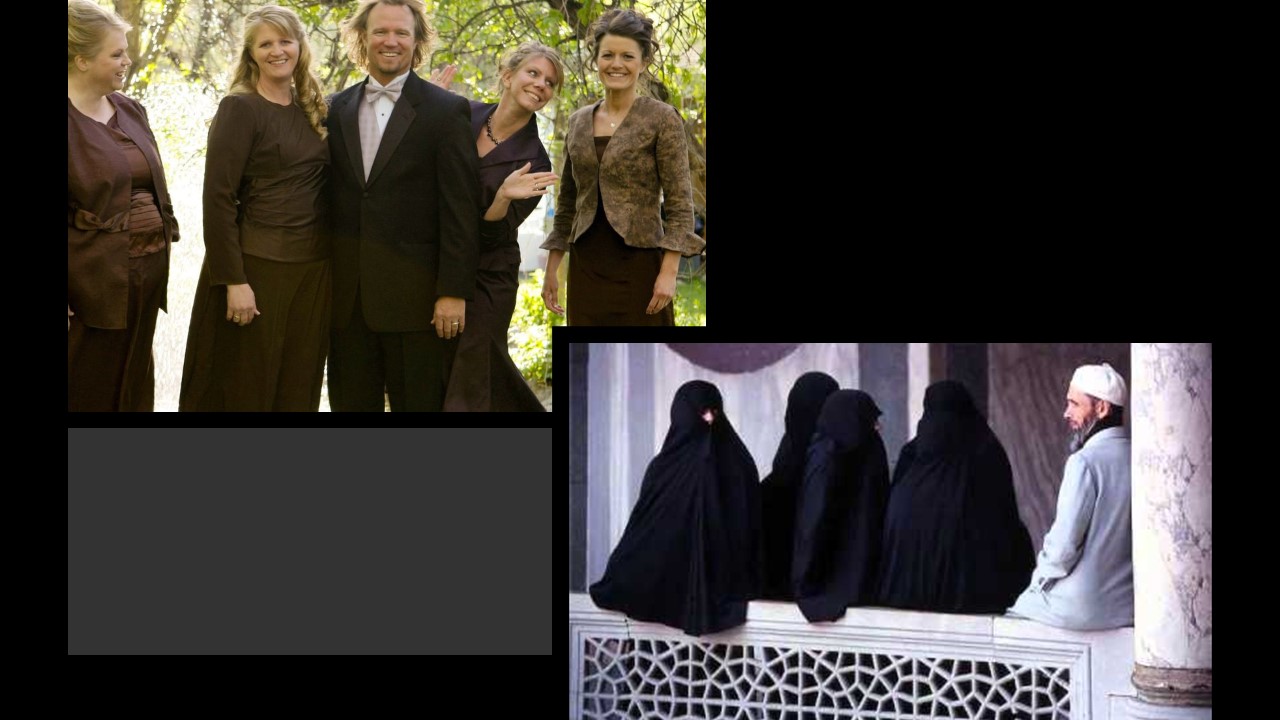 Are we allowing polygamy in America?

Polygamy, the practice or custom of having more than one spouse at the same time, is illegal in the United States of America.

We are being desensitized to this unusual practice with television shows like “Sister Wives” and we hear the stories about people from other cultures entering the country with more than one spouse.

In the headlines earlier this year was the story of a polygamist sect leader whose company purchased 40 acres of land near Grand Marais, Minnesota. The sect called Fundamentalist Church of Jesus Christ of Latter-Day Saints, or FLDS, is a radical offshoot of the Mormon faith whose members believe in polygamy. Mormons abandoned the practice of polygamy in 1890 and still prohibits to this day.

Even one of our sitting congresswomen, Ilhan Omar, (D-MN) was apparently married to two men at once. She claimed her marriage in 2002 to Ahmed Hirsi (then called Ahmed Aden) was a “cultural marriage.” There was no marriage certificate or divorce papers filed for her “cultural marriage” since it was not a legally recognized marriage in the state of Minnesota. Omar said she was married to her first husband in the “faith tradition”. She then married a man in 2009 named Ahmed Nur Said Elmi (who is allegedly her brother) in a legal civil ceremony in Eden Prairie, Minnesota – or as legal as it can be considering that the groom is suspected to be her brother. That joyful union, she claims, lasted until 2011, when she said she reunited with Hirsi, whom she called her husband, but she didn’t file for a legal divorce from Elmi until 2017.

The Federalist Society wrote about the dissolution of Islamic marriages saying, “When American judges attempt to apply contract terms to Islamic marriages, they often find that there rarely is complete conformity with American civil expectations for a recorded marriage license and officiants are often not registered; sometimes they are not even imams. Also, Islamic marital negotiations are regularly conducted by a male representative and without the bride’s participation. Sometimes the bride is underage. In many cases these practices violate American expectations for basic fair bargaining interests in contract creation.”

Why are we recognizing marriages that do not conform with American law?

A friend of mine, who asked to remain anonymous, is an activist. She said a few years ago she met with the director and staff of a VOLAG affiliate, or “Voluntary Agency” in Minnesota. (A VOLAG has cooperative agreements with the U.S. State Department to receive and place newly arrived refugees in the United States.) Her story about her meeting with the VOLAG director is stunning.

She said the director admitted to her that this particular VOLAG affiliate instructs refugees on how to bring their multiple wives into the United States, despite the fact that polygamy is illegal. The director told her that all the refugee agencies do this and the “law looks the other way.”

The director also told her the agencies instruct the male refugee to list one woman as a wife and to list the other women as “friends”.  She was told that each “friend” along with her children get their own apartment. The man just moves from apartment to apartment to be with each of his families and he can have up to four wives. The three girlfriends, along with their children, collect welfare because they are considered “unwed mothers”.

The American Immigration Council claims applications for refugee resettlement can be denied on several grounds including health, criminal and security. It also states refugees may also be denied for polygamy, misrepresentation of facts on visa applications, smuggling, and previous deportations but waivers can be granted in some cases.

Waivers can be granted in some cases? Wait! What?

In an effort to further research the issue, we called Arrive Ministries, a VOLAG here in Minnesota, and spoke with Bob Oehrig, the Executive Director. we asked him how organizations like Arrive Ministries handle cultural matters when resettling refugees, like multiple spouses.

Oehrig said, “Refugees don’t have multiple wives that are being resettled in the Twin Cities.”

Oehrig told The Deplorable Housewives of the Midwest that every refugee who comes to the United States is resettled through a program with the U.S. State Department. He went on to say that the refugees go through background checks with Homeland Security and DNA testing. If the refugee is coming to be reunited with family members, the DNA tests verify that the children or parents are really related to who they say they are. The U.S. does not allow polygamous relationships, Oehrig emphasized.

Despite Arrive Ministries assurances that refugees who practice multiple-spouse marriages are not allowed into the U.S., apparently they are occurring. The Federalist Society wrote, “Polygamous Muslim marriages in the U.S. are increasing, with current estimates showing that 50-100,000 Muslims in the U.S. now live in a polygamous family.“

An article in the Philadelphia Inquirer from 2017 stated, “there has been a rise in the practice of polygyny, marriages in which the husband has more than one wife, particularly in cities like Philadelphia, New York and Chicago.” There is a difference between “polygyny” and “polygamy“. When a person has more than one spouse, the word is polygamy. If the spouses are wives, polygyny is a more specific term. If the spouses are husbands, the appropriate word is polyandry. Both polygyny and polyandry are forms of polygamy.

The U.S. State Department website states, “In order for ineligibility to result, the alien must intend to actually practice polygamy in the United States. The alien’s mere advocacy of or belief in the practice, or the fact that the alien at one time in the past may actually have practiced polygamy would not be sufficient to render a finding of inadmissibility (emphasis added). To sustain an inadmissibility, an officer would have to find the applicant will maintain a married relationship with more than one spouse while in the United States.”

And how would the officer find out if the refugee is practicing polygamy after they are admitted into the United States?

Refugees come to the United States for a better life, however, it appears some are not leaving behind their cultural customs and the agencies that are placing them are not consistent in enforcing the laws of the United States of America.

So what does that mean for taxpayers?

The Federation for American Immigration Reform (FAIR) puts the price-tag at $8.8 billion in federal and state costs over a 5 year period — or nearly $80,000 per refugee. There are about 18 federal and state programs refugees can turn to for financial help, including food stamps, child care, public housing and school loans. The Center for Immigration Studies reports the United States resettled more refugees than any other nation in 2017 and 2018.

If polygamy is against the law in the United States, then why are we seeing an increase in the practice of it? Furthermore, “cultural marriages” are not marriages in the eyes of the law. In America, a marriage is not valid unless you have a license. As John Adams once said, we are a nation of laws, not of man. No one is or can be allowed to be above the law. We need to start enforcing the laws of our land and punish those who break our laws, not reward them. Cultural customs are not an excuse to break the law. Once refugees come to the United States of America, they need to adhere to our laws or face serious consequences or deportation.