Four billboards warning against a “DFL Sanctuary State” have drawn the ire of Catholic Charities Twin Cities and Minnesota Democrats.

As America barrels toward the Midterm Elections on November 6, one of the issues cited most by voters is immigration, particularly illegal immigration.  This issue has been highlighted over the last couple of weeks by the caravan of thousands of migrants moving from Guatemala and Honduras through Mexico to the United States where they will be greeted by US Border Patrol agents and the US military.

In Minnesota, the differences between the gubernatorial and Attorney General candidates on immigration and sanctuary cities/states are stark: the GOP candidates, Jeff Johnson (Governor) and Doug Wardlow (Attorney General) both believe that local law enforcement should work with ICE to enforce immigration laws.  Both candidates have received endorsement by local police federations.

Conversely, neither of the Democrat candidates, Tim Walz (Governor) and Keith Ellison (Attorney General) believe local law enforcement should work with ICE to enforce immigration laws.  In 2017, Ellison said it is Minnesotans’ responsibility to give illegal immigrants sanctuary.

Sheri Auclair was inspired to place billboards around the Twin Cities warning against the DFL push to turn Minnesota into a sanctuary state, so she founded the “Concerned Mothers of Minnesota” PAC. 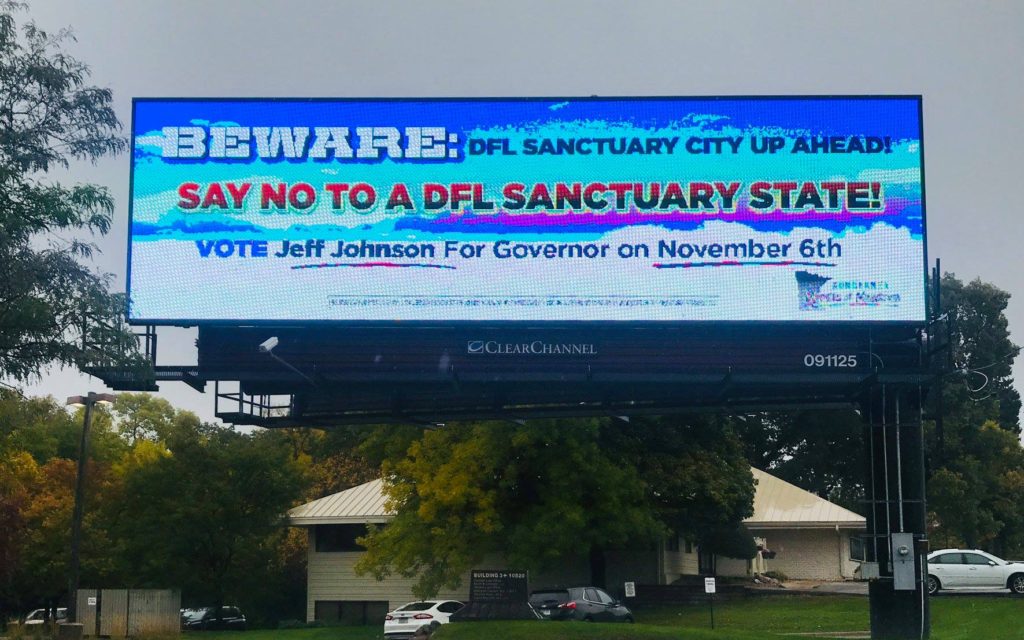 In an interview with Deplorable Housewives of the Midwest, Auclair said the billboards came to her during a congressional district meeting: “I saw the billboard in my mind, the wording, everything and just felt COMPELLED to do it.”  The inspiration came to Auclair at the end of September; the first billboard went up October 8, 2018.

Not everyone is pleased with Auclair’s inspired message.  Earlier this week she received a call from her Clear Channel sales representative. The sales rep explained that Catholic Charities owned the lease on one billboard, located at Interstate 94 and Chicago in Minneapolis, and they weren’t happy with the billboard’s message, claiming it “goes against their core beliefs and values.”

Auclair was shocked, “Catholic Charities just took a down a billboard for the pro-life (gubernatorial) candidate!” But she didn’t let it stop her – her sales representative found her a new and better location for the billboard off Interstate 35 and Lake Street in Minneapolis.

Auclair thought the controversy would end there.  It didn’t.

Over the weekend, Auclair attended a Halloween fundraiser costume party for Hennepin County Sheriff Rich Stanek.  While at the party she and some friends posted a short Facebook livestream video of the fun they were having at the party.  A short time later, Auclair noticed an uptick in views on the video and realized that it was being shared by many anti-Trump people.  Further research showed that not only had the video been shared on Facebook (with negative commentary), but that someone had uploaded the video to YouTube.  It was picked up by Patrick Coolican (Hotdish politics) and by the far-left BluestemPrairie.com blog.  Using the title, “Jungian collective unconscious of MNGOP shared cray Stanek Halloween fundraiser video,” the Bluestem Prairie writer blasted Auclair for being a Trump supporter and having the nerve to dress up and have fun at a Halloween party as well as for her billboard – OH MY!  Using language like “Jungian collective unconscious” and ” sharing deep thoughts about cultural appropriation among European historical figures,” Bluestem Prairie attempts to sound intellectually derisive of Auclair and the GOP attendees of the party.  (I am wondering if Bluestem Prairie could actually articulate the definition of “Jungian Collective Unconscious” in the context of political association or if the writer just liked the way the words sound?)

The intimidation tactic worked for a short time.  On Wednesday, October 31, 2018, Auclair posted on Facebook that her account would be made private – only accessible by friends instead of wide open.  During our interview, Auclair said that she has always kept her profile public with her life and politics intersecting and in full view of the public.  She said, “I want people to see me as human” not just in a political context.  And with over a thousand friends, Auclair knows that her reach via those friends is larger than if she separated her accounts into private and public.  However, having her name, photos and video spread by anti-Trump/GOP leftists shook her enough to go to her local police and ask for increased police presence in her neighborhood.

On Wednesday, October 31, 2018, Auclair’s Facebook profile was private, “Friends Only” for about 12 hours. Then Auclair changed her mind and reset it to public: “They are not going to scare me into stopping doing what I do,” Auclair told DHOM, “I am not backing down.”