Being a mama is the hardest, best, and worst job I have ever had. I appreciate that one day a year is set aside for mamas, though maybe it should be changed to once a month or even once a quarter – I mean, seriously, only one day a year for mom appreciation?

Last weekend my oldest child graduated from college. As I listened to the keynote speaker tell the graduates to “choose love” while he bashed the NRA and those he deemed less tolerant than himself, then proceeded to tell the kids that they might die after graduation (true story; I have the video), I reflected upon life as a mama.

I have four kids, so last weekend was the first of the college graduations.  Our kids come in pairs, two in their 20s and two in middle school, with a seven year gap between our second and third child, which has made me both the oldest and youngest mom in classrooms in the same year – a very odd experience to say the least. 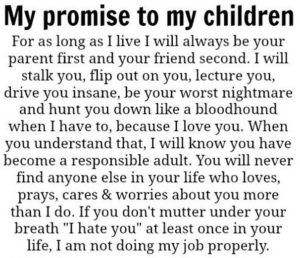 Over the past couple of years, our family has been through some major changes: we sold our house and left Minnesota, landed on the Kansas plains for a school year (while living in a “tiny house on wheels” aka a travel trailer), and finally ended up in Indiana where we are attempting to put down roots.  When you change your life so drastically, and live for a time not knowing exactly where “home” will be, you search for those constants in your life that help to maintain your identity. For me, it was my kids and husband: no matter where I am, or what I am doing, the main thing I know myself to be is a mama to my children and wife to my husband.

Let the feminists scoff all they want. I don’t mind. I’ve dealt with worse: toddlers and teenagers. (At The Same Time. Bring it, Feminists. I can handle anything.)

I realize that today’s feminists will scoff if they happen upon this piece and read the words above because they will see those words as weakness or my not living up to my full potential or they’ll think that I have no identity outside of being a mama or a wife. Or, they believe that having an identity as a mama and wife is somehow “less-than” whatever identity they choose to have that day.  (Which, really?  If people can choose to “feel” that they’re 5 years old when they’re 37 or choose to be non-conforming with whatever on any given day, why is it bad for us mamas and wives, dads and husbands to choose to be identified as such and to embrace those beautiful parts of our identities?) But that’s ok.  Let the feminists scoff all they want. I don’t mind. I’ve dealt with worse: toddlers and teenagers. (At The Same Time. Bring it, Feminists. I can handle anything.)

Being a mama is the hardest, best, and worst job I have ever had. I appreciate that one day a year is set aside for mamas, though maybe it should be changed to once a month or even once a quarter – I mean, seriously, only one day a year for mom appreciation? New mamas should get at least one day a week of appreciation – you know, so they can actually get a shower by themselves and maybe a nice long nap or a trip to Target and DSW just to browse in peace. (FYI, “new mom” extends to moms with kids aged newborn through, oh I don’t know, 21, 22…47 and up, maybe?)

Some days, being a mama is tough, but being a kid of mine can be hard as well: embarrassing my kids is one of my not-so secret joys. It’s gotten to the point where they either walk really far away from me or they join in on the fun.  Most of the time, they join in because it’s just easier than fighting it (if they show signs of embarrassment the craziness gets ramped up).  When they complain, I just tell them, “Having a weird mom builds character.” 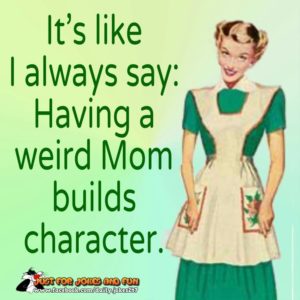 There’s something about being a Deplorable Housewife that makes us expect just a little more from our kids.  We’re not asking for perfection, but we do have a pretty high set of expectations for our kids.  With those expectations come the opportunities to excel and succeed and to also fail.  Those expectations are wrapped in unconditional love, something that every child of mine has tested or questioned at different points in their lives, and have discovered that no matter what, mama loves them. 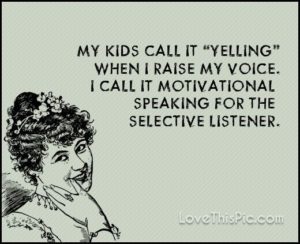 However, we’ve had our times of hissy fits and tantrums, too, where I’ve been told “I hate you, you aren’t my fwiend!” (that was over Chapstick. Yes. Chapstick.) and one of my favorites, “You’re RUINING my LIFE!” (That one was when I borrowed the child’s phone to let her boyfriend know that if he borrowed her ((my)) car again and I found out about it, I would report it stolen.) 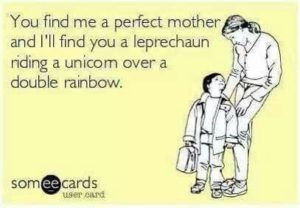 Cheers to all the mamas out there, driving their kids nuts, embarrassing them, loving them, and doing everything to make sure they get out of the nest safely and successfully:  You are all Rock Stars!