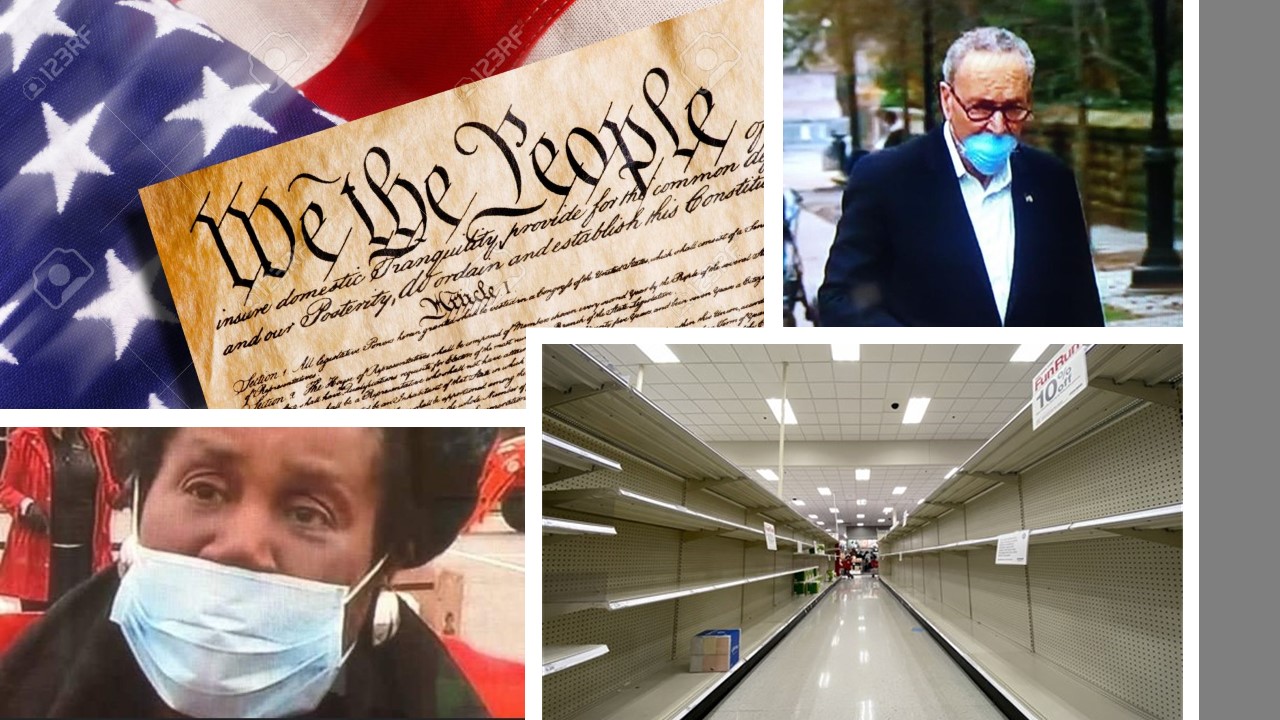 Once upon a time, we used to live in a Constitutional Republic called The United States of America.

Things were going fairly well in this Constitutional Republic until mid-March 2020 when a booming economy, rising stock market and record setting employment reports came to a grinding halt. All thanks to a virus named Corona.

Practically overnight, the economy fell like a house of cards.  Restaurants are shuttered. Stores won’t open. Businesses are forced to close their doors. Don’t even think of going to a hair salon! Houses of worship are shut down during the holiest of Holy Weeks. People are losing their jobs (16.8 million as of today). Everyone is ordered to “stay at home”. At least, we have no excuse for having a dirty house now!

Democrat Governors seemed to relish in this pandemic, proclaiming edicts that are clearly unconstitutional in a ham-handed way in order to “flattening the curve” of the virus.

Panic is setting in. Stores shelves are completely emptied of toilet paper and anti-bacterial wipes. People are forced to stand in long lines just to get into grocery stores to get basic necessities for their families. Eggs, chicken and ground beef, which were always so plentiful, are now scarce. The USA is starting to resemble Venezuela.

We are now living a strange new world where fathers who innocently take their children to a playground get arrested for disobeying the “social distancing” rule while being outside with the very people who live under their same roof! The United States Constitution prohibits Congress from enacting legislation that would prohibit a citizen’s right to assemble peaceably while the Fourteenth Amendment to the United States Constitution makes this prohibition applicable to state governments. I don’t believe there is a caveat in these amendments for Coronavirus. Meanwhile, ironically, Democrats pushed for the release of felons from prisons to mitigate the chance of prisoners spreading the Coronavirus. Get it? Fathers who play with their kids get arrested while people who actually broke the law and committed crimes get released from prison.

In addition to having rules about how many people can gather and how far apart you must stand from one another, Governor Tim Walz of Minnesota instituted a snitch line where people can call in and tattle on their neighbors if they feel the “social distancing” rule is not being followed to their liking! The “Stay at Home” hotline number is 651-793-3746 in case you feel the urge to rat out your friends.

Using Coronavirus as an excuse, Democrats are now licking their chops at the possibility of having mail-in ballots for Election Day. (Makes you wonder how long the powers-that-be planned to extend this stay at home order before people start rioting in the streets?)  Of course, anyone with half a brain and a modicum of common sense knows that mail-in ballots is code for “We know we can’t beat President Trump in November, so the only way we can prevail is to have mail-in ballots which will make cheating so much easier this time around!”

I find it very curious that every year, people have ABSOLUTELY NO PROBLEM celebrating New Year’s Day on January 1, Christmas Day on December 25, Independence Day on July 4, and Thanksgiving on the 4th Thursday in November – but apparently everyone on the left has a huge problem taking time off for Election Day. Early and absentee voting has helped to make voter fraud a lot easier to accomplish.

Being that we are not a Banana Republic yet, Election Day in the United States of America is the annual day set by law for the general elections of federal public officials. It is statutorily set as “the Tuesday next after the first Monday in the month of November”. There are several reasons why in 1845 Congress established a fixed date for Election Day. Designating a specific day to vote gave citizens of America a sense of national unity. It was also easier to manage elections if voting was done on the same day. A specific day designated for voting also prevented the possibility of election fraud. It also eliminated the instance of a citizen regretting their vote if a candidate had to drop out of a race or if bad news or questionable information about a candidate came out after the citizen had voted early.

.@RealDonaldTrump is right. The Left wants out of control vote by mail and hates voter id because they want to be able to steal elections when necessary. We MUST Protect Our Votes! https://t.co/Q4QQBd9hQJ

Wisconsin’s Democrat governor tried to use the Coronavirus as an excuse to stop this week’s primary and was thankfully overruled by the state’s Supreme Court.

In the spirit of overstepping their bounds, governors of both Michigan and Nevada, who are both democrats, issued executive orders to restrict the use of hydroxychloroquine to treat Coronavirus patients in their states, claiming there is “no consensus among experts that the drugs can help people suffering with the coronavirus”  – despite promising results in patients in both the United States and Europe. Few news outlets are reporting that Dr. Ihsan Azzam, the Nevada chief medical officer who advised Governor Steve Sisolak of Nevada to prohibit the use of hydroxychloroquine for Coronavirus treatment is not even licensed to practice medicine in the United States.  Michigan Governor Gretchen Whitmer went so far as to threaten the licenses of doctors and pharmacists who prescribe the drug to treat Coronavirus. Unbelievable.

Other news that is not being widely reported is Governor Sisolak was found to be hoarding the potentially life-saving hydroxychloroquine for the Nevada Department of Corrections to stockpile the drug for prisoners just in case there was a Coronavirus outbreak in prisons!

Democratic Michigan State Representative Karen Whitsett went against her party narrative by openly proclaiming that hydroxychloroquine saved her life during her recent bout with Coronavirus and even went so far as to praise President Donald Trump. “If President Trump had not talked about this, it wouldn’t have been something that would be accessible for anyone to be able to get right now,” Whitsett said. She is now doing just fine.

What is even more alarming is how quickly people are willing to give up their constitutional rights for a virus that has a 97% survival rate. In Minnesota, where the “stay at home” order has been extended to May 4th, the virus has claimed the lives of only 39 to-date, out of 1,154 people who have tested positive for it.

Minnesota Republican State Senator Scott Jensen, who is also a medical doctor, appeared on FOX’s Laura Ingraham’s show to share his thoughts on the Coronavirus outbreak. He said in a Facebook post, “I will not apologize for refusing to give in to groupthink. The steps we are taking against COVID-19 are damaging our economy. Even more importantly though we are denying Americans’ access to medical care and instilling panic. We must refocus and restore basic freedoms and personal responsibility.”

We are now living in a Zombieland. People walk around with rubber gloves taped around their wrists and surgical masks pressed so tightly against their faces and seem quite content to do so while on their limited shopping excursions. The other day, while I was at my local CVS drugstore picking up some birthday cards, I went to the register which was set up like a hazmat station. The CVS employee behind the register wore a surgical mask that nearly covered his eyes and fogged up his glasses. He gingerly pushed a large Rubbermaid bin across the counter onto a table that separated the customer from the register by about 6 feet. I was instructed to place my cards into the Rubbermaid bin and slide it over to the register, where the cards were handled as if they were radioactive, scanned, placed into a plastic bag that went back into the Rubbermaid bin and slid back over to me after the transaction was completed. I felt like I was in the Twilight Zone. People dodged each other in the store, looking warily at the other shoppers as if you could detect a large “C” for Coronavirus somewhere on their body. Irrationality has usurped common sense.

Eight Republican run states have not implemented a “stay at home” policy and their rates of infection have not skyrocketed. Although these governors have made strong recommendations to practice social distancing, they say that they will not order people to stay at home arguing that it is a matter of government intrusion into their citizens’ lives.

Perhaps this whole thing is deliberate. In an address to the Bilderberg Conference at Evian, France in 1991, former U.S. Secretary of State Henry Kissinger said, “The one thing every man fears is the unknown. When presented with this scenario, individual rights will be willingly relinquished for the guarantee of their well being granted to them by world government.”