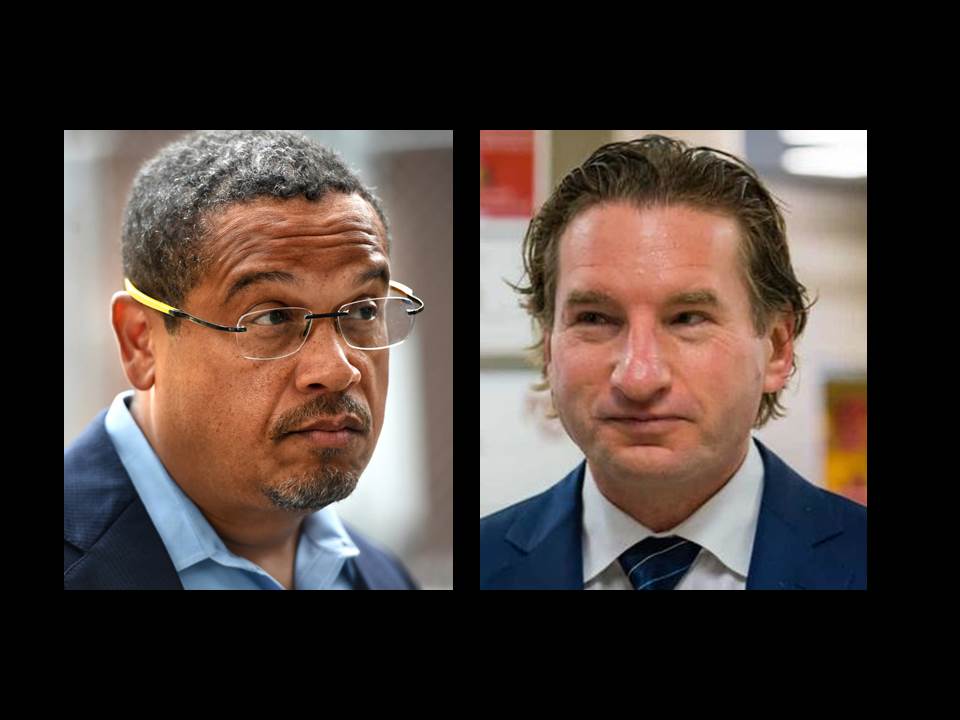 Phillips advertised a little more than a month later on September 15, 2018 that his campaign was holding a “Doorknock with Dean” event with Ellison in Eden Prairie, Minnesota, organized by the Eden Prairie Democrat-Farm-Labor (DFL) party. “Door knock for Dean and MN Attorney General Candidate and current Congressman Keith Ellison!” the advertisement on the Phillips for Congress website read – with an exclamation point for added excitement. 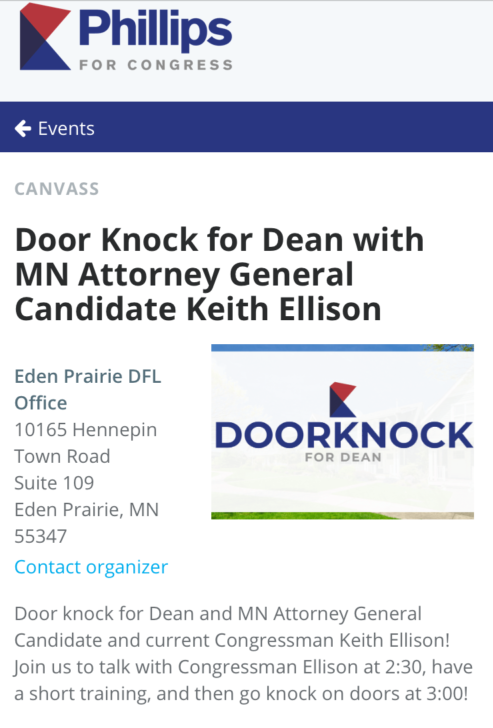 Back on August 11, Monahan’s son wrote a bombshell of a Facebook post stating his mother was physically assaulted by Keith Ellison, which rocked everyone except Ellison:

“My name is Austin Monahan and I am writing this letter on behalf of me and my brother.
My brother and I watched our mom come out of pure hell after getting out of her relationship with Keith Ellison. For several months we knew something wasn’t right and couldn’t figure it out. When we asked our mom if everything was ok, she told us she was dealing with some stress and would be ok.
In the middle of 2017, I was using my moms computer trying to download something and I clicked on a file, I found over 100 text and twitters messages and video almost 2 min long that showed Keith Ellison dragging my mama off the bed by her feet, screaming and calling her a “fucking bitch” and telling her to get the fuck out of his house.”

Since August 11, Monahan has been trying to get someone in the DFL party to pay attention to her allegations. She has produced a doctor’s report and has been posting about the abuse she endured at the hands of Ellison on Twitter ever since. Despite all this, Ellison will not drop out of the race for Attorney General, nor has he stepped down from his vice-chairmanship of the Democratic National Committee (DNC) or his congressional seat. And the biggest finger-pointer of all in the unfounded allegations against Justice Brett Kavanaugh, Minnesota’s Senator Amy Klobuchar, has remained silent about the Ellison allegations.

Ellison has denied Monahan’s allegations against him. An “independent” investigation into the allegations was done by a Democratic Party-linked law firm which found the claims against Ellison to be “unsubstantiated” because Monahan refused to release the video she said she has of Ellison dragging her off the bed by her feet. This “independent” law firm that “investigated” the allegations gives lots of money to both the Democratic Party and to Keith Ellison. In fact, Ellison has received nearly $50,000 from this law firm since 2004, according to FOX News.

A few days after Monahan’s son wrote his infamous Facebook post, a police report from another Ellison ex-girlfriend surfaced, which named Ellison as the person who assaulted her in 2005. And with the recent unsealing of Ellison’s divorce records from his ex-wife, Kim, the media is portraying him as the victim as the records revealed that Ellison himself was abused by his ex-wife.

Getting back to Dean Phillips, he is the Democrat running against incumbent Republican Representative Erik Paulsen in the Third Congressional District in what is being called one of the most expensive and closely watched congressional races in the country. Phillips’ campaign website says that he will “…always represent the principles and values I believe most of us share.” Do those values include domestic abuse? WTH?

But then again, Phillips is a “FOH” – Friend of Hillary.  Phillips was one of Hillary Clinton’s biggest bundlers in the state of Minnesota during her unsuccessful campaign for President.

Phillips also spearheaded “We Day” in Minnesota. “We Day is a progressive “stadium-sized event that brings together celebrities, local heroes, and thought-leaders to celebrate young people involved in Free the Children’s programs.” Students do not purchase a ticket to attend We Day, but earn one through participation in a program called “We Act” – which is described as a “year-long educational program that works to provide teachers and students with the tools, resources, and skills they need to bring social issues to life in the classroom.”

“We Day” received approximately $4 Million from the Clinton Global Initiative (CGI) and Dean Phillips is listed as a “Partner of the Commitment Maker” on the CGI website.

According to his bio, Phillips is a “liquor heir” and businessman whose grandmother was the famed advice columnist “Dear Abby.” Phillips grew up in Edina, attended the exclusive The Blake School in Hopkins and later, Brown University, eventually working in the family business, Phillips Distillery and later moved on to Talenti Gelato. He has two daughters, according to his biography, Daniela (20) and Pia (18).

As a father of two daughters, you would think that Phillips would be more sympathetic towards Karen Monahan, who herself is a Democrat and a victim of abuse.  Why would Phillips think it would have been a good idea to go door knocking with a man who was accused of physical and verbal abuse toward not one, but two women?  Phillips’ website says that he “will always represent the principles and values I believe most of us share.” If Phillips “principles and values” include campaigning with a man who was credibly accused of domestic assault, I say “No thank you” to Dean Phillips.