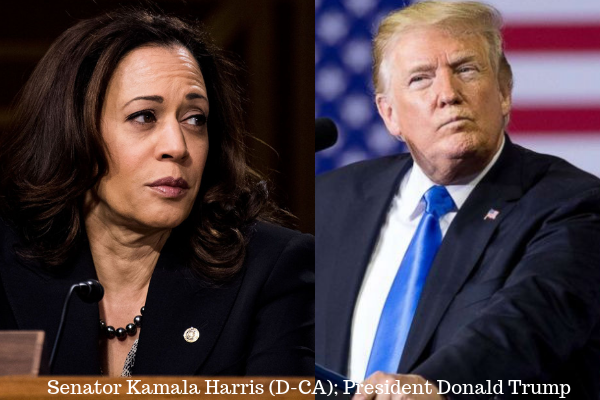 As the 2018 Midterm election approaches, Democrats have increasingly become unhinged, with Democrat leaders calling for increased incivility leading to attacks on GOP candidates, politicians and citizens.

The latest dog whistle comes from Senator Kamala Harris (D-California).  During an appearance on The Ellen DeGeneres Show on Oct. 18, 2018, Ellen asked Harris, “If you had to be stuck in an elevator with either President Trump, Mike Pence or Jeff Sessions, who would it be?” Harris replied, “Does one of us have to come out alive?”

The audience laughed uproariously along with Ellen and Harris at this response.  Imagine the backlash if instead of Harris sitting there it was Sarah Sanders or Kellyanne Conway being asked a similar question: “If you had to choose to be stuck in an elevator with President Obama, Hillary Clinton or Eric Holder, which would it be?” and their response was the same as Harris’?  The talking heads at CNN and MSNBC would have had hissy fits over that response and called for every Republican to denounce the statement.  This, however, is the status quo for the Democrat Party.

As Deplorable Housewives recently reported, two GOP candidates in Minnesota were assaulted in what seem to be politically-motivated attacks last week.  This week, another Republican, this time a campaign manager in Nevada was brutalized in what seemed to also be politically motivated. The Daily Caller reports:

A Democratic operative funded by George Soros was arrested for battery Tuesday after the campaign manager for Nevada Republican gubernatorial nominee Adam Laxalt claims he grabbed her arm and would not let go, leaving her bruised on her neck and arms.

The campaign manager, Kristin Davison, 31, says Wilfred Michael Stark, 50, who is funded by both Soros and David Brock, has since left her “terrified and traumatized” after the attack, according to Fox News. Stark was arrested by Las Vegas city marshals Tuesday night after Davison filed a “battery” charge against him.

Have there been any Democrat denunciations of the extreme violent behavior of their party members? No.  In fact, the calls for more “incivility” have seemed to increase.  Beginning earlier in the summer of 2018 with Congresswoman Maxine Waters (D-CA) telling her supporters to harass and “get in the faces” of Trump administration officials to Hillary Clinton last week saying in a CNN interview, “…if we are fortunate enough to win back the House and/or the Senate, that’s when civility can start again. But until then, the only thing that the Republicans seem to recognize and respect is strength.”

Former Attorney General Eric Holder took it a step further when speaking in front of a group of supporters, saying, “When they go low, we kick them.”  On Sunday, House Minority Leader, Nancy Pelosi, speaking about democrat economic policies stated, “We owe the American people to be there for them, for their financial security, respecting the dignity and worth of every person in our country, and if there is some collateral damage for some others who do not share our view, well, so be it, but it shouldn’t be our original purpose.”

During the confirmation of Justice Brett Kavanaugh, the country watched as Republican senators and their staffs were mobbed by angry leftist women (mainly) in the Senate halls.  Senator Lindsey Graham reported to being spat on; Senator Susan Collins was chased into an elevator by screaming women and received death threats; and Senator Jeff Flake (R-AZ) reportedly decided to urge for an FBI investigation in the sexual assault allegations made against Judge Kavanaugh after being cornered in an elevator by two Soros-paid operatives.

In Portland, mobs of roving Antifa members have shut down traffic and assaulted innocent passers-by in a show of their “strength” while the police have been told to “stand down” by Portland’s city officials.

Every day there seems to be a new story of the unhinged left’s assault on those who disagree with their views.  The veiled threats and encouragement from democrat leaders seems like dog whistles to some of their less stable followers and warnings to those on the Right that things are only going to get worse as the Midterm election looms closer.  What else does the Left have in store for Trump supporters?  How many independent and moderate democrats are moving across party lines to vote Red in November as a result of the democrat extremist behavior?  What will happen if (when!) the Red Wave happens on Nov. 6? Will the country erupt in violence and riots?

What should Deplorables do?

Deplorable Housewives of the Midwest do not condone any violence from any side.  Civility should be a value held by all when it comes to political interaction.  To fall into the behavior of the left – getting into politicians faces, engaging in violent action is not the way of those who value individualism, freedom and liberty.  Political gain through force and violence has been the way of despotic regimes and communist revolutions.  We are not those people. When a group values political gain “through any means necessary”, humanity is lost.

As Deplorables, the best way to combat the left is to help your local, state and congressional candidates campaigns – donate, door knock, work in a phone center – do whatever you need to do to help elect good conservative people to the government.  And vote.  Take ten friends with you to vote.  Drive an elderly neighbor to the polls.  Get out and vote.  We must overwhelm them with political power, not resort to violent assaults or becoming disorderly mobs of screaming harpies.  The left would like nothing more than for conservatives to take their bait and react violently.  The media would work into a frenzy reporting how a group of MAGA hat wearing people “attacked” innocent democrats.  No matter how much the left provokes, conservatives must remain level headed and civil and then win at the voting booth.