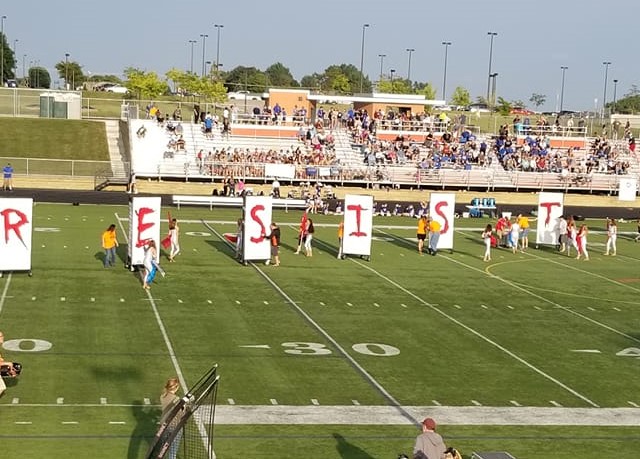 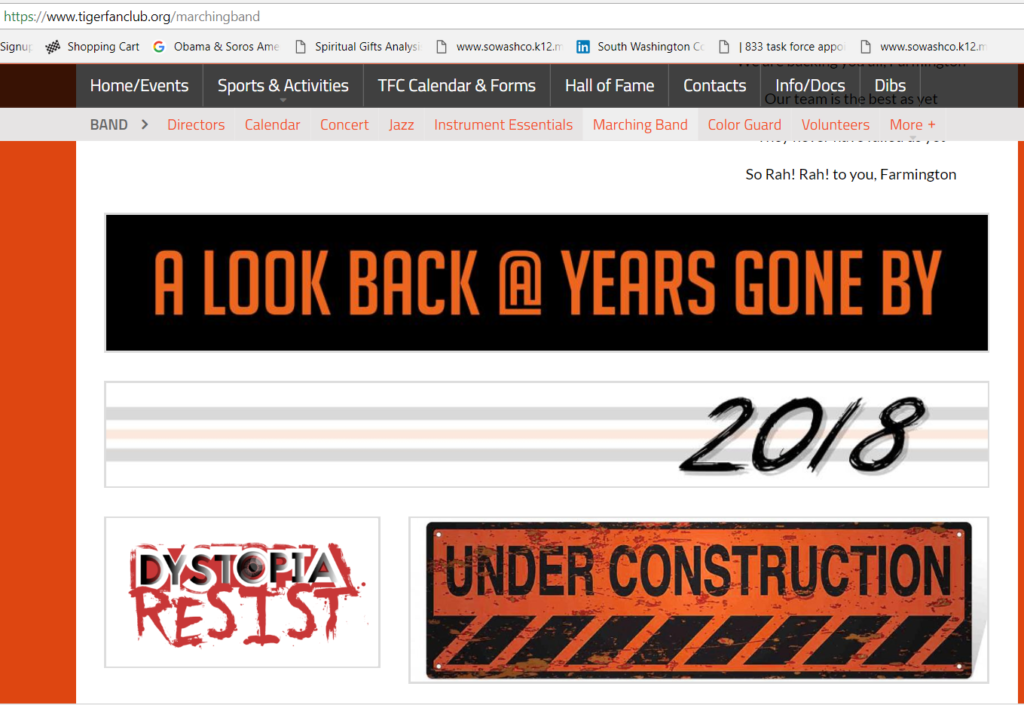 The Farmington (MN) Tigers High School Marching Band half-time show, “Dystopia,” had some parents and community members shaking their heads in disbelief this past weekend.

When does art cross the line into political messaging?

The Tigers marching band, led by Director Erin Holmes and Associate Director Bradley Mariska, performed a new show for halftime at Tigers football games and marching band competitions.  “Dystopia” utilizes music from “1984” and “The Hunger Games” along with images of “all-seeing eyes,” raised clenched fists and the word “RESIST” in the performance.  But don’t worry, say the band directors, political messaging was not their intention. According to the statement on the Tigers’ band Facebook page, the halftime show is “inspired by dystopian fiction” and “represents the age-old struggle between the powerful and the powerless, while also reinforcing important values like unity and strength. A central theme of our show is one that is important for both students and adults to consider, ‘What would it be like to live in a world where culture and personal expression are forbidden?'”

The imagery used by the directors to show the dystopian societies included the all-seeing eye from the George Orwell classic “1984” as well as the word “RESIST” and the raised-fist image associated with anti-Trump, anti-government, ANTIFA, communist and other “power” movements.  A video made by the associate band director Mariska teasing this year’s show utilizes Apple’s first Macintosh commercial from 1984 along with the all-seeing eye and the raised fist.

After the Aug. 31, 2018 football game and the first “Dystopia” halftime show performance, a photo was posted on social media questioning how one should feel about the “RESIST” and raised fist imagery, and what could be done about it if one was offended by what seemed to be leftist propaganda.  The response was immediate: people agreed that it seemed like propaganda and had crossed into outright indoctrination. Many others expressed the feeling that politics should be kept out of high school football games.

In a Sept. 4th call with Deplorable Housewives both Holmes and Mariska stated that the negative response to the show was “unexpected” and that there was no intentional political meaning or context included in the show.  They went on to say, “We did not see this (negative response) coming,” and that the community, including the band parents, “100% support” them and the show.

It may come as a surprise to them that not all the band parents are behind the show.  One parent, who asked to remain anonymous, told Deplorable Housewives:

I believe the show crosses the line. While successful art is something that is “relevant” – the bias of the artistic director is clear. People want to enjoy sports, not receive a political lecture.
The message being sent is clear: these are dark times. I’m not sure our students and athletes feel that way. If you hear the voice over of the performance the first time – it is not clear this is related to the half time show. It has the feel of a negative campaign ad.
It was intended to be edgy. Just leave politics out of the halftime show.

That parent also said that the band program is “awesome” and great for their child.  When told that the directors believe all the band parents are behind them 100%, the parent said many stay silent to protect their children from possible backlash.

The directors said that they weren’t trying to offend anyone, and “a marching band field show is always in flux.” Neither director seemed to understand that the outright use of the word “RESIST” accompanied by the raised fist could be somehow seen as having “political meaning or context” to show spectators.  A Google search of the word “RESIST” reveals hundreds of images related to groups “resisting” the current Trump administration – why would anyone think that using that word in a high school marching band halftime show might be a little “political” in context?

The Tigers band does many performances during the year, including Christmas concerts that include traditional Christian carols, and, as the band directors stressed, the band also has performed for “Military Appreciation Day” at the Minnesota State Fair as well as doing other military and veterans’ tribute performances throughout the year.  The band directors pointed to these events as evidence that their choice to include “Resist” in the “Dystopia” performance was not political or indoctrination.

However, a weekend tweet shows that the “Dystopia” message isn’t being heard by all.  The tweet, in which both Farmington band directors are tagged, shows a photo of “Resist!” with raised fists. The person posting the tweet says, “Look at the cool magnet my mom found in Massachusetts!”  One commentator said, “U prolly don’t know what them mean.” The original tweeter states, “It’s Dystopia.”

U prolly don’t know what them mean

My dear, methinks doth protest too much…

In an email sent to the Farmington band parents and obtained by Deplorable Housewives, Mariska reiterates the assertion that the program was meant to show dystopian fictional societies, not be used as a political message.

First and foremost, our show is a presentation of themes related to Dystopian societies as represented throughout the history of literature. We considered both 20th Century classics like George Orwell’s “1984” as well as more modern stories with which our students are familiar, such as “Divergent” and “The Hunger Games.” We have also incorporated imagery and themes from dystopian films like “V for Vendetta.” The plot of our fictional story is a common one in the world of dystopian literature and film…

Mariska then goes into a long rationalization as to why the use of the word “RESIST” should not be perceived as political in the context of the show:

Our show combines the concepts of personal expression and unity (central tenets of marching band and color guard) along with the themes of freedom and free speech (core beliefs to all Americans). The story is fictional but there indeed are historical lessons embedding in the telling. The concept of “resistance” goes back centuries and has been utilized by oppressed segments of society – including the founding of America itself – through a variety of simple words and symbols.

The universal nature of these words and symbols is what makes them so effective and relevant not only to our show, but to all dystopian works of art. In no way is our show meant to be political or present commentary on the current political climate or presidential administration. You can be sure that we are not trying to – nor do we want to – wade into the waters of contemporary politics.

First of all, as Deplorable Housewives said to the directors during the Sept. 4th phone call, the very idea of inserting the word “RESIST” along with the red raised fist in a marching band field show in today’s political climate and expecting that NO ONE would find that political is preposterous.  It either shows that the directors are extremely naive and completely out of touch with the world and US culture in 2018 OR that they truly believed they could use the “Dystopia” theme to veil an absolute political message.  If the former is true, then they should be fired due to the fact that they are too lacking in intelligence to be teaching ANYTHING.  Given the fact that the Farmington Tigers Marching Band is a top-notch program, with elaborate and well done field shows, it is obvious that the directors are NOT lacking intelligence.  Which leaves only one other option: They knew exactly what they were doing.  The placement of “RESIST” accompanied by the raised fist symbol in the field show seems to be a deliberate attempt at promoting a cause of which both directors seem to be well acquainted, if their Twitter accounts are any indication.

A perusal of the band directors’ twitter accounts revealed that while Holmes’ twitter feed is filled with positive tweets about the band, a look at the accounts she follows showed no conservative voices.  In fact it was filled with left-leaning and Democrat politicians and pundits, including an account called “State of Resistance” (@AltStateDept) and “Rogue NASA” (@RogueNASA). 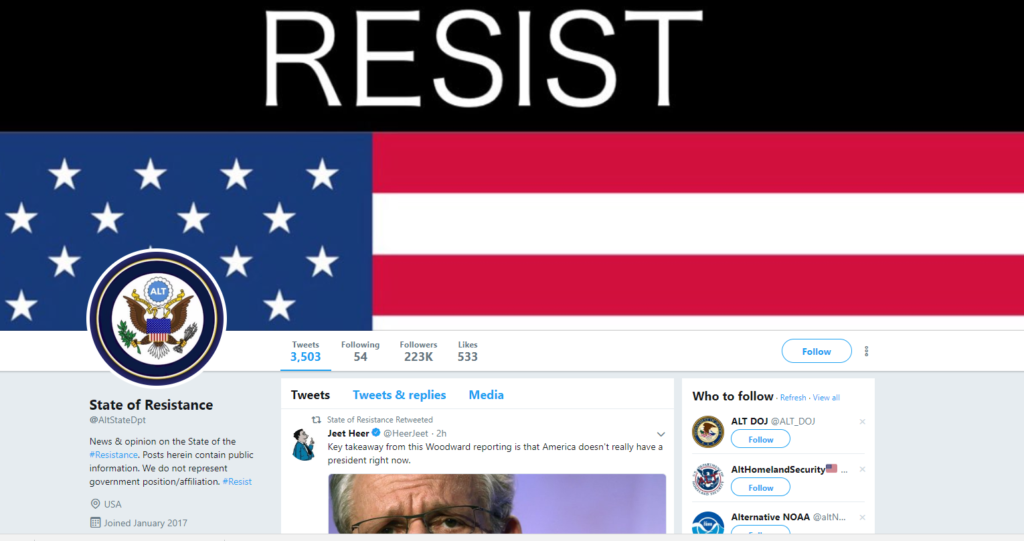 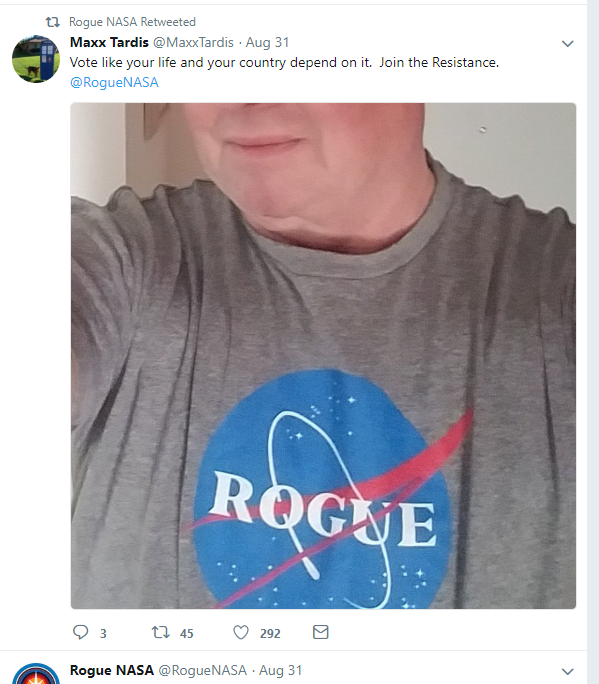 Unlike Holmes, Mariska’s twitter follows some libertarian/conservative voices, but also includes Bernie Sanders and other far-left politicians/pundits as well as resist accounts such as “@NotAltWorld.” 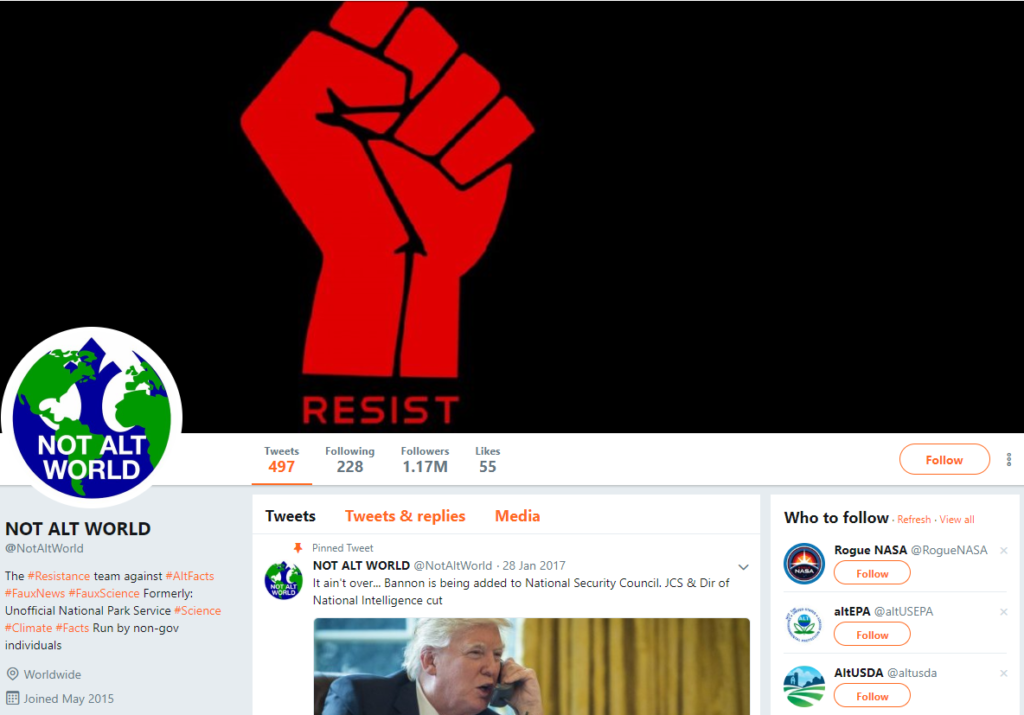 Mariska’s email to band parents continued with a claim that the show was being attacked and that “#resist” is just a little ol’ “anti-establishment movement” utilized by “political progressives” – minimizing the real movement that promotes and encourages violence against Trump supporters or “Nazis” (as those dainty “political progressives” in the ANTIFA resist movement like to call anyone sporting a MAGA hat).

Despite all of this planning and collaboration, our show has been recently attacked for being “anti-Trump,” “liberal propaganda,” with a staff intended to promote a leftist “agenda.” These disparaging words are being leveled against our show primarily because our props spell out the word “RESIST” in the finale. (Note: Over the past 18 months, political progressives have created an anti-establishment movement that utilizes the hashtag #resist).

So again, nothing to see here, folks – the band directors, despite the events over the entire candidacy and adminstration of President Trump, really truly believe that using “RESIST” in the field show should have no negative connotations for anyone watching the show.  The directors say there was no political motive, so therefore there must not have been, right?

Apparently there were those in the ISD 192 school district administration who disagreed with the directors.  Mariska writes: “…we have been instructed by District Administration to modify the end of our show, including the words and symbols used at the conclusion (“RESIST” and the raised fist symbol)…”

Mariska could have left it there, but of course, in typical #RESIST movement-progressive fashion, he manages to turn the band directors into victims of oppression and censorship, when he says, “There is certainly an inherent irony in the fact that our show is being censored…” Really?  What about the fact that the directors seem to be seriously lacking in common sense?  Mariska touts how they want to teach the students “unity” – please explain how the use of a word associated with violence against at least 50% of Americans promotes “unity”?  It doesn’t.

Due to copyright laws relating to the music included in the show, the school district cannot publish a full video of the program.

KSTP-TV report regarding the changes from RESIST to UNITE in the band program.