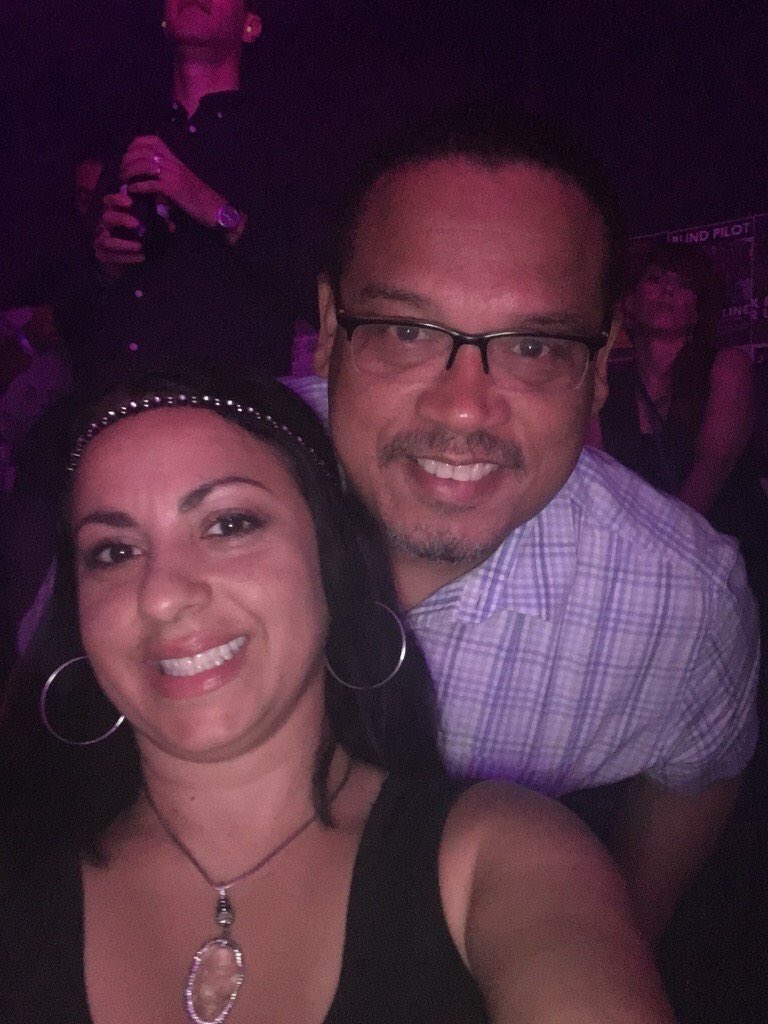 In a Facebook post that has gone viral, the son of a Karen Monahan (an alleged ex-girlfriend) accuses Keith Ellison of domestic abuse.

“My name is Austin Monahan and I am writing this letter on behalf of me and my brother.
My brother and I watched our mom come out of pure hell after getting out of her relationship with Keith Ellison. For several months we knew something wasn’t right and couldn’t figure it out. When we asked our mom if everything was ok, she told us she was dealing with some stress and would be ok.
In the middle of 2017, I was using my moms computer trying to download something and I clicked on a file, I found over 100 text and twitters messages and video almost 2 min long that showed Keith Ellison dragging my mama off the bed by her feet, screaming and calling her a “fucking bitch” and telling her to get the fuck out of his house. The messages I found, were mixed with him consistently telling my mom he wanted her back, he missed her, he knew he fucked up and we wished he could do things different, he would victim shaming, bully her, and threaten her if she went public.”

Karen Monahan seems to collaborate her son’s accusation with tweets defending him, saying in one tweet that she is proud of her son’s courage and in another that “he isn’t lying.”

I am so proud of my son for his courage. But this situation impacted me. If you have anything to say, please say it me and leave him out of it. No nasty comments to him https://t.co/UC84loHz1m

I shut down my facebook 2 days ago because I didn’t want my kids seeing post people were posting to me. I really can’t activate it now cause will be worse for them. My son is getting bullied on FB, DO NOT BULLY MY KIDS. tweet to me and leave them out of it

That is my son who bravely shared that post. He isn’t lying about anything. This has nothing to do with trump or politics to us. It is about abuse and the person just so happened to be a politicians.

That was my son who posted and its true. He wouldn’t lie about his own mom

Ellison’s involvement with Monahan seems to be supported by tweets of his own.  Twitchy reported several instances where Ellison is pictured with Monahan along with another tweet of Monahan and her son photographed by Ellison himself. Twitchy writes, “But this one is probably the most interesting, a shot of Karen with her son Austin (who allegedly wrote the Facebook post) tweeted by … you guessed it … Ellison.”

One of Minnesota’s own EJ superstars, Karen Francis Monahan and her son, Austin, on her birthday! pic.twitter.com/qS4mSGl3lW

These allegations are not the first to be leveled at Rep. Keith Ellison.  In 2006, The Wright County Republican published an article written by Amy L. Alexander in which she accuses Ellison of abuse during an extramarital affair the two had in the ’90s and then again in the mid-2000s.  In the article, Alexander describes verbal and emotional abuse she endured during their relationship, and how Ellison and his people tried to silence her. (Read entire article here.)

At the time of publication no “mainstream media” outlets had followed up on the allegations. Dozens of tweets asking why the media is ignoring these serious domestic abuse allegations have been posted, but yet only crickets are coming from the MSM.

Why is MSM IGNORING THESE KEITH ELLISON ABUSE ALLEGATIONS? HE IS ONLY THE DEPUTY CHAIR OF THE DEMOCRATIC NATIONAL COMMITTEE….. https://t.co/LwkH0KTm40

Ellison has made no response to the latest abuse claims.

Ironically, during the height of the #MeToo movement when fellow Democrat politicians Senator Al Franken and Representative John Conyers were being accused of sexual harassment, Ellison was interviewed by Amy Goodman on DemocracyNow! in which he gave his opinion about the accusations.  In the interview, Ellison said every member of congress should examine their conscience and ask, “is it not a moment now where you apply some standards to yourself that you have asked others to live by?” (Read full interview here.)

Will Ellison stand up and live by the high standards he sets for others – particularly President Donald Trump – by coming forward to address the claims made by the Monahans?  Or will he run from the “transparency and sunshine” he advocated for in the DemocracyNow! interview?  Does he truly believe in his own hope for “a society where every person, women, can go to work and just do their job without any fear of being harassed, mistreated, treated like second-class-citizenship individuals”?  Does that hope only extend to the workplace? Or does it include Ellison’s own private relationships?