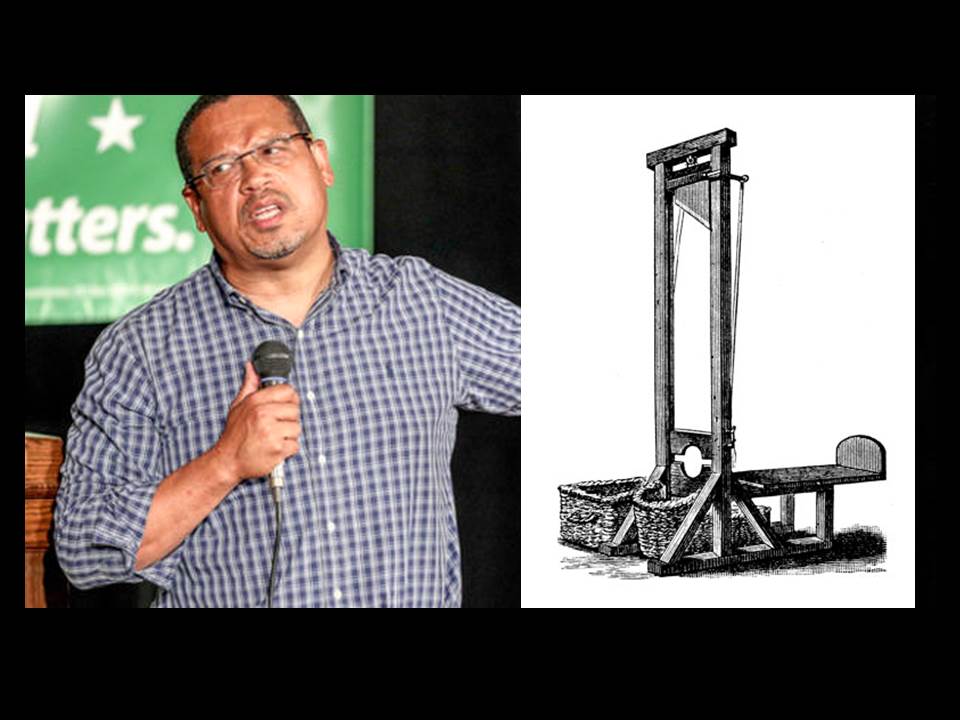 UPDATE: Ellison staffer William Davis was suspended for one week without pay for writing on Facebook that Republicans should be “guillotined” after Election Day.

William Davis, the Democratic-Farm-Labor (DFL) Deputy Communications Director and so-called “attack dog” of the Keith Ellison campaign said Republicans should be “guillotined” following the 2018 midterm elections. Davis had his hands slapped and was issued a one week suspension.

Democrat Party Executive Director Corey Day said Davis regretted the post and since deleted it. Davis will be suspended for one week without pay starting Monday, according to the Associated Press.

“The comments made by William Davis are disgusting and appalling. The call for decapitation of members of the Republican party has no place in our politics. This is a new low,” said Kory Wood, General Consultant for the Wardlow campaign. “Davis’ comments mirror similar rhetoric from Keith Ellison’s past. Ellison’s support for cop killers, the Antifa movement and mob rule further shows why he is unfit to serve as Attorney General.”

The Wardlow campaign called for DFL Chairman Ken Martin and Keith Ellison to rebuke Davis’ comment and called for Davis’ termination from the Minnesota DFL immediately.

The violence against candidates is getting out of hand.

Shane Mekeland, a Republican candidate who is running for Minnesota State House of Representatives in District 15B wrote a horrifying Facebook post on Sunday night that he was assaulted and has suffered a concussion.

Mekeland wrote, “On Friday evening, I was assaulted in Benton County.  I suffered a concussion and the incident is now in the hands of law enforcement.”

Mekeland states that he never met his assailant, and the words he used before the attack leads Mekeland to believe that the assault was politically motivated.

“When I chose to run for office, I expected to be politically attacked, but never physically.  I weighed whether or not to share this today, but ultimately, I think we all need a reminder to be civil to each other regardless of our perspectives,” Mekeland wrote. 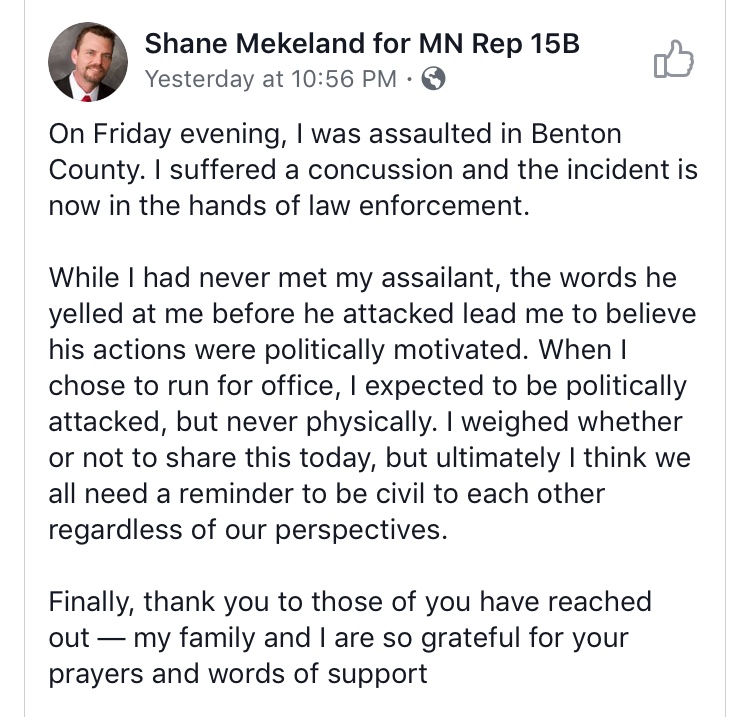 Mekeland’s website states that he is “fiercely pro-life, pro-family and pro-Second Amendment.” He is running to replace Rep. Jim Newberger, who is now running for the United States Senate against incumbent Senator Amy Klobuchar (D-MN).

On October 14, Richard Wulf, a candidate for Mayor of Ramsey, Minnesota wrote on a Facebook post that his personal property and pets have been attacked by unknown assailants.

“Someone wrote “F U” on the back of my truck, released air on my back tire and stole one of my car magnets. 6 ducks and 3 chickens have mysteriously died, which I believe there is rat poison by the duck coop.  And today, we had to rush one of our horses to the emergency vet hospital because she looked like she was dying.  A lot of liquid was coming out of her nose, she was refusing to move and her eyes were glazed over. Luckily a vet came out and gave her meds. She is at the vet hospital right now and the next 12 hours will tell us if she is going to make it. All this in less than one week,” Wulf wrote. 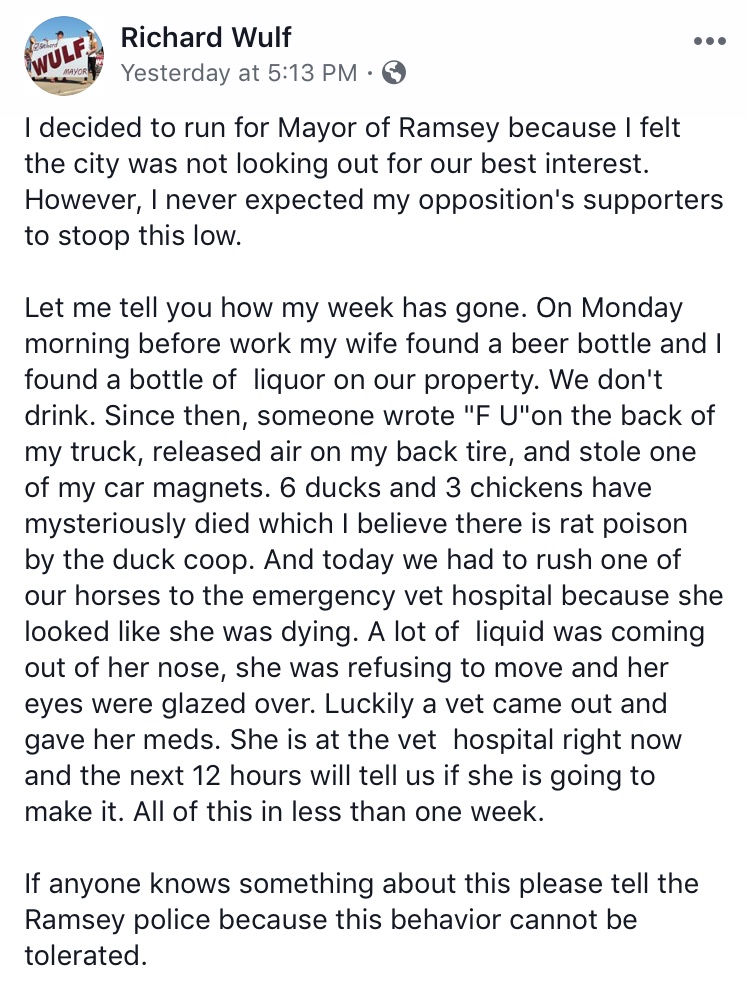 Wulf’s platform, according to his website, includes reducing the amount of property tax increase and creating a family centered community.

Last week, former US Attorney General Eric Holder was quoted as saying about Republicans, “When they go low, we kick them. That’s what this new Democrat Party’s about.”

On June 14, 2017, Republican Representative Steve Scalise of Louisiana was shot and seriously injured by left-wing activist James Hodgkinson while practicing for the annual Congressional Baseball Game for Charity, which was scheduled for the next day. Officers shot Hodgkinson, who died later that day at a Washington, D.C. hospital.

Sarah Sanders, Ted Cruz and Mitch McConnell have all been accosted in public places for being Republicans by angry progressive crowds.  In the case of Sarah Sanders, she was refused service by the Democratic owner of the Red Hen Restaurant in Lexington, Virginia because she worked for President Donald Trump. Yet, in “Democratworld,” a Christian-Conservative bakery must be forced to bake a wedding cake for a same-sex couple or face a shut-down of their business by angry progressive mobs.

California Representative Maxine Waters has encouraged Democrats to get in the faces of Republicans and “push back.”

Last Thursday night, the New York Republican headquarters in New York City was vandalized around 1:30 a.m. where windows were shattered and doors were spray painted and glue was injected into the locks and on the door handles. A threatening note was found at the scene with an ominous message to Republicans that the “attack is merely beginning.”

Civil discourse and respect for our fellow countrymen has been lost due to differing political opinions. It is truly a sad, sad day for the United States of America that we have come to this.