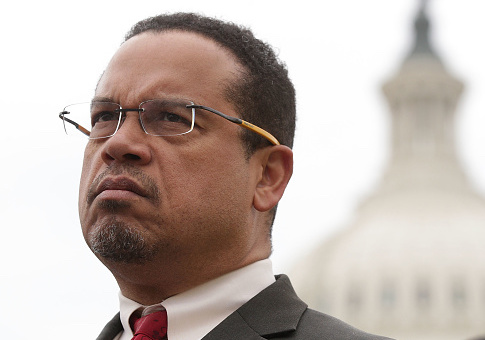 Deputy Chairman of the Democratic National Party and Minnesota Congressman Keith Ellison (D-MN5) is digging in his heels, telling the Minneapolis Star Tribune that he will not drop out of the race for Attorney General.

The allegation is that Ellison was abusive towards his former girlfriend, Karen Monahan. The allegation was revealed on Saturday night – just three days before the Minnesota primary – on Monahan’s son’s Facebook page. Monahan then took to social media to say what her son wrote was true. Monahan’s son said he saw a video on his mother’s computer that recorded an incident where Ellison screamed at Monahan and attempted to drag her off the bed by her feet.

Monahan released a statement describing the abuse she endured with Ellison:

“One night I confronted him very calm about a lie he had just told me straight to my face. What happened next was a rage that I had never witnessed to that magnitude. He was becoming a person I had never seen before. The next morning, he came into the room I was sleeping in. I was laying across the bed with my headphones on, listening to podcast on my phone.  He said he was about to leave town for the weekend and told me to take the trash out. Given the explosive outrage that occurred the night before, I just should shook my head yes. I didn’t look up at him or saying anything. That is when he tried to drag me off the bed by my legs and feet, screaming “bitch you answer when I am talking to you. I said take out the trash, your [sic] a bad guest (even though we were living in the same place). He kept trying to drag me off the bed, telling me to get the fuck out of his house, over and over. I froze. He had to leave and get on the plane. He knocked the shoe off my foot and told me I better be gone when he gets back (which was in two days). This happened in 2016. The gaslighting, manipulation, name calling and cheating started in 2014.”

After that damning allegation, Jeff Kolb, a city councilman from Crystal, Minnesota posted on Twitter a police report from 2005 naming Ellison as the person who assaulted another woman.

But that’s okay Minnesota voters!  Keith Ellison is reassuring voters that it is okay to vote for him! He’s denying everything. Don’t you feel better now?

On Monday, the left-leaning women’s group Ultraviolet put out a statement saying that Ellison must withdraw from the Attorney General race and resign from congress. “A domestic abuser does not belong in any position of power but particularly not as the top prosecutor in the State. Keith Ellison should withdraw his candidacy for Minnesota’s Attorney General and resign from the House of Representatives,” said Ultraviolet’s president Shaunna Thomas.

On Thursday, the National Organization for Women (NOW) called on Ellison to drop out of the race, saying “Keith Ellison must withdraw from the race and not put Minnesotans through another cycle of political scandal. They’ve been through enough.”

Indeed. Minnesotans have been through a lot this year.

But Minnesotans are also gluttons for punishment as they decided to elect Ellison as the Democratic nominee for Attorney General anyway after the domestic abuse allegations were revealed.

To put more salt into the political wound, Democrats also voted for Ilhan Omar, the woman who allegedly married her biological brother while she was married to the father of her children – possibly committing both immigration and marriage fraud, to replace Ellison in the United States Congress.

Minnesota is just coming off a huge scandal where U.S. Senator Al Franken was forced out of the senate earlier this year after a photograph emerged of him cupping the breasts of a woman which was promptly followed by many other women coming forward with their own stories on how Franken sexually harassed them.

Ironically, just before Franken’s resignation, Ellison had tweeted out on December 6, 2017, “Sen. Franken is scheduled to speak tomorrow.  I think he will do the right thing and resign.”

Ellison should take his own advice.