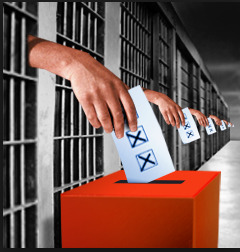 The push to allow felons to vote before the restoration of civil rights continues. An article in February, 2018 by the New York Times compares the rights of felons to vote to the women’s suffrage movement and use the  14th Amendment’s promise that no state “shall abridge the privileges or immunities of citizens of the United States” as justification. New York governor, Andrew Cuomo who is concerned about his upcoming bid for reelection, restored the voting rights of 35,000 felons still on parole via executive order . The push to allow felons to vote prior to serving their complete sentence will impact elections for decades, turning states from red to blue.

In this article, I will systematically debunk the narrative used by the left to allow felons to cast a ballot before their civil rights are restored. I will go through the steps used by the Minnesota Voters Alliance (MVA) to defeat the felons voting initiative in Minnesota and provide activists with counter arguments they can use to defeat this change in election law in other states throughout the country.

Since 2014, Democrats and liberal activists in Minnesota, joining forces with nationally funded lobbyists, set a goal to push through a broad agenda of corrupt election law changes, with a centerpiece of allowing non-incarcerated felons to vote. The cabal created a false narrative, served it up to unthinking Republicans, solicited self-interested business groups and county attorneys, and conducted private pitches to editorial boards, but generally stay out of public view.

As Phyllis Schaffly has pointed out, there is a longstanding national effort by Democrats and some libertarian organizations to elect liberal candidates by enabling felons and non-citizens to cast ballots, either legally or otherwise. The basis for the left’s commitment to this scheme is the well-known fact that felons vote overwhelmingly for Democrats, about 5 to 1 over Republicans, according to an authoritative study in the Annals of the American Academy of Political and Social Science. The estimated 47,000 felons who would be allowed to vote while still on probation are particularly salivating to Democrats in Minnesota, where Al Franken won election to the U.S. Senate in 2008 by a margin of 312 votes.

These are the ruinous provision sought in Minnesota in 2015:

The false narrative is based on classic liberal methodology: create a class of victims, adopt the stance that you are righteous, and demean those who argue the merits against you. The new class of victims in their argument are felons who “live in the community and pay taxes” and are being denied their rightful participation in society and who, studies show, are less likely to re offend if able to vote. They deserve a “second chance.”

For proponents, the story-line is all about the “rights” of felons, and nothing else. Their marketing cast every felon as a wrongfully convicted jaywalker whose whole life, upon release from 30 years of confinement, revolves around teaching citizenship to his granddaughter by taking her to the polling place on election days.

And, of course, there was the bogus claim that felons vote equally for Republicans and Democrats.

Here is the straight talk that proponents and their dupes must be confronted with:

After a public debate was stirred and the information that felons are already given a “second chance,” after they have earned it, proponents began emphasizing another radical allied group, Restore the Vote; comprised of many of the usual suspects, such as the ACLU, SEIU, League of Women Voters, and NAACP.

Restore the Vote also brought on-board well-funded special interest groups like the Association of Minnesota Counties and the Minnesota County Attorneys Association whose interests were mainly to reduce their burden in investigating claims of voting fraud. The claim to “bipartisanship” was built from a trio of inconsequential groups with “Republican” or “Liberty” in their names, Blue Republican Minnesota, Liberty Minnesota, and the Republican Liberty Caucus Minnesota.

They spent months pulling these names together, creating logos and flyers, building a website, spreading the word around Twitter and Facebook, and holding events like the January 29th “Second Chance Day on the Hill 2015.”

The singular aim of all this effort was to provide cover and comfort to a small number of Republican state legislators, showing them that there was safety in voting outside the mainstream of their caucus.

Proponents and lobbyists drafted the bills in the Democrat-controlled Senate which held hearings with no opposition (since it was low profile, who knew?) and passed the entire smorgasbord in the elections committee.

They also flooded the zone with provisions sprinkled throughout other committees like transportation, judiciary/public safety, finance, and tried to insert driver’s licenses for illegals into the agriculture bill.

Several demonstrations were held on the steps of the Capitol. Flyers were hand-delivered to legislators claiming we were telling “lies.”

Democrat leaders pressed for their election agenda right up to adjournment at midnight on May 18, making a threat to withhold agreement on other issues and offering amendments with hidden agendas.

Republican support in the House began to weaken following a Twin Cities morning talk radio debate between the MVA’s Andy Cilek and a paid lobbyist from Minnesota Second Chance. After an MVA OpEd in the St. Paul Pioneer Press, three of the nine Republican House co-authors of a related election bill in the House withdrew their names. Subsequent MVA OpEds in Duluth and St. Cloud brought the issue to light equipping citizens with the knowledge for expressing concern to their legislators. Cilek also conducted several call-in radio interviews in Duluth and St. Cloud.

Republicans in both chambers came to see that their constituencies were virulently opposed to all of the partisan Democrat proposals which would lead to a takeover of Minnesota government for the foreseeable future.

In the end, every Republican senator voted against the Senate elections bill which Democrats passed on their own. House Republican leadership and members united, refusing to accept any portion of the Democrat Senate’s elections policy omnibus bill.

Only a few years ago, disastrous election law changes were on a subliminal glide path to enactment in the Minnesota legislature. As a result, however, of continuous phone calls and emails from concerned constituents to Republican legislators generated by MVA OpEds, appearances on radio talk shows across the state, and emails to members, the sabotage of Minnesota elections by national liberal organizations failed in the 2015 legislative session because Republican legislators were armed with the truth.