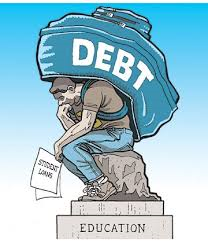 Bernie Sanders, Hillary Clinton and the new darling of the American Socialist Party, Alexandria Ocasio-Cortez are constantly espousing “free college for all”.  Of course, everyone thinks this is a great idea because it’s, you know, free!  There will be no tuition payments to worry about.  There will be no student loans to pay back.  All you have to do is go to college, and voila!  Guaranteed success?

But, have Sanders, Clinton and Ocasio-Cortez thought about who is actually going to pay for all this free college? These three, who are extremely “generous with other people’s money,” assume that the United States Government will pay for everyone’s college.  That’s right.  The government that is over $20 Trillion in debt — thanks to the former spendthrift-in-chief — is supposed to start handing out money, with no strings attached, to everyone who wishes to attend public college.  And you and I, the taxpayers, are going to be paying for all this free college FOREVER.

The average annual cost of a private four-year college is $46,950.  The average annual cost for a state school is $20,770 if you live in-state and $36,420 if you live out of state.  According to Statista.com, in 2016, about 5.3 million students were enrolled in private colleges and 14.6 million in public colleges. When you do the math, the government will be paying out, on the low-end, $303,242,000,000 to public colleges so that students will have a “free” education. (I used the in-state public college tuition for this figure, but it still is a lot of money).

There have been many stories where kids who desired to attend college but couldn’t afford to go were able to make it work and did it through something called “hard work”.  My friend, Stan, is a shining example of hard work, determination and dedication.

Stan’s father was an immigrant from Havana, Cuba with only a grade-school education who came to the United States in the 1940’s when he was in his 20’s. Without a formal education, he worked in a jewelry factory in New England.  His salary was just about enough to provide for his family, but left very little for him to save for his children’s education.

Stan dreamed of becoming an attorney.  He knew that he wanted something better for himself and that he wanted to achieve his dream.  He worked hard in high school and got excellent grades. He was on the debate team, the speech team, the Model U.N. team.  He worked as a line-cook in local chain restaurants during his high school years to earn some extra money to put towards college. When Stan graduated from high school, he received some small scholarships, but it wasn’t enough money to pay for his tuition for undergrad. But that didn’t stop him. He found a way to make it work.

He applied to college and got accepted into several.  In order to attend, he took the money he had earned as a line cook and received in scholarships and he also (gasp!) applied for a student loan.

Imagine that?! Borrowing money that he would eventually have to pay back, with interest, starting upon his graduation! Never once did Stan say it wasn’t “fair” or unjust that he had to borrow money to pay for his education. Not only did he take out student loans, but he worked three jobs to earn more money to help offset the cost of attending college.  And despite attending college and working three jobs – and being involved in Student Government – he was still able to work hard get good grades!

After four years of college, Stan was accepted into several law schools. Again, he took out more student loans to attend law school and worked two jobs throughout his three years at law school.  He held these jobs when he was studying for the New York Bar Exam – which he passed on the first try.  When he graduated from law school, he did have a lot of debt, but he also had a career.

Stan got hired immediately after graduating from law school. His job wasn’t high paying, however he paid his dues and became an excellent attorney.  Once he was employed, he started paying back his student loans.  It took over 20 years, but guess what?!  He paid them off.  Every penny. With interest. And now, he is a successful attorney who helps others. And he never forgot how he got to where he is and where he came from.  And that makes him appreciate his success even more. I couldn’t be prouder of my friend Stan.

When you hear the Democrats promising free education to everyone, it doesn’t guarantee everybody immediate success. The candidates making promises of free tuition while sticking their hands in your pockets in order to get votes from this new generation of gullible “press-the-easy-button” people are only out to enrich themselves.  Ask Bernie “I have three houses” Sanders and Hillary “Chappaqua Mansion” Clinton how they made all their money in a lifetime of politics. And everyone conveniently forgets that Bernie’s wife Jane, former president of now defunct Burlington College is at the center of a scandal that the Weekly Standard called an “appaling inappropriate business deal.”  It’s the old “socialism for thee but not for me!” story.

Money can not buy the drive to succeed and the will to overcome all odds to achieve your dreams.  And when you achieve success on your own, without relying on the government or on others, it makes that success that much sweeter.