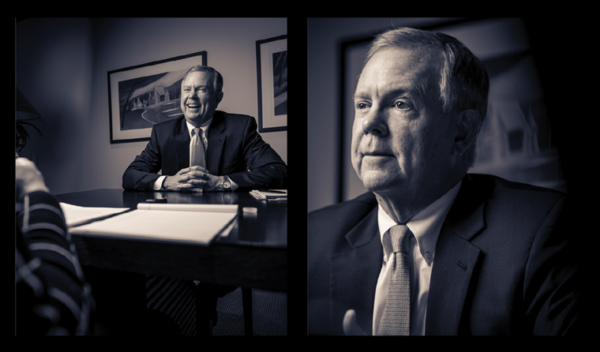 John Gilmore, co-author of “Bachmanstan: Behind the Lines,” and contributor to The Hill and Alpha News, discusses The Minnesota Business Partnership and the organization’s Executive Director, Charlie Weaver.

Republished with permission from John Gilmore.

Below is the column I submitted to Alpha News, where I have a regular Sunday column. It was rejected on the title alone. I’m publishing it here (originally published on Minnesota Conservatives) because I write for myself and always will. ~ John Gilmore

The Minnesota Business Partnership is perhaps the premier business lobbyist outfit in Minnesota. Yes, the Chamber of Commerce is another group but the MBP is unique in that its membership is comprised solely of CEO’s and senior executives of Minnesota’s largest companies. The great unwashed have the Chamber, the business elites have the Partnership.

Charlie Weaver is the executive director of the Partnership and is paid handsomely, reportedly $700,000 or more, to shill for their interests which they pretend are yours. They are not. Weaver was Gov. Pawlenty’s chief of staff when he took the job he’s held for the last fifteen years. One feature of the Uniparty–or ruling class, take your pick–is its seamlessness.

A friend sent me a recent interview of Weaver by Liz Fedor of Twin Cities Business magazine. My friend knows me well because the interview is both appalling in its myopic corporate agenda and nakedly honest in its disregard for the concerns of the working class and middle class in Minnesota. Weaver’s ideology, for that’s what it is, has contributed to the hollowing out of America, the decimation of our manufacturing base and the continued stagnation of wages across many occupations.

This ideology is dressed in the rags of Conservatism, Inc., possessing the dulled patina of “free trade” and other nostrums that have benefitted corporations at the expense of average Americans. Until recently, you were expected to go along with the decline in your and your children’s life without noticing and, if you did, then without complaining.

What stood out among them all was Weaver’s single minded focus on cheap labor.

In Fedor’s interview of Weaver, she touched on a number of subjects: business challenges, immigration and the fake labor shortage in Minnesota, President Trump & trade, education, transportation, taxes, preemption and the laughable “worker retraining.” What stood out among them all was Weaver’s single minded focus on cheap labor.

Big businesses favorite fake mantra is that there is a worker shortage. The reality is they don’t want to pay higher wages. Their solution? Open borders and a flood of low skilled, low educated immigrants.

Weaver is explicit: “We also need immigrants in this state to successfully compete and provide talent for our companies to continue to prosper here.” What is meant by this is that wages can continue to stagnate or decline in order to keep corporate profits healthy.

A nation’s culture? Its traditions and unique history? None of this matters to Weaver and those whose interests he shills for.

He goes on: “We do need open borders. We need immigrants in this state. It’s all across the spectrum. It’s the doctors who come in and work at the Mayo Clinic to the person who is working in a slaughterhouse for Hormel to the construction workers for Mortenson and Ryan. An immigration policy that promotes legal immigration and getting to a place where those who are here illegally can get to legal status is really important.”

Weaver never deals with the quality of current immigrants, which on balance is low because chain migration is the mechanism by which they get here. Why should future Americans be imported simply because they have a relative already here? No serious discussion of the issue will be found in this interview of Weaver.

He does get points, though, for sheer brass. Open borders means the extinguishment of nations. As long as people exist who can be moved like so many pieces on the corporate playing board, all is well.

A nation’s culture? Its traditions and unique history? None of this matters to Weaver and those whose interests he shills for. One homogenized mass of people working for substandard wages is what the globalist, corporatist task masters demand and he’s in Minnesota doing his bit to bring it about.

On trade, Weaver is laughably unserious. He says “open and free economies across borders to trade goods is vitally important” and goes on to claim that Trump refusing to join TPP as well as renegotiating NAFTA is “troubling,” adding “[u]ltimately it hurts Minnesotans and it results in fewer jobs.”

Plainly put, this is a lie. Poor trade deals are not free trade and have hollowed out America. Weaver thinks this is just fine because cheap labor above all other social good is his core principle.

President Trump’s forays into trade have already met with remarkable results, despite clucking and bleating from the usual swamp creatures. South Korea is opening its markets more to of our cars, China blinked and is reducing tariffs on our goods, as well as promising to reduce its enormous theft of our intellectual property and NAFTA seems to be on the verge of being renegotiated to the betterment of America. This is what winning looks like.

It’s bad for the average American to have low skilled immigrants compete for jobs on the lower rung of the economic ladder. But they aren’t Weaver’s concerns and never will be.

Weaver returns to unfettered immigration because bad trade deals go hand in hand with it. “Given the challenge of increasing our workforce from within Minnesota, we need immigrants. We need their talent, skill, brainpower and hard work. So anything that would limit that, whether it is building a wall or just arbitrarily kicking them out of the country, would be devastating to Minnesota’s economy.”

Again, this is false and the data do not support this rosy approach. It’s bad for the average American to have low skilled immigrants compete for jobs on the lower rung of the economic ladder. But they aren’t Weaver’s concerns and never will be. “The presence of foreign-born workers in the local labor force is correlated with a higher likelihood of native-born less-educated workers dropping out of the labor force or moving across state lines.” This, from the Federal Reserve Bank of Cleveland.

Weaver knows all this, he simply is advancing a narrative in the service of his paymasters. The veneer of non or bipartisanship should fool no one. Of course there is unanimity among the ruling class.

Reduced to his essentials, Charlie Weaver is Minnesota’s George Soros.

Every year we’re treated to an annual dinner of the Minnesota Business Partnership. As kabuki, it’s surely of a higher grade than the embarrassing parade of paid D-list celebrities trotted out to praise L. Bill Austin at Starkey Hearing’s annual “gala.” But it remains just as manufactured and inauthentic. Local republicans tend to preen & clap, their forte really, over both the speaker and the execution of the dinner. As to the substance and whether the MBP’s agenda helps average Minnesotans, there is silence.

Minnesota big business has every right to band together and advocate for their agenda. The problem comes with Minnesotans believing, mistakenly, that they do so on behalf of their economic and cultural interests.

Reduced to his essentials, Charlie Weaver is Minnesota’s George Soros.

2 thoughts on “John Gilmore: The Essence of Minnesota’s George Soros”