While America argued about Roseanne’s “racist” tweet and Samantha Bee’s use of a derogatory word to insult Ivanka  Trump, an anonymous Twitter user was being doxxed by a Huffington Post reporter. 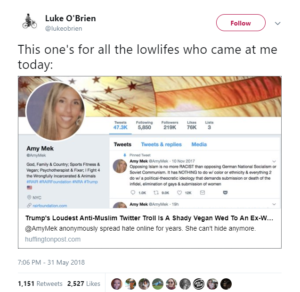 With over 225,000 followers, Amy Mek (@AmyMek) is a top Twitter account.  She also is pro-Trump, pro-Israel and is an outspoken voice against Shariah law and radical Islam.  Due to the dangers that come with being a critic of radical Islam, Mek had taken care to remain as anonymous as possible.  HuffPo reporter Luke O’Brien disagrees with Mek’s views, so set about to “out” her to punish her for the “hate” he claims she posts.

Just revealing Amy Mek’s real identity wasn’t enough for O’Brien: he also went so far to get her husband fired from his job.  Mek is married to Sal Siino, who until O’Brien intervened, was the Senior Vice President of Global Content Distribution & Business Development at WWE.

Last Friday, after HuffPost asked the WWE a second time if anyone there had known about @AmyMek before hiring Siino, the company responded definitively.

“No,” said the WWE spokesperson. “Now that it has come to our attention, Sal Siino is no longer an employee.”

O’Brien has been viciously harassing me, my husband and my loved ones for having an opinion different than his, and supporting @realdonaldtrump.

O’Brien went so far as to contact my husband’s employer and had him fired because of MY OPINIONS and my fight for Jews to exist.

Not only do I stand up for MY rights but also for women, LBGTQ, minorities, and persecuted Christians throughout the world.

O’Brien does not have to agree with my stance on Sharia, Jihadists, Muslim Brotherhood or HAMAS, but does that mean my husband shouldn’t be allowed to work? I am scared for all of my conservative friends who have voices that O’Brien and the @HuffPost disagree with.

Many have come to her aid, calling out O’Brien for his “doxxing” of a private citizen.

The left destroys human lives. The @HuffPost smears, defames, libels anyone who dissents. @AmyMek isnt a public figure. She’s a patriot who tweets and has amassed a huge following. So they will shut her up, destroy her and her family.
Communist China
Nazi Germany
Soviet Russia https://t.co/bWehkWx97p

Hamas-linked CAIR’s @ZahraBilloo endorses the doxxing of a private citizen exercising her First Amendment rights, endangering the lives and livelihood of this woman and her family. https://t.co/VWnZyHxKEw

Jack Posobiec and Mike Cernovich both tweeted their condemnation of HuffPo and support for Mek.

Very wrong what HuffPo has done to @AmyMek and her family. They are confusing journalism with hate campaigns

The Huffington Post has doxed a Jewish woman, @AmyMek, who has been receiving death threats.

Investigative journalist, Laura Loomer responded saying, “Why do conservatives just sit back and watch as liberals sabotage our people? When is the Right going to FIGHT BACK?!? You have to fight fire with fire. Wake up. This is #War.”

I love @therealroseanne too.

Why do conservatives just sit back and watch as liberals sabotage our people? When is the Right going to FIGHT BACK?!?

You have to fight fire with fire. Wake up. This is #War.