The Mall of America went all out Taliban on Iranian Pastor, Ramin Parsa, for sharing his testimony during a casual conversation with two Muslim women in August of 2018. Parsa, a refugee from Iran, is no stranger to facing persecution. Upon arriving in the United States, Parsa thought he would be free to practice his religion without fear. A trip to Minnesota’s Mall of America would test that freedom after he was approached by Somali women ten minutes after entering the mall. What happened next will shock and disturb all freedom loving Americans. 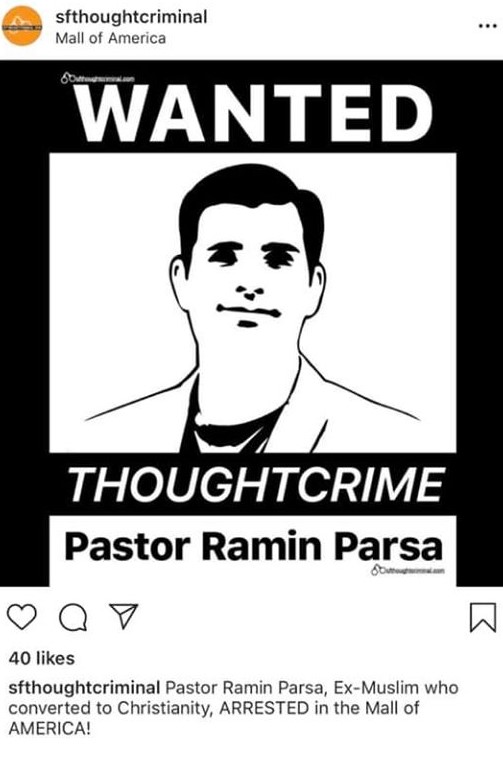 “I planned on visiting the Mall America as a tourist,” said Parsa in an exclusive interview with the Deplorable Housewives. Within ten minutes after entering the Mall of America, he was approached by two Somali women wearing  hijabs who asked him if he was a Muslim. Parsa told them he used to be a Muslim but had found Jesus. They asked him why he would do this and as he was sharing his testimony, a third Somali woman approached him and accused him of proselytizing. A security guard then told him he could not solicit at the mall. Parsa told the guards he was not soliciting and was only politely responding to the question he was asked. Parsa then parted ways with the women and went to a nearby coffee shop. Much to his surprise, three mall security guards were waiting for him outside the shop. Parsa and his friend, also a pastor, told the guards they were not soliciting just visiting as tourists.  Without another word, the security guards grabbed his cup of coffee and escorted him to the basement where both of his hands were cuffed to a metal chair for over four hours. He was not allowed water or any other basic dignity.

Parsa was transferred to the Hennepin County jail where he was released after posting bail. Parsa appeared in court with his attorney in December of 2018. “Dear brothers and sisters,” Parsa wrote, “the prosecutor did NOT dismiss the case at the pre-trial hearing. There is a settlement conference date set for March 7th 2019 and if they don’t settle the case by then, I will go to trial on April 29th, 2019. Please be praying for God’s will to be done, for wisdom, council and boldness. And Isn’t it amazing that while terrorists are killing people shopping for Christmas in France, Minnesota government is using its energy and resources to prosecute me for sharing the Gospel of Jesus Christ in a private conversation, at the request of the hearers? What is happening in Minnesota?”

During a prayer rally at the Minnesota State Capitol rotunda on Wednesday evening, Parsa recalled facing persecution in Muslim countries. “When I became a Christian, I was stabbed, I ran away from Iran. I went to Turkey for two years as a refugee. We had a church and we were passing out Bibles. I was arrested and accused of working with the CIA,”  Parsa recalled how Muslim men and women were beaten in Iran just for riding together in a car. “The left has always worked together with Islam to take over a country. I saw it in Iran and now I’m seeing it happen in America.”

The prayer rally for Parsa was held in preparation for his court hearing Thursday morning at the Hennepin County Courthouse. Parsa told the crowd how he had survived a plane crash in Mexico City on July 31, 2018. “Everyone on board survived. It was a miracle” he said. “I survived the plane crash, but not Minnesota,” he said with a hint of humor.

Please watch the exclusive video of the prayer rally in Minnesota below. Our interview with Pastor Parsa occurs at the 10:38 mark in the video. Speakers included Minnesota Rep. Eric Lucero (R-MN 30B) who spoke about the importance of his Christian faith.

Sources who attended the court hearing Thursday morning at the Hennepin County Courthouse have reported that the court ruled Pastor Parsa is not allowed to enter the Mall of America for a period of one year. There was no admission of guilt by Parsa. So far, there appears to be a news blackout regarding the outcome of the Thursday morning hearing and Parsa’s Twitter account has been suspended. Perhaps the Mall of America wants to keep this on the low down. After all, it would be a shame if Christians decided to shop elsewhere.

Hey @twitter, @TwitterSupport, why did you suspend @Ramin_Parsa? He’s been off Twitter since shortly after being charged with trespassing for sharing his story with interested Somali Muslim women at the Mall of America. Why are you making his persecution worse?

Parsa relayed a message to his followers on Facebook regarding the outcome of the hearing:

Parsa had a message for supporters; “Get involved and speak the truth in love.”