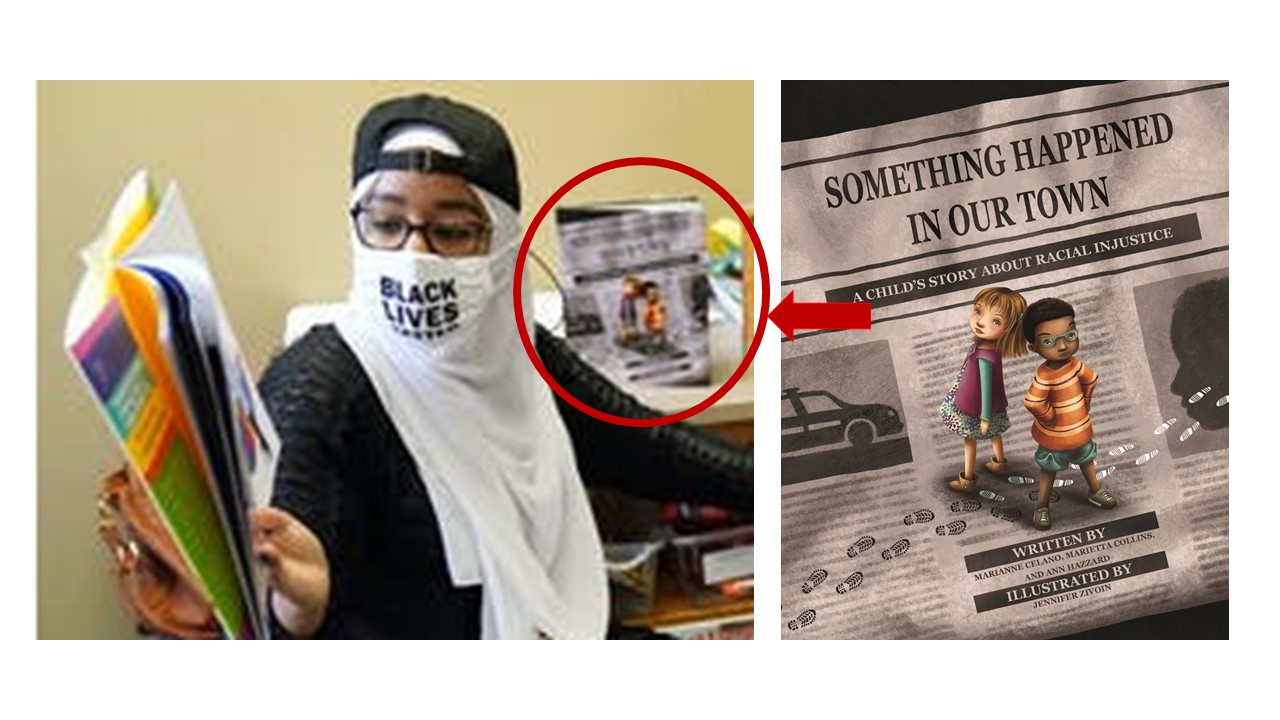 Is Minnesota’s “Teacher of the Year” teaching her students to hate the police?

Last month, The Deplorable Housewives of the Midwest published an article about Echo Park Elementary School teacher Qorsho Hassan, who won the “Minnesota Teacher of the Year” award this past August, photographed in her classroom by the Star Tribune making a political statement by wearing a Black Lives Matter mask while reading to the students in her 4th grade class. Echo Park Elementary School is located in Burnsville, Minnesota. Black Lives Matter was founded by admitted Marxists whose goals are to transform America completely. Not surprisingly, Black Lives Matter calls for abolishing all police and all prisons.

Upon further inspection of the photo of Hassan, a copy of the book “Something Happened in Our Town” can be seen on a bookshelf next to her. This book has created a firestorm of controversy, enough to prompt one of the largest police unions in Minnesota to write a letter of complaint to Governor Tim Walz, stating that the book demonizes police and characterizes them as racists.

In a letter to Minnesota Governor Tim Walz, The Minnesota Police and Peace Officers Association (MPPOA) states, “several departments in your administration are counseling teachers and parents to use materials which instill fear of police officers in young children”. The letter specifically names the book, “Something Happened in Our Town.” A video of the book was used in a class assignment on October 29 “in a 4th grade class at Echo Park Elementary in Burnsville, Minnesota.” The MPPOA letter does not name the teacher or the classroom where the book was assigned.  However, coincidentally, Hassan is a 4th grade teacher at Echo Park Elementary and there is photographic evidence, thanks to the Minneapolis Star Tribune, that this book – which encourages the hatred of police – is in her classroom.

Clearly this elementary school teacher has an agenda and she is not afraid to push it onto her students.

The MPPOA is the largest association representing public safety professionals in the State of Minnesota according to their website.

The letter to Governor Walz, written by Brian Peters, Executive Director of the MPPOA, states, “Language in this book leaves the impression unchecked that police officers routinely pull over, arrest, and kill black people without consequence. It says cops are “mean to black people” or “shot them because they were black” or police officers “stick up for each other” to help police officers get away with doing bad things. This book encourages children to fear police officers as unfair, violent, and racist.”

The demonization of police is a Marxist ploy that is front and center in the Black Lives Matter movement, and how coincidental is it that this book shows up in the classroom of a teacher who wears a Black Lives Matter mask in front of her young and impressionable fourth-grade students?

Politics and political agendas do not belong in a classroom – ever.

The anti-police narrative is ubiquitous in public schools. Minneapolis Public Schools terminated their contract earlier this year with the city’s police department to provide school security.

“Socialists, going back to Karl Marx, have always been irreconcilably hostile to the police because the police are the ‘chief instruments of state power,’ as Lenin put it,” said historian/author Nathaniel Flakin in an article recently published by The Church Militant.  Flakin is also the editor of the International Marxist movement Left Voice.

“Every successful revolution in history has involved working people standing up to the police and winning,” Flakin said in the article. “In every successful mass uprising, the police are forced to surrender and drop their weapons.”

Peters said in the MPPOA letter, “There are worthy discussions for our state to have surrounding race and equity in society and what children can do to be part of a more just world. We absolutely support making stronger community connections and bring people together. But divisive language that leaves children with the false impression police officers are out to hurt people based on the color of their skin is defamatory, wrong, and harms genuine public safety efforts.”

We couldn’t agree more. Anti-American and anti-law enforcement lesson plans and materials have no place in our public schools. Any teacher who pushes this agenda should be disciplined or terminated immediately.