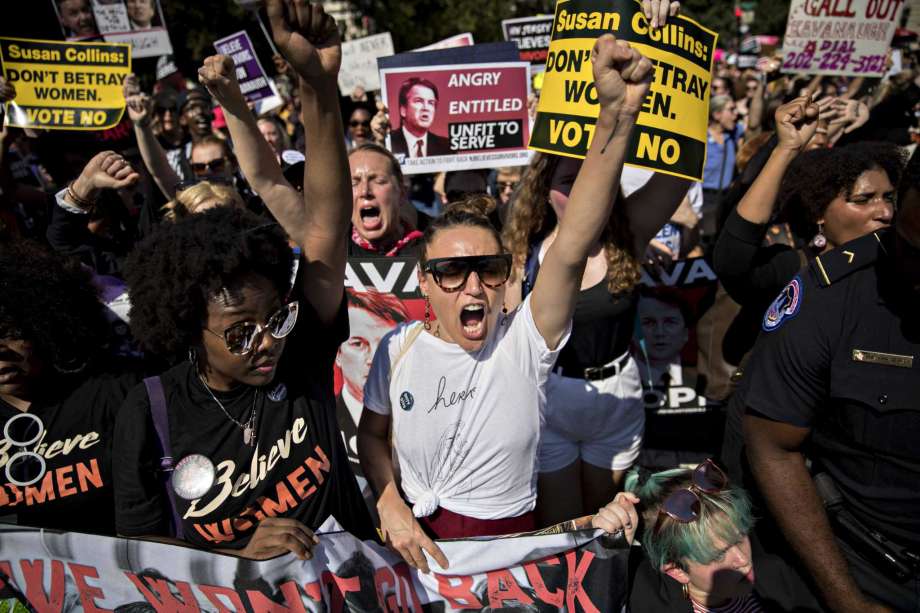 Which will America choose: Presumption of Innocence and the Rule of Law or Screaming Banshees and Perpetual Victims?

Over the past few weeks, America has been shown the difference between our two major political parties.  In a major miscalculation, Senator Diane Feinstein (D-CA) and her crew of angry Trump-hating Democrats played a political game and lost. The Democrats’ insistence upon an FBI investigation into unsubstantiated sexual assault allegations against Supreme Court Justice nominee Judge Brett Kavanaugh seemed to be an attempt to make President Trump and Kavanaugh to withdraw the nomination.  Trump called their bluff and ordered the investigation. Immediately, the Democrats began decrying the investigation as “not thorough” and “a cover-up” despite the fact that Kavanaugh has already been through six other previous FBI investigations. Their minions, hundreds of angry leftist women, converged upon the Capitol to screechingly harass politicians.  The FBI investigation came through with results that surprised few: there was no substantiation to the 30+ year old claims by Kavanaugh’s accusers. After all the drama, Kavanaugh was confirmed on Saturday, Oct. 6, 2018. Let the gnashing of teeth begin…

The democrat minions’ hysteria have reached a new level with the weekend’s events.  Senator Susan Collins (R-Maine), was a key vote for Kavanaugh.  In an historic speech made on the Senate floor Friday afternoon, Collins detailed the reasoning behind her decision to vote to confirm Kavanaugh.  This has made her a target of the Left’s angry banshees: Collins has received death threats and has been harassed on Capitol Hill for her decision.

“White Women, Come Get Your People: They will defend their privilege to the death,” is a New York Times opinion piece written by Alexis Grenell. In the piece, Grenell calls out “white women” for their support of Judge Kavanaugh.  In melodramatic language Grenell begins her op-ed:

After a confirmation process where women all but slit their wrists, letting their stories of sexual trauma run like rivers of blood through the Capitol, the Senate still voted to confirm Judge Brett M. Kavanaugh to the Supreme Court. With the exception of Senator Lisa Murkowski of Alaska, all the women in the Republican conference caved, including Senator Susan Collins of Maine, who held out until the bitter end.

Grenell believes that women who support Kavanaugh and Trump are “gender traitors.” (Note to Grenell: the actual definition of “Gender Traitor,” according to “The Handmaid’s Tale” is a homosexual.)

These women are gender traitors, to borrow a term from the dystopian TV series “The Handmaid’s Tale.” They’ve made standing by the patriarchy a full-time job. The women who support them show up at the Capitol wearing “Women for Kavanaugh” T-shirts, but also probably tell their daughters to put on less revealing clothes when they go out.

According to Grenell, white women “put their racial privilege ahead of their second-class gender status in 2016 by voting to uphold a system that values only their whiteness” because 53% of white female voters voted for President Trump.  Apparently, women who vote based on merit, policies and liberty, rather than gender or color, are the stupid, intolerant, racist ones, not those who look first to candidates’ skin color and gender in order to choose who gets their votes.

I have news for Grenell:  you and your screaming banshees do not speak for me.  The fact that you, like Hillary Clinton, believe that the only reasons white women would vote for Trump would be to “preserve the patriarchy” or because our husbands, sons, brothers, bosses, etc. told us to, shows exactly who you are.  You believe that running through the halls of Congress, menstrual blood flowing down your hairy legs, screaming at elected leaders, harassing their staff, posting death threats on social media, is acceptable, worthwhile behavior.  The angry women, behaving worse than a two-year-old having a temper tantrum in Walmart as their MO are wondering why independents and moderate Democrats are fleeing the Left via the #Walkaway movement in droves.

The disgusting behavior of the Hill protesters are moving the women’s movement back by decades.  The entire Blasey-Ford issue – turned into an “I believe her” movement by the left – is an assault upon the Rights of all Americans.  Due Process and Presumption of Innocence were shredded by an angry mob intent on destruction of Judge Kavanaugh and our American judicial system.  Listening to the banshees, one would believe we had traveled back in time to the Salem Witch Trials or moved into a Soviet-style system where the accused must prove his or her innocence, not the other way around.

Grenell claims that the women who scare her the most are “the mothers, sisters and wives of those young men, because my stupid uterus still holds out some insane hope of solidarity.” She also says that the issue of the midterm elections in November is “the blood pact between white men and women” who will do anything to “defend their privilege.”

We are in dangerous waters, America.  The unhinged left is losing the battle for dominance.  Their claims to believe in equality are shown as false as they attack “whiteness” as privilege.  Their behavior sets women back decades – what employer would look at those hysterical women and want to hire a woman?  If we now must “believe all accusers,” what does that do to work place policy: will companies institute a Vice President Mike Pence type policy that no two co-workers can be alone together?  What kind of a slippery slope are these incensed women attempting to take us down?

After the unsubstantiated allegations by Blasey Ford have been debunked by the FBI investigation, how much harder will it be for true victims to be believed? How much damage has been done to true sexual assault victims by the people using sexual assault claims as political weapons?

I am a mother of daughters and a son.  I am a sexual assault survivor. I have women close to me who also have survived sexual assault.  The key word is “survivor.”  One such survivor very close to me told me a few months after her assault, “I am not a ‘victim.’ To be a victim means he wins. To be a victim means I allow one horrible man to dictate my life and my future. I am stronger than that, and he will not win.”

The screaming banshees, women like Grenell and politicians like Senators Amy Klobuchar, Feinstein and others believe that all women are victims – victims of an oppressive society, victims of the patriarchy, victims of assault and harassment. They equate sexual harassment and groping incidents with rape – even a poorly chosen consensual one night stand can be considered “rape” if a women so chooses according to some on the left.  Without the perpetual professional “victims” the Left cannot prosper in their message of division and hate.

So, America, which do you choose – Presumption of Innocence and the Rule of Law or screaming banshees and perpetual victims?