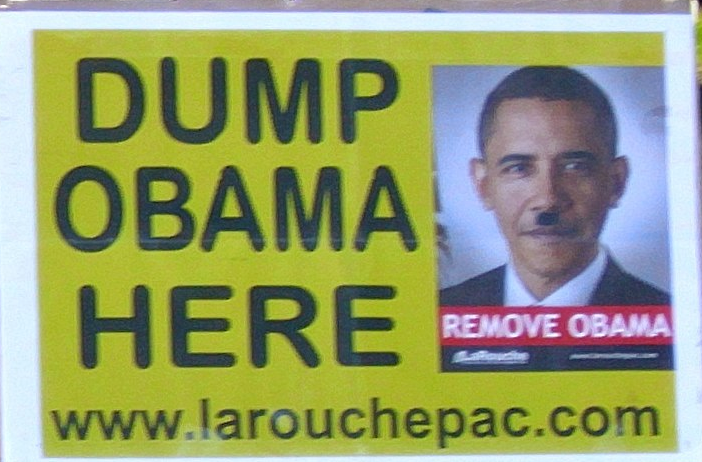 The LaRouche Cult has been around for decades. I remember the group of fanatics from my college days at Montana State. Students drawn to the fraudster were often seen seeking donations for distributing his literature. The literature stated the usual – the world is going to end….thermonuclear war…..the Rothschild’s. College is full of the gullible and the weak and his apocalyptic style encouraged them to act now before the world ends because of some cataclysmic event or undefined threat. Only the young can stave off WWIII.

Lyndon LaRouche is politically difficult to classify and is a mixed bag of nuts. He has a lot in common with Hillary Clinton and her rise through the ranks of the Left. According to The American Policy Center, “Lyndon LaRouche is a former member of the Trotskyite Communist Socialist Workers Party (SWP) and his first political organization, the National Caucus of Labor Committees (NCLC) , began as a faction of the Students for a Democratic Society (SDS), the same group that laid siege to college campuses in the 1960s. This is the same group that spawned domestic terrorists Bill Ayers and Bernadine Dohrn.  The NCLC became the U.S. Labor Party.”

During the 1960’s, LaRouche grew his movement known as, “The World’s Marxist Labor Movement.” throughout North America, Western Europe and South America. In 1980 he ran for President as a Democrat in the U.S. Labor Party Banner.

After his failed presidential run, LaRouche began reaching out to conservatives. LaRouche, a skilled con-artist, would use conservative buzzwords to find common ground and to infiltrate organizations:

Jane Fonda is a traitor

Expose the Council on Foreign  Relations

Hidden KGB spies in the government

By the time he was finished, LaRouche was seen as a conservative. Investigative journalist Cliff Kincaid wrote in 1981 in Human Events:

“The evidence is overwhelming, however, that LaRouche and his followers have not repudiated their Marxist beginnings. They push the Soviet line and, at the same time, smear some of the most effective conservative groups and individuals, who are exposing Soviet operations. Responsible conservatives should not snap at LaRouche’s bait.”

Unfortunately, many responsible conservatives succumbed to LaRouche’s rhetoric. His anti-government stance endeared him to the Tea Party and his followers began to infiltrate with the hope of destroying the movement from the inside. The famous Obama as Hitler sign began to appear at Tea Party rallies around the country. Rally attendees rallied around an anti-Obama sentiment and the photos and posters were a hit. LaRouche used the Tea Party’s energy to give him what he lacked – political legitimacy with the rallying cry of “Impeach Obama!”

Today, LaRouche is using his message to create growing paranoia among Trump supporters and the #MAGA movement. LaRouche, a creature who waffles to which ever way the political winds are blowing, seems like a Trump enthusiast on the surface. However, one of his fireside chats from 2016 indicates otherwise:

“Do you think he’s even human?” asks LaRouche in 2016. Fast forward to 2018 and note how his convictions have changed. The British hating LaRouche is now claiming he has exposed a British coup meant to take out the popular U.S. president. According to LaRouche’s website,

It was British Intelligence Services that meddled in our 2016 election. London’s MI6 Foreign Intelligence peddled British filth about Trump and Russia through Obama’s intelligence officials and the Clinton campaign, in order to disrupt the Trump campaign and Presidency.

America is increasingly facing some complicated issues – violent Antifa, North Korea, China, Russia, Mueller. The Trump movement is in its infancy and the forces and lies of Lyndon LaRouche are meant to cause confusion in the ranks. Take a look at his current conspiracies:

WWIII is eminent and must be stopped

Incitements are coming against Obama

The list goes on. If there is a conspiracy, LaRouche is your front-man and he’s trying his best to make Trump supporters seem intellectually weak, nutty and down right dangerous. Stop with the conspiracies and lets get back to trying to save our country.

Enjoy this video of LaRouche.