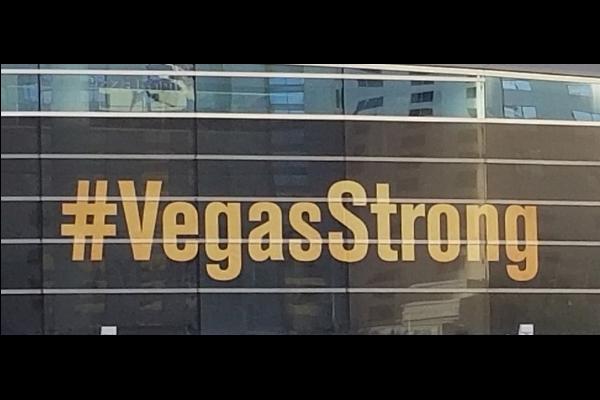 Since driving cross country to drop my son off to start his new adventure as a student at the University of Nevada – Las Vegas in 2016, I have adopted Las Vegas as my own.  To see the hell unleashed upon one of my favorite cities a year ago still hurts my heart.  Though the authorities have closed the case, questions remain about the actual events that evening – the supposed “lone wolf” gunman, his possible motives, potential accomplices and the hushing by authorities of anyone claiming to have a version of events that differ from the official one.

A year ago, around 2am Eastern time, my phone rang, “Mom, turn on the news,” my son said, “Vegas is under attack.” Wide awake, I sat straight up in bed, “What?” I asked.  My son, voice shaking, replied, “There is an attack on Vegas, go turn on the news.  It happened at the Route 91 Country Music Festival.” Now fully freaking out, I asked, “Where are you? Are you there? Are you at home? Are you ok?” My son, a student and hockey player for UNLV, said, “I am ok.  We had tickets to go, but I decided to stay home and do homework.  But a lot of my teammates are there and mom, Coach Nick was shot. I don’t know if he’s going to be ok, but just get to the tv, please.”  With a promise to call him back as soon as I could, we hung up.

A year later & still so many questions left unanswered re: Las Vegas shooting. Our exclusive footage / statement from plugged in former FBI task force member are more relevant now than ever. Plz find the truth @lauraloomer… the only journalist willing to risk it all. #LasVegas pic.twitter.com/aqTXXlV4dL

The next few hours were spent huddled on the couch, phone to my ear, TV on, watching the people running from the scene of the attack as my son, less than a mile away from Mandalay Bay, told me what he was being told by friends who had been to the concert and reports from other friends working in nearby hotels and casinos.  The reports included multiple shooters at casinos down the strip, terror as people ducked and ran from the flying bullets, many hotels and casinos on lockdown on the strip as police and EMS sped to the scene.  The carnage was horrific with nearly 60 people killed and hundreds others injured, my son’s hockey coach one of the critically wounded victims.

A year later questions about the attack remain unanswered. Investigative journalist, Laura Loomer, has been one of the few who have not let the worst mass shooting in US history become relegated to just a horrific memory.  Loomer has continued to dig for information on the people behind the shooting over the past year.  This week she is back in Las Vegas to continue the investigation that authorities claim is closed.

It has officially been 1 yr since the #LasVegasShooting on October 1, 2017 at the Route 91 Country Music festival.

58 people were killed and more than 800 others were injured. Despite being the deadliest shooting in U.S. history, we have no answers. pic.twitter.com/G2j5VKfE0C

The city is trying to heal.  Today many events are planned to honor the victims, the police and EMS workers who helped save so many people that night. The lights on the famous Las Vegas strip will go dark tonight in remembrance of the victims, and last spring, the new National Hockey League team, the Vegas Golden Knights, retired the number “58” to honor the victims.  Each Knights and UNLV Rebels hockey game begins with a moment honoring EMS workers, police, firefighters and military members as well.

Here is a list of events in Las Vegas that will be honoring victims of the #LasVegasShooting. https://t.co/HWegNdWsu5

My son’s hockey coach, Nick Robone, spent days in the hospital after being shot that night.  The bullet that hit him narrowly missed his vital organs as it ripped through his body, resulting in a wound that required 70 stitches and months to heal.  His brother, Anthony Robone, is a firefighter and happened to be with Robone that night. Without his brother’s help, Robone may have been one of the 58 killed that night.

The story of a life saved during Vegas shooting https://t.co/82CNkUoXKR

ESPN’s story on Nick Robone and the Vegas Community

In an interview with The Las Vegas Review Journal Robone talked about how the experience has affected him personally:

“It was an unfortunate event that happened, but it only made me stronger as a person mentally and made me aware how awesome this community is, how much I want to give back,” Robone said. “It’s unfortunate something like this had to occur to see the community come together, but at the same time, it was a beautiful thing.

“I don’t sweat small stuff. I know it’s a cliche, but you never know what can happen when you walk out those doors. I’m going to live life to the fullest and be a good human being, because when you’re gone, the only thing that matters is what you did for others and how you made people feel.”

He hasn’t read much about the shooter. Maybe a few stories. A graduate of Centennial High and UNLV who earned his master’s in athletic administration and sports marketing from Western Kentucky, Robone is 28 and doesn’t think it is worth his or anyone’s time to educate themselves about a person for whom no one will ever truly understand those motives that led to such an unforgettable moment in time.

Instead, amazingly, incredibly, perhaps incomprehensibly, he gives thanks.