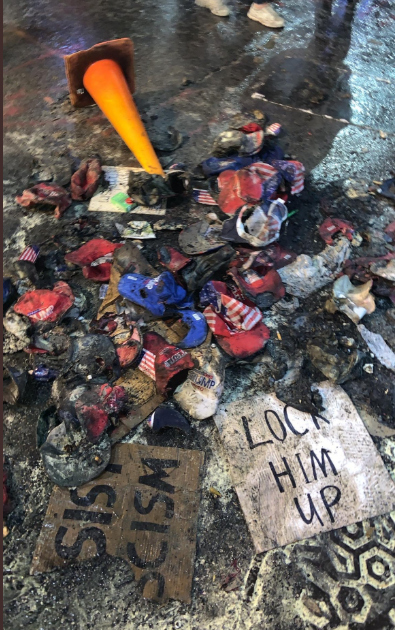 In a Facebook post titled “The City of Minneapolis Strikes at Trump Supporters,” Adam Patrick tells the tale of his harrowing experience while trying to get to the Trump Rally held at Target Center in downtown Minneapolis, Minnesota on October 10, 2019.

I arrived downtown and parked at the parking ramp that is attached to the Target Center by a skyway only to find the skyway closed. I exit the ramp and walk towards the Target Center looking for a way in. The city had North Second Street blocked off with dump trucks and barricades leaving only one path to the front of the Target Center. There were no signs for directions, and certainly nothing to indicate the city had deliberately built a trap for Trump supporters.

Patriotic protestors are chanting “Lock Him Up” outside of the #TrumpMinneapolis rally. #TheResistance is strong in Minneapolis! #ImpeachAndRemove pic.twitter.com/I42MuRRRhp

At this point I will cease to call them protesters. I’m not sure what they should be called. They were violent, they were rude, and they were intimidating as hell. They were obviously organized and possibly trained. There were no cops behind the barricades or visible anywhere else at this point.

The mob is screaming at me as I walked. Shoving cameras in my face and taking close up photos. I mean cell phones, professional cameras with large lenses, media style movie cameras. Everything. I attempted to film the mob on my phone but I got jostled and it didn’t work. But I held my phone out like I was filming which probably helped me.

People were in my face yelling at me. Telling me I should be ashamed, SHAME! SHAME! Calling me a loser, RACIST, NAZI, Trump is Hitler, etc etc etc. Honestly, I don’t remember everything that was yelled. But it was VERY bad. Indescribable really. As I walked, I was jostled and shoved by the mob.

Suddenly the Trump supporter in front of me was attacked by a couple thugs. I saw the Trump guy bend over to grab something and the crowd swarmed around us. The crowd was yelling DONT LET HIM PICK IT UP! DONT PICK IT UP! They had knocked his hat off and were trying to steal it. As he bent over people were punching him and shoving me. I reacted like it was a mosh pit and got close to him and braced myself (as if he would be trampled when he crouched down). Nobody punched me that I recall and I have no bruises. The Trump supporter got what he was after and somehow we made it out!

Trump flag being burned as Trump supporters chant nearby. This is getting a little crazy. #TrumpMinneapolis pic.twitter.com/rkcWXA3ACr

Looking back I now know they were after his hat. At the time I had no idea what was happening. Its difficult to explain. There was a lot of adrenaline, a lot of confusion, a lot of noise, screaming, people shoving me, it didn’t make any sense. There were no cops. Everyone who followed the path I went on had to go through the mob. The point of all this is, you didn’t know there was a mob till you were surrounded by them with no way out but through it. I firmly believe that this was planned and organized by the city of Minneapolis. Based on the Mayors recent actions and information from uniformed Minneapolis police officers told to me directly, I blame the Mayor of Minneapolis.

Now stop and look at this a different way. I work hard for a living and I have been around the block a couple times. I can take it. But still, the mob shook me up. What about the 50 year old house wife? What about the young people who might be more sheltered? What about the bookish office person? How many people left? How many never came?

We still filled that damn stadium. 30,000 people braved that mob and made it in. Many were smart enough to read the information and find the correct place to park and enter. Myself and many others did not have that info.

I’ve attached a map of the path I took to get to the political rally. The red line indicates my path. The black line indicates the police barricades. The Red star is where the conflict happened. Note the position of the first police I saw. Back from the protesters standing behind multiple fences. 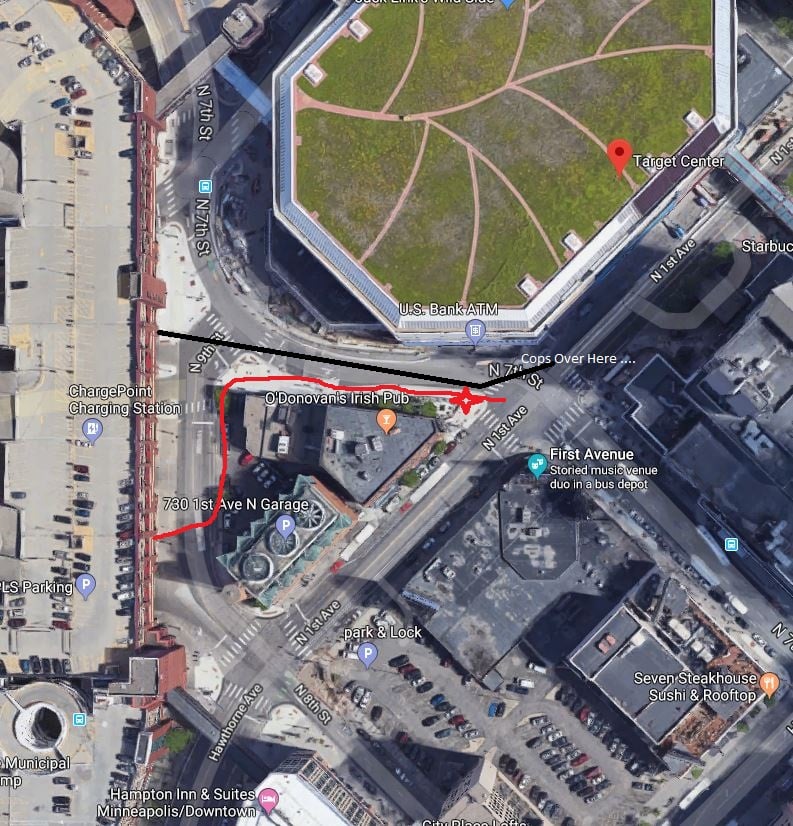 The path and direction of the police barricades is important, it formed a classic funnel leading to a military style ambush. Once you entered the narrow part of the “funnel” by the mob you could not turn around or retreat because of the Trump supporters pushing you from behind. You had to go forward through the violent mob. Its hard to explain, but there was no other option, and I did not realize that till it was too late.

Guess who blocked the stairway? Yep. All 30,000 attendees had to use 4 standard elevators unless they parked in the ramp. Shenanigans! Inside the skyway it was a slow-moving line and it was sweltering hot. Uncomfortable! Uniformed police told the line that the Mayor had cranked up the heat in the skyway and he was sorry there was nothing he could do about it.

Seriously. This was said to me directly by police. The Mayor turned on the heat to make the crowd uncomfortable.

Does anybody think I will ever EVER EVER! vote Democrat now? Will I ever be willing to listen to their side of things? NO!

Despite Minneapolis Mayor Frey’s work to tie the hands of the police and potentially endanger Trump rally attendees, supporters of President Trump still showed up in the tens of thousands and filled Target Center.

President @realDonaldTrump arrives at the Target Center in Minneapolis, Minnesota for a MASSIVE TRUMP RALLY. Speechless — this is absolutely EPIC!! #TrumpMinneapolis #KAG2020 pic.twitter.com/IGxcDjALpc

Getting thousands out of the Target Center after the rally was hampered by the violent protesters waiting for Trump rally attendees outside.  GOP Senatorial candidate, Jason Lewis, stopped on the way out to explain how the crowd was ushered out through one exit:

.@Jacob_Frey should be ashamed of himself for his belligerent rhetoric & anti law enforcement stances. Minneapolis is a national embarrassment tonight because of the fires in the streets & violence against police officers. I stand w/ our police and always will! #TrumpMinneapolis pic.twitter.com/TlNolARel0

Violent protests like what was seen outside the Minneapolis Trump Rally on Thursday night do not help democrats. Did President Donald Trump go to Minneapolis to expose that violence extends beyond the Antifa contingent of the Democrat party? If so, President Trump’s brilliant strategy was a “YUGE” success.