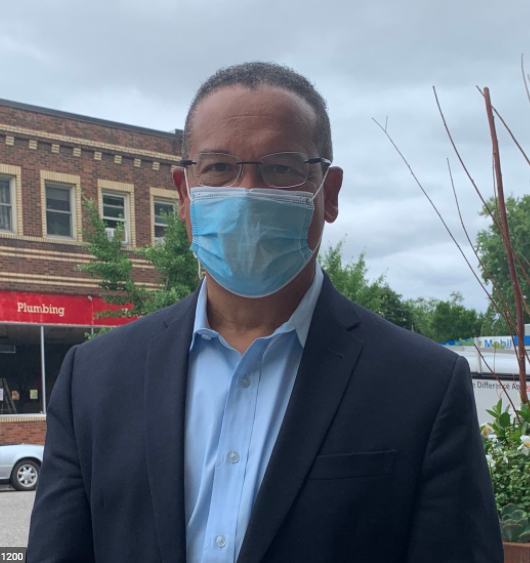 Minnesota Attorney General Keith Ellison, a leftist hack, is using his office to target citizens who don’t politically agree with him and is using COVID-19 as an excuse. His latest dastardly deed is to go after a local family owned farm in Northfield for hosting a private event with Eric Trump, son of the United States President Donald Trump on October 13.

Ellison’s office said it made a “routine inquiry” with Felton Farms in Northfield using the excuse of the COVID pandemic to harass the hosts of the Trump rally. Ellison’s office sent out a request to the owners of the farm for a written COVID-19 preparedness plan for the rally. With all the Democrat-driven destruction and nonsense that is going on in Minnesota, you would think a rally would be pretty low on the Attorney General’s to-do list.

But, no. This is Ellison’s opportunity to stick it to Trump supporters for gathering and supporting a <gasp!> republican presidential candidate.

“Event organizers planning large gatherings must outline the steps they are taking to mitigate the spread of COVID-19 under an executive order signed by Gov. Tim Walz,” Ellison told the Minneapolis Star Tribune.

Someone forgot to give Ellison the memo that executive orders are NOT laws, nor have they been passed by elected representatives of the people. In fact, Executive Orders should be challenged by every United States Citizen and held to a constitutional litmus test, because in the wrong hands, they threaten the very foundation of a free society.

“Attorney General Keith Ellison is once again using his office to play politics,” Minnesota Republican Party Chair Jennifer Carnahan said in an MNGOP press release. “It is not required for citizens to file paperwork with the state of MN for private gatherings.”

Carnahan also tweeted that Ellison didn’t ask for a “plan” from those who gathered to loot and violently protest throughout the streets of Minneapolis this past summer.

.@AGEllison used all the mechanisms of his office to threaten/intimidate the Felton’s today. Did he ask for a plan when people looted Mpls? The Felton family has a protected 1st Amendment Freedom of Association, and Ellison’s henchmen abused the power of his office. Period. https://t.co/nkzAFUzDov

This isn’t the first time that Ellison has abused his power to go after Minnesota citizens. In May 2020, he filed a lawsuit against Kris Schiffler, the owner of Shady’s Bar, after Schiffler announced plans to reopen his establishment in Albany, Minnesota during the COVID-19 shutdown.

A Go Fund Me Page for Shady’s Bar said, “As many of you know, all six Shady’s locations were planning on reopening on Monday, May 18th (against the Governor’s orders). We received a phone call from the Attorney General’s office yesterday, Friday, May 15th, informing us if we were to continue our plans to open and operate our six bars & restaurants, we could be faced with a $25,000 fine per location, per day with no maximum amount of times we could be issued the fine. We, along with countless other MN small businesses, have suffered long enough. Our customers, friends and family have been so supportive; the love shown to us over these past eight weeks with donations, gift cards and take out orders has been tremendous! We thank all of you for that from the bottom of our hearts. We love you all! With that being said, we unfortunately can’t survive on just take out orders. We need our business back just like so many others do. This isn’t a fight we should HAVE to fight, but it is a fight we are GOING to fight!”

Just to continue the misery, Minnesota Governor Tim Walz announced on October 7 that he would be extending the COVID-19 peacetime emergency into the second week of November, putting further burdens on citizens and businesses and allowing for more totalitarian edicts.

Ellison was elected Attorney General in 2018, despite two separate accusations by former girlfriends Karen Monahan and Amy Alexander, accusing him of domestic violence. During the election, despite the damning claims, the Democratic Farmer Labor (DFL) party continued to support Ellison’s bid for Minnesota attorney general. As you well know, all women who accuse men of sexual assault and domestic violence are to be believed — unless the accuser is a Democrat. Just like Tara Reide’s accusations of sexual assault against Democrat Presidential nominee Joe Biden, the story disappeared, never investigated and never was talked about ever again.

Ellison narrowly beat Republican challenger Doug Wardlow for Attorney General by only 98,948 votes. Wardlow won an astounding 73 of Minnesota’s 87 counties. Ellison won only 14 Minnesota counties, but these counties are where the majority of the state’s population lives, so therefore, we are stuck with Ellison as our Attorney General.

“The abuse of power and control from certain elected officials in Minnesota is infringing on the rights of our citizens,” Carnahan said in her press release about this week’s Trump rally.

Sadly, thanks to COVID-19, Democrats are using the virus as a reason to politically target Minnesota citizens under the guise of “saving lives.” Minnesotans need to wake up and vote in droves on Election Day to fight back against Democrats, who prey on citizens who want nothing more than to live their lives and open up their businesses without fear of retribution.