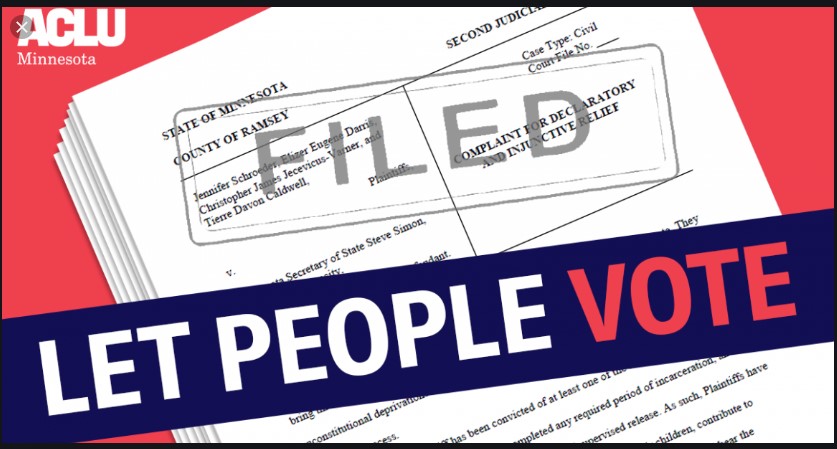 In October 2019, the ACLU filed a lawsuit against Minnesota in an attempt to overturn a state statute which denies felons the right to vote while on probation. What the ACLU conveniently left out is that the Minnesota Constitution does not provide for a private cause of action to sue the government as well as their blatant ignorance of Article VII, Section 1 of the Minnesota Constitution which clearly states that felons may not vote “unless restored to civil rights.“ According to a press release issued by the Minnesota Voters Alliance, the well established legal rules which are indisputable, “holds that the Minnesota Constitution does not provide private citizens the right to sue the government.  The ACLU claims it does have the right to sue, and Ellison and Simon have abandoned the case law and the longstanding, prevailing position of the State in these types of cases.”

In other words, Minnesota Secretary of State, Steve Simon, and the Minnesota Attorney General’s office, led by Keith Ellison, are not interested in their sworn duty and obligations of office to defend the State of Minnesota against the ACLU.  An article by The Hill proves that Simon has a soft spot in his heart when it comes to felons voting before civil rights are restored.  The Minnesota Secretary of State’s Office (SOS) stated Simon’s “support for changing the law to restore the right to vote to those who have left prison behind is well established.”

In their November 12, 2019 “answer” to the ACLU lawsuit, the MN SOS and the MN AG, agree that the ACLU is a private person and therefore has the right to sue the State of Minnesota.  This is in direct violation of the Minnesota Constitution which doesn’t allow for private citizens to sue the government.  Talk about bending over and kissing the proverbial behind of the ACLU!  I recall that both Simon and Ellison took an oath to protect and defend the Constitution, but I digress.

To prevent the ACLU, who are obviously in cahoots with Simon and Ellison, from furthering this unnecessary litigation, the Minnesota Voters Alliance has filed a Notice of Limited Intervention.  The Intervention provides the complete defense against the ACLU and should result in the dismissal of case, saving taxpayers a truck load of money.

According to the Intervention, “Minnesota Voters Alliance (MVA), as well as all taxpayers, have an interest in the Attorney General’s Office asserting “lack of private cause of action” defenses against every complaint against the State of Minnesota claiming Minnesota’s statutes violate the Minnesota Constitution; because if the Attorney General’s Office does assert this affirmative defense, the claims based on violations of the Minnesota Constitution will be dismissed.” 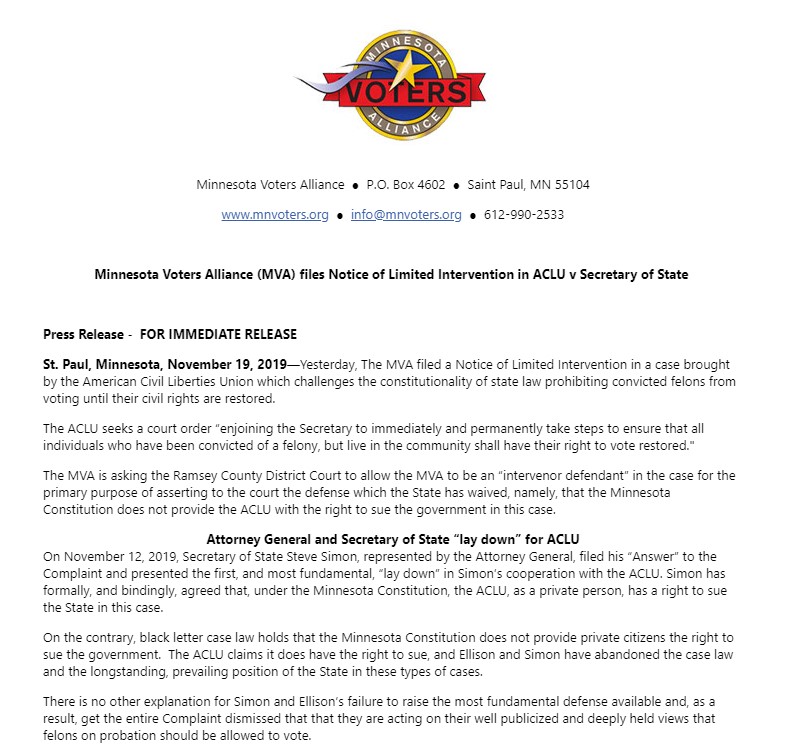 So what does Andy Cilek, Executive Director of Minnesota Voters Alliance, have to say about the obvious cooperation between the ACLU, the Minnesota SOS and the Minnesota Attorney General?  In his press release, Cilek states, “There is no other explanation for Simon and Ellison’s failure to raise the most fundamental defense available and, as a result, get the entire Complaint dismissed that that they are acting on their well publicized and deeply held views that felons on probation should be allowed to vote.”