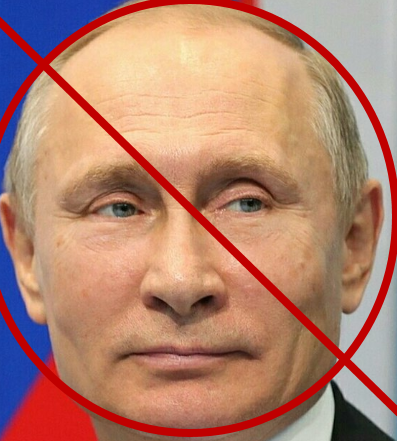 This decision by the court is a victory over the unlawful, determined, and longstanding refusal of the Secretary to allow citizens a look into how the state’s election system is being managed. The court’s analysis found no basis in the law for any of the arguments presented by the State. The State, therefore, is no longer able to hide the results of its actions in registering and permitting individuals to vote.

It is lamentable that citizen groups have had to pursue a long and expensive court battle to arrive at today’s ruling.

As part of the lawsuit, the MVA presented to the court a large body of specific data, from government sources including the Minnesota voting registration system, implicating the eligibility of tens of thousands of voters. The Secretary made no objection to the validity of any of those data.

We are now hopeful that since the law has been clarified for the Secretary, he will reverse his obstruction and work with public organizations like the MVA to actively analyze the growing body of evidence that the amount of ineligible may be significantly higher than he has led the public to believe.

The Minnesota Secretary of State must now release millions of records on “inactive” voters as well as the government-assigned voter statuses that identify voters who have failed an eligibility check. This data will be used to verify election results throughout the state of Minnesota. It will no longer be possible for the Minnesota SOS to casually claim that Minnesota election are the best in the country. The SOS will now be forced to prove it.

A recent report from the office of the legislative auditor found that more than 26,000 individuals whose status was marked “challenged” (because they failed one or more eligibility tests) voted in 2016.

Following the 2016 general election, Ramsey County mailed approximately 37,000 postcards to voters who registered during November and December. The purpose was to test the validity of each address by determining if the Post Office would return the postcard as “undeliverable.” More than 7,000 postal verification cards were returned, marked “undeliverable.” Thousands of those persons voted before the postcard test was conducted by Ramsey County.

That’s how this guy was elected.

Currently, citizens can purchase a “public information list,” which is a censored list of voters. This list is commonly used by candidates running for office but it is impossible to use as a means of election verification. This is because the list does not include inactive voters, voters who have failed address verification checks and those whose status is marked “challenged” such as felons.

To overcome the secretary’s refusal to release this information, the Minnesota Voters Alliance (MVA)  filed a lawsuit in Ramsey County District Court. MVA vs Secretary of State Steve Simon will force the secretary of state to comply with the Minnesota Government Data Practices Act by releasing the millions of records on “inactive” voters as well as the government-assigned voter statuses that identify voters who have failed an eligibility check.

Further action on this case occurred June 22, 2018 at the Ramsey County District Courthouse and the Deplorable Housewives of the Midwest were present in the packed courtroom to witness oral arguments.  Nathan Hartshorn with the Minnesota Attorney General’s office represented the Secretary of State and gave some surprising statements during his argument. Judge Frisch asked a simple question of the frazzled attorney:

“What’s on the master list?” asked Judge Frisch, “and what is the SOS doing with this data?”

Hartshorn’s surprising reply was, “It’s an abstract list. It exists in law but not in factual record. The list is an abstract thing.” he said “The law creates that category.”

“”How do I know challenged voters are on the master list?” asked the now perturbed judge.

“Public information lists is a matter of law and not fact.” said Hartshorn. “Certain data fields are available to the public under certain conditions. The portion of the data requested that pertains to this case is outside the public information list. The SOS may provide data under certain circumstances but administrative officials are given discretion as to what may be released.”

The now sweating Hartshorn seemed to argue himself into a corner. Hartshorn went on to say that releasing the data would violate the Constitution regarding the separation of powers. Therefore, the SOS, being an administrative official, has complete discretion on what can and cannot be released.

Judge Frisch then inquired, “You would agree that the SOS does not have complete discretion as to what is public.”

Hartshorn replied, “The statutes don’t require magic words. The plaintiffs data is at the discretion of the SOS.”

Hartshorn’t argument then referenced telemarketers and the Safe at Home Program which is a statewide address confidentiality program administered by the SOS in which people who fear for their safety can maintain a confidential address.

Judge Frisch asked if the plaintiffs were requesting confidential information to which Hartshorn said, “No.”

Erick Kaardal, representing the MVA, restored sanity to the courtroom stating that data is public unless an exception applies. Mr. Cilek from the MVA is not requesting any data from a voter who requires privacy, said Kaardal. Statements made by Kaardal are as follows:

Kaardal then presented this exhibit during the hearing: 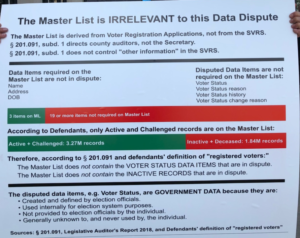 Kaardal said the disputed data items are government data and therefore, all data is public unless an exception applies. There is no discretionary data.

For the average citizen, what does this mean for Minnesota elections? According to an interview with Erick Kaardal by the Deplorable Housewives, if enough ineligible voters cast a ballot in an election, the election results could be thrown out and a new election would need to take place. This could get expensive for the State. A legislative fix for ineligible voting would be provisional ballots. Provisional Ballot Laws are laws that require a provisional ballot which are counted upon verification of the identity and eligibility  of the voter.

The complete press conference and a statement by Erick Kaardal can be found below: