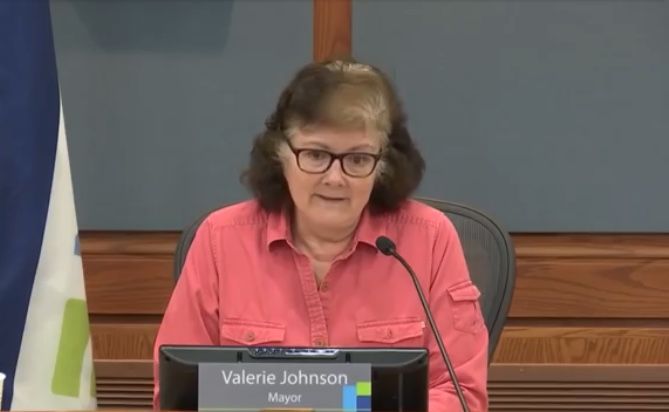 In response to the announcement that Catholic Churches in Minnesota will be opening up on May 26th, Valerie Johnson, the Mayor of New Brighton, appeared to be threatening those who go back to church with possible arrest in a video that was posted to YouTube.

Looking like the winner of a state fair pie-baking contest whose roots badly need a touch-up, Comrade Johnson warned in the video, “…I have asked you to follow the directives coming from the state. I am going to ask the same of you again and please do not put our beloved public safety department in the awkward and unpopular position of coming between enforcing the law and the needs of the faithful. Please don’t go to church and please continue to worship from home. Let’s wait for permission before going back to church.”

“Awkward and unpopular position of coming between enforcing the law and needs of the faithful”? Is she going to have church-goers arrested???

“Follow the directives coming from the state”? “Permission”? We now need government permission to go to church? Are you serious?

Johnson, who said in the above video “It is our job to enforce the law, whether we agree with the law or not” has disobeyed laws herself only last year. She pleaded guilty to one count of third-degree DWI in January 2019. She was pulled over by New Brighton Police and was discovered to be driving with a blood alcohol level more than twice the legal limit around 1:55AM on the morning of January 20, 2019. Johnson was also driving with expired tabs and was traveling at 54 MPH in a 40 MPH zone. According to the St. Paul Pioneer Press, Johnson exhibited bloodshot, watery eyes and was slurring her speech, which prompted police to administer a preliminary breath test or PBT.

Minnesota is full of these crazy progressive communists whose sole purpose for existing is to worship at the feet of the government and expect the rest of us to fall in line with their Soviet-style mindset.

Archbishop Bernard Hebda of the Archdiocese of Minneapolis and St. Paul bravely announced last week that Catholic churches in Minnesota will ignore the orders of Governor Tim Walz (D) and will resume public worship on May 26th at 33% capacity, to ensure the health of the public. A religious liberty advocacy law firm from Washington, D.C., Becket Law, sent a letter to Walz, supporting Hebda’s decision, which laid out a solid legal argument that Catholic and Lutheran parishes are protected by the first amendment, ensuring continued public worship.

The letter points out the hypocrisy and ridiculousness of Walz’s orders during the COVID-19 crisis, which allowed “non-critical” businesses like dog groomers and shopping malls to reopen on May 18th at 50% capacity; gambling casinos to reopen as early as May 26th; and some bars/restaurants allowed to open to limited capacity and other strict, onerous and ludicrous edicts around June 1st. However, the orders continued the indefinite ban on church worship services. Becket Law wrote “This unequal and unfair treatment violates the Churches’ cherished constitutional freedoms, and more importantly, hobbles unconscionably their pastoral mission.”

Keep in mind that COVID-19 has a 99% recovery rate and over 80% of Minnesotans who have contracted the virus and have succumbed to it were already quarantined in assisted living/long-term care facilities, according to Minnesota State Senator Scott Jensen, who is also a medical doctor.

The Becket Law Firm is named after Thomas à Becket (1118-1170 A.D.), or as he is also known, St. Thomas of Canterbury, who served as the Chancellor of England and oversaw the laws of the kingdom. As Archbishop of Canterbury, à Becket stood resolutely at the intersection of church and state, refusing to allow the King to interfere in the affairs of the Church. à Becket was eventually martyred by the King’s knights because he defended the principals of religious liberty.

This year is the 400th Anniversary of the landing of the Mayflower at Plymouth Rock, Massachusetts. The pilgrims came to America in search of Religious freedom. How ironic that during this important quatercentenary of the Pilgrims arrival in the New World, Americans are once again struggling for the freedom to worship against the edicts of an oppressive government.

If we are prevented once again from worshiping freely, and our elected officials who swore to uphold our United States Constitution refuse to let us worship, where can we go from here to once again enjoy this freedom?