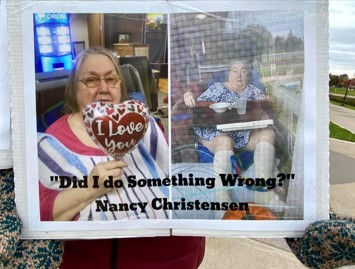 An article by Jason Cooper of The American Thinker, asks us the important timeless question about how we would react in a situation similar to Nazi Germany. If we could go back in time, would we standup for what’s right, or become as sheepish as the Germans in the late 1930’s?

We feel that in our heart of hearts, we would resist.  We would stop. We would turn on that authority and refuse to continue.  But is that true?  Maybe we humans are more like sheep than we care to think.  What does it take for abusive authority to turn us into evil and abusive sheep?

The past 8 months have taught us that the American people are willing to blindly follow the orders of “scientists” in white coats who have demanded cruelty beyond belief from all of us. We have become a nation of cruel and merciless sheep. Governors and agencies have demanded that we follow their dictates and the press have vilified all who refuse to follow the draconian mandates. Americans are now divided into two camps; masked vs. unmasked, and just like the Soviet style KGB, the masked people have become the enforcers of mandates.

A story in the Washington Post headlined “Pandemic isolation has killed thousands of Alzheimer’s patients while families watch from afar” provides a stark and disturbing example.  The story tells the tale of those suffering from irrecoverable dementia.  Since the pandemic broke, over 130,000 of these victims have died of their dementia.  They have died all alone.  They have essentially been put in glass-windowed cages where their relatives can view them, like some wild beasts.  But to enter the room and hug them or kiss them or even to just touch them is forbidden.  A wife may not kiss her husband.  A son or daughter may not hug their mother.  Its forbidden.  By whom?  Why?  Are we that worried a patient suffering severe and fatal dementia might catch COVID?  Touch is the one language still understood by someone with dementia on that scale.

To call attention to the particular cruel abuse of those locked inside Minnesota Long Term Care (LTC) facilities, we held a rally against cruelty on Sunday, October 18. The heartbreaking stories of families who were told that their loved one had to suffer and die alone, without a hand to hold has left them emotionally bruised and battered. There is no reason for any of this, yet it continues, unabated.

Meet Mariah Griep and her mother Michelle who lost their dear grandmother & mother, Della Beal. Mariah spoke with authority and passion while Michelle held photos of Della, so the crowd could visualize her suffering.

The story I’m about to tell you is about my gramma, Della Beal, who died this summer, not from COVID, but from the cruel and oppressive policies crafted by Governor Walz and executed by COVID policies of Jones-Harrison Nursing Home. I want Governor Walz held responsible for those policies that killed my grandmother and others like her.

Like all of us, Della thrived on relationships, doing crafts with friends and playing games at her nursing home. Della celebrated her 99th birthday on February 22, surrounded by family and friends. One month later, her world and the world of her family would be turned upside down by the cruel policies implemented by Governor Tim Walz.

And that’s when the world stopped for my gramma. She was isolated in her room, put in solitary confinement, allowed no contact with anyone other than the staff who must have looked like astronauts in their space gear. Tell me, how is a dementia patient supposed to understand that? She didn’t have a phone in her room, so she couldn’t even talk to the outside world. When my mom called to check on my gramma, she was told my gramma was fine and that her calls were not encouraged because so many were trying to check on their loved ones that it was overwhelming the staff.

The staff at the nursing home refused to allow window visits and zoom meetings with Della were difficult because she didn’t know how to look at the screen.

The Zoom meeting with my gramma on Mother’s Day was a punch in the gut. Her hair, normally permed and curled, hung in her eyes. She didn’t initiate any conversation. She simply answered when we spoke to her. This was heartbreaking. She needed to see us in person, not on a screen.

For those of you who think that outdoor visits brought joy and comfort to those incarcerated inside nursing homes, think again. Dementia patients are easily confused, most are hard of hearing and can’t see well enough to know the masked visitor, standing the mandated 6 feet away, is a treasured loved one.

My gramma couldn’t recognize them because she was six feet behind a fence and plexiglass jail with a mask fogging up her glasses. My mom and brother were commanded to stand back another six feet on their side of the fence. Even shouting, we don’t know if she heard. And with masks, could she even tell who they were?

Six days after their only in-person visit, the nursing home called saying Della had stopped swallowing. Della would be allowed one 30 minute visit with 2 family members. The family had to decide who would get to say goodbye.

When my mom did go see her for those thirty minutes, she found my gramma still wearing those same clothes from six days earlier, with food stains crusty on the fabric. If they hadn’t changed her clothes, how else was she neglected during those four months. We will never know because she was locked inside.

The family pushed to get Della discharged at 3:00 PM so she could die surrounded by family. They felt relief because they would be able to give comfort and whisper their final “I love you” in her ear.  Then the nursing home called with horrifying news.

At 2:45 PM, that same day, my gramma was discovered deceased at the nursing home. Her last documented vital signs were at 1:30 PM. That was the last time anyone had seen her alive. For an hour and fifteen minutes they didn’t check on an actively dying patient. No one was with my gramma when she drew her last breath. She was utterly and completely alone.

The stories of abuse continued during the rally. A woman in the crowd gave me a sheet of paper from Ramsey County.  Not only are loved ones kept out, so are health care professionals. That’s right, even the physicians of patients inside nursing homes are kept away.

As mentioned in previous letters, no one enters the resident’s home without being tested. All staff are being tested weekly – Testing Tuesday. If a staff member misses a test, they are called off work, until a negative test can be obtained. No vendor is allowed in the building, including Health Care professionals, unless they have been tested by us or can show a negative test within the last week.

Katie Novotny lost her father this summer during the COVID lockdown. The nursing home had discontinued window visits. Their only contact was via phone. After enlisting the help of an ombudsman from the state of Minnesota, she was able to gain entry to his assisted living apartment.

What I saw upon walking into the apartment was appalling! There were clothes with dried feces on them in the shower, feces on his bed, a broken toilet seat and the heat was on at 85 degrees and it was 100 outside. His belly was distended, his foot was black and blue from a fall. He couldn’t stand without assistance. This strong man who would dance down the halls with me on our way out to go for drives just 3 month prior could no longer stand on his own.

Katie’s dad began to fail so they allowed her 15 minutes for compassionate visits one day per week. Katie had to drive for over an hour to see him for 15 minutes. Her family decided to pull him out and care for him at home. Her father, USAF First Sergeant Mike Petyo, Sr. was among the fortunate few to have died at home, surrounded by family.

Tomas Settell, Republican Senate candidate in SD52, gave heartbreaking testimony on the death of his father. His dad died of dehydration and failure to thrive during the lockdown. Is this a Constitutional Republic? Is this freedom? Will anything happen to Governor Walz for killing his father with these cruel policies? His dad served in the military and was a pastor. He deserved life not an undignified death is a Walz death camp.

Twila Brase, President of Citizens Council for Health Freedom, spoke about the unreliability of PCR testing, which can be inaccurate 90% of the time.  PCR involves an extraction process and an amplification process. During amplification, a DNA copy of a small segment of viral RNA is replicated multiple times. When labs set the parameters for replications or cycles at 40, the test is picking up inactive viral fragments from months ago. In an effort to increase case numbers, the Minnesota Department of Health requested physicians to list COVID-19 as the cause of death on death certificates throughout the state. To lockdown the economy, LTC facilities & hospitals over an inaccurate “case” number is criminal. The models are wrong, the tests are wrong, the media amplifies the hype and the public continues to panic.

So what is to be done to solve these deadly policies? According to Senator Karin Housley (R-SD39) and Chair of the committee on Family Care & Aging, the fault lies squarely on the poor leadership of Governor Tim Walz. Because of the Walz edicts, the committee on Family Care & Aging are not meeting and no meetings are scheduled. The families of those locked inside LTC facilities have no recourse, no ability to provide testimony to legislators. The legislative and democratic process in Minnesota is completely broken and until Walz decides to rescind his executive orders, there is nothing the legislature can do to stop him.

We would like to thank Senator Karin Housley, Rep. Jeremy Munson (R-23B) and Rep. Eric Lucero (R-30B) for speaking up on behalf of our most vulnerable and their heartbroken families. Rep. Munson stated that it is unlikely that Walz’s Executive Orders can be rescinded as the statute is poorly written and gives the governor the authority to sign another Executive Order immediately after the legislature votes to remove them. The clock would then begin ticking all over again and the legislature would have to meet again 30 days later to take another vote. This vicious cycle could continue until 2022 when a new governor is elected.

Rep. Munson provided a stark realization.  The legislature is considering changes to Minnesota law regarding solidary confinement in prisons because of it’s detrimental psychological effect on the incarcerated.  Yet, Gov. Walz, and unelected bureaucrats of this state see no contradiction in forcing the very same solitary isolation on our vulnerable family members in long term care facilities that they consider cruel and draconian for convicted felons.

In his article, Jason Cooper states, “The evil sheep are among us.  But it is never too late.  We can still wake up from our “woke” state.  The power is ours — each person standing up on his own and refusing to further take part.”

Stand your ground, friends.  Be kind.  Don’t let the white coats or the autocratic bureaucrats stop you!

The following photos were taken by Mill City Citizen Media during the rally.  The event was live streamed and we invite you to hear for yourself the pain and anguish these families have endured as they watched their precious loved ones succumb to the ravages of isolation and neglect.  The link is at the bottom of the page. 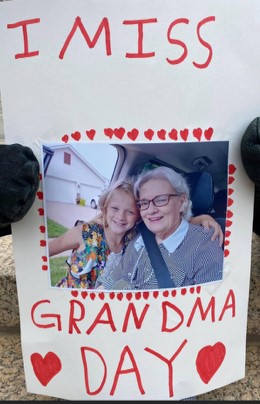 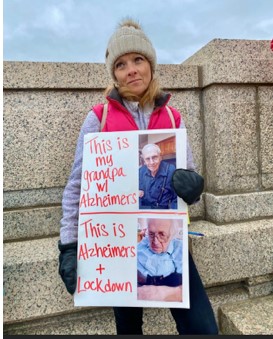 Please watch the entire rally against cruelty below: