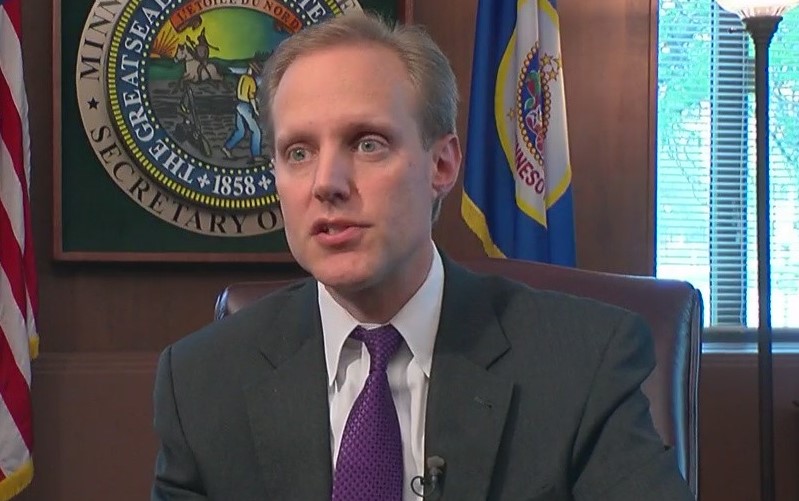 On Super Tuesday, the website for the Minnesota Secretary of State directed voters looking for their presidential primary polling locations to a website that supported Democratic presidential candidate Elizabeth Warren among other left-leaning, progressive candidates.

So the @MNSecofState website is redirecting people looking for their polling place to https://t.co/oVaUN78Owt (“trusted external site”) — an organization that has endorsed Elizabeth Warren. #mnleg #mnvotes pic.twitter.com/EMmkX1vn44

“Anyone who knows me knows that I place the highest possible value on the nonpartisanship of this office, and I deeply regret this error,” Simon said. “Every Minnesota voter deserves a voting experience free of partisan influence and I am committed to providing exactly that.”

Voters who logged onto the Secretary of State website to locate their precinct found that they had to give personal information to the boldprogressives website link before they could obtain information on their polling locations.

The Minnesota Secretary of State office, under Simon’s leadership has not been forthcoming with information in the past and has long been suspected of shenanigans. In 2017, the Minnesota Voter’s Alliance (MVA) filed a case against Simon for refusing to provide the public with full voting information on every voter, as the law requires. Minnesota has not been able to assess the accurate amount of ineligible voting that has been plaguing its elections. By providing this information, the public can effectively gauge the Secretary of State office’s performance with voter integrity.  In 2018, Simon was ordered by Ramsey County Court Judge Jennifer Frisch to comply with the Minnesota Data Practices Act and provide the millions of voter registration records that he refused to make public. Simon appealed the ruling late last year to the Minnesota Supreme Court.

Minnesota is not exactly famous for its voter integrity. Disgraced former Democrat Senator Al Franken famously “beat” incumbent Republican Senator Norm Coleman by a mere 312 votes in 2008. Franken’s victory was attributed to voter fraud. According to Minnesota Majority, a conservative watchdog group, at least 341 convicted felons voted illegally in Hennepin County with another 52 in Ramsey County. The number of felons voting in those two counties exceeded Franken’s victory margin. Other stories claim that ballots in Franken’s favor were located in the car of Minneapolis’ director of elections.

In 2014, former Democratic Representative Phyllis Kahn received information that hundreds of people in her district were registering to vote using addresses that were fraudulent. According to a complaint filed by Brian Rice, attorney for Phyllis Kahn Volunteer Committee, more than 140 people used 419 Cedar Avenue South in Minneapolis as their home address when they registered to vote. At the time the complaint was filed, 419 Cedar Avenue South was the home of Cedar Mailbox Center, which is now out of business.