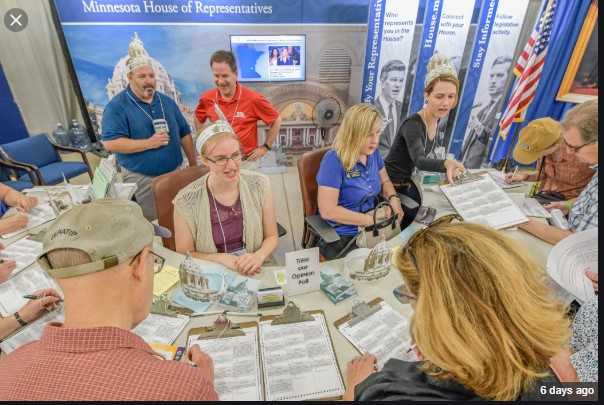 The Minnesota State Fair legislative poll results are in and while they aren’t performed by random sample, it gives us a pretty good idea as to what legislators are thinking for the 2020 legislative session. The poll questions were both leading and misleading. Like the bull being led by a ring in its nose, those participating in the polls were being led via obtuse, confusing questions meant to lead fair-goers by the nose to illicit the response necessary to prove Minnesotans want more gun control and a gas tax.

Here are a few highlights from the 2019 Minnesota State Fair poll:

1.  A majority believe that all children should be immunized by force (this question has been on the polls before with the same result – a majority in favor.)

2.  A majority wants total legalization of marijuana. The question was phrased with the caveat that the required age would be 21. Currently, Governor Walz is actively campaigning to pass legalized recreational marijuana in Minnesota. Maybe he wants us too high to remember all the daycare fraud.

4.  85% believe that law enforcement should take away guns from anyone who “is a danger to himself or others” as long as “due process is ensured.” Red flag laws will definitely be back in 2020!

5.  A 75% majority think that ‘conversion therapy’ should not even be allowed to be practiced in the state, and 60% think there should be no restrictions of any kind on abortion.

6.  A majority believe that taxpayers and employers, via added taxation, should fund 12 weeks of “sick time and maternity leave” for all people who have a job. This means that those employed in low skilled jobs can kiss their jobs goodbye.

7.  A 60% majority want felons to be able to vote immediately after release from prison, contrary to the present state law which requires the sentence be completed in its entirety before voting rights are restored. Five years ago this question was asked and the result was closer to a split opinion on the matter – now it has gone to the 60% + level in favor. The Minnesota State Constitution allows for felons to vote after they have completed their entire sentence. Walz will most likely sign an executive order in 2020, giving felons the right to vote prior to restoration of civil rights, assuring a big win for Democrats in 2020.

8.  50% were in favor of issuing drivers licenses or Photo ID cards to illegal aliens.  A surprising 7% had no opinion on this.

9.  For some reason, cursive handwriting is a topic. Should it be required in the school curriculum?  55% said yes, but a surprising 28% think that being able to write is not important at all.

9. An increase in the gasoline tax is always a simply-put question on these polls, with no information about the ramifications. People assume the gas tax will be spent as promised. Only 30% were firmly against an increase in the tax.  The remainder were split over whether the increase was acceptable at 5 cents, or more than 5 cents.

10.  Inconsistent with their opinions on other issues, 50% favor more nuclear power plants! And 47% were against sports betting!

11.  Two-thirds said they would like to have ANOTHER sales tax, a quarter of a percent, as ANOTHER “Transit Tax” to fund that vague category, “transit”. The question limited the scope of the tax to the 7 county metro.

12.  To solve the overcrowding of prisons, 76% think we should let prisoners out early to make room for new prisoners.  Only 17% were in favor of new construction of prisons.

13.  A 56% majority said that an appointed body, that would not include any legislators, should re-draw the district boundaries. Only 14% believe that the state constitution which gives this duty to the legislature should be retained. Apparently respondents didn’t consider that the state constitution would have to be changed in order to effect their wishes. This bill failed in 2019 but will definitely make a comeback in 2020.

Take a look for yourselves and remember that this poll is an indicator of what will be shoved down your throat in the 2020 election. 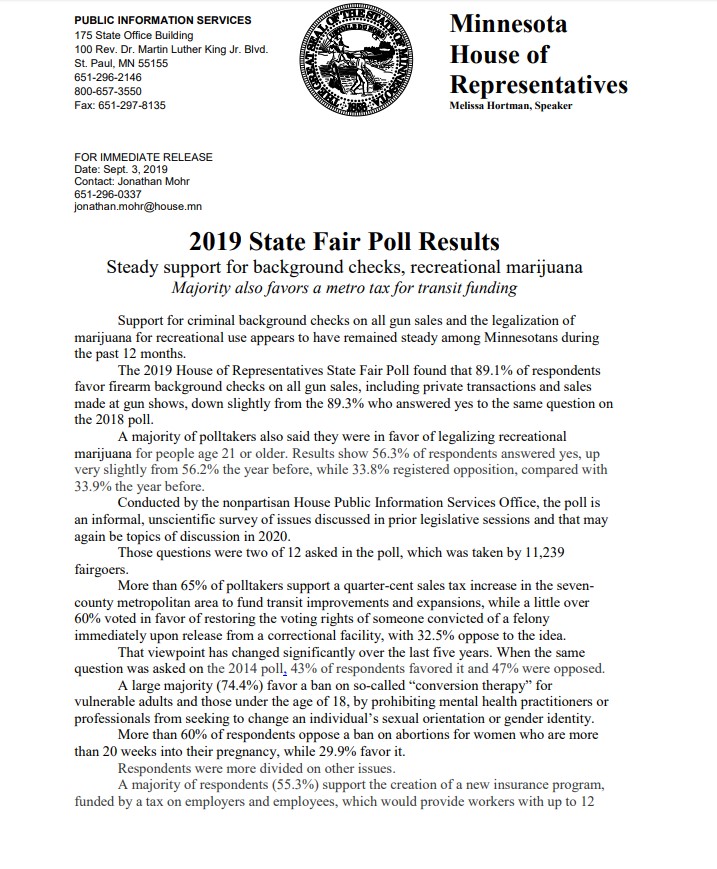 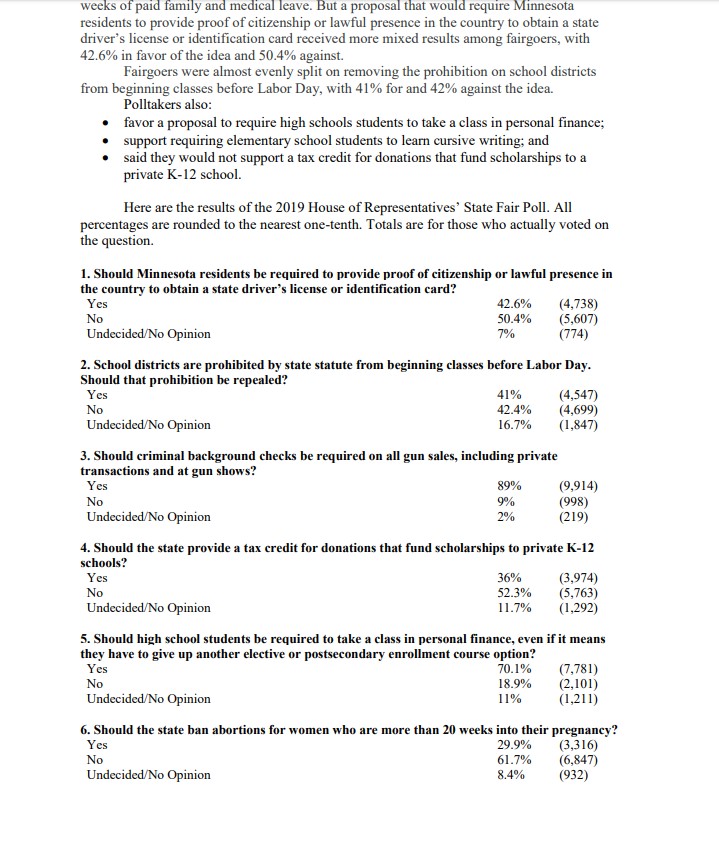 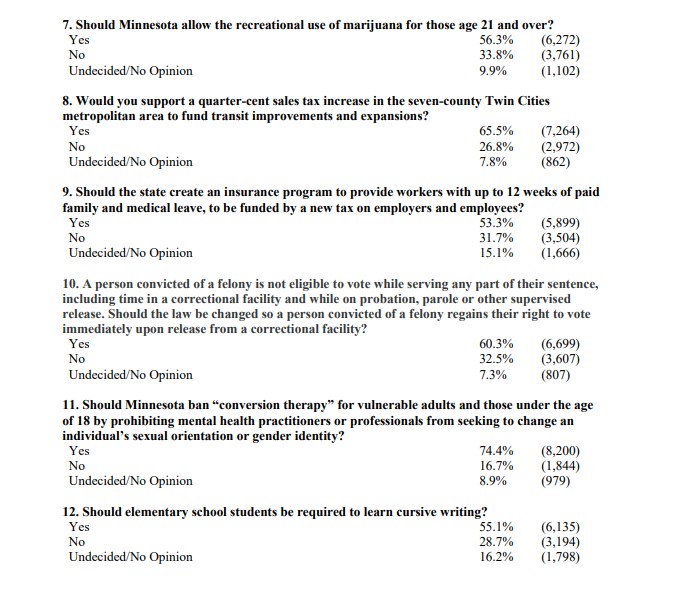 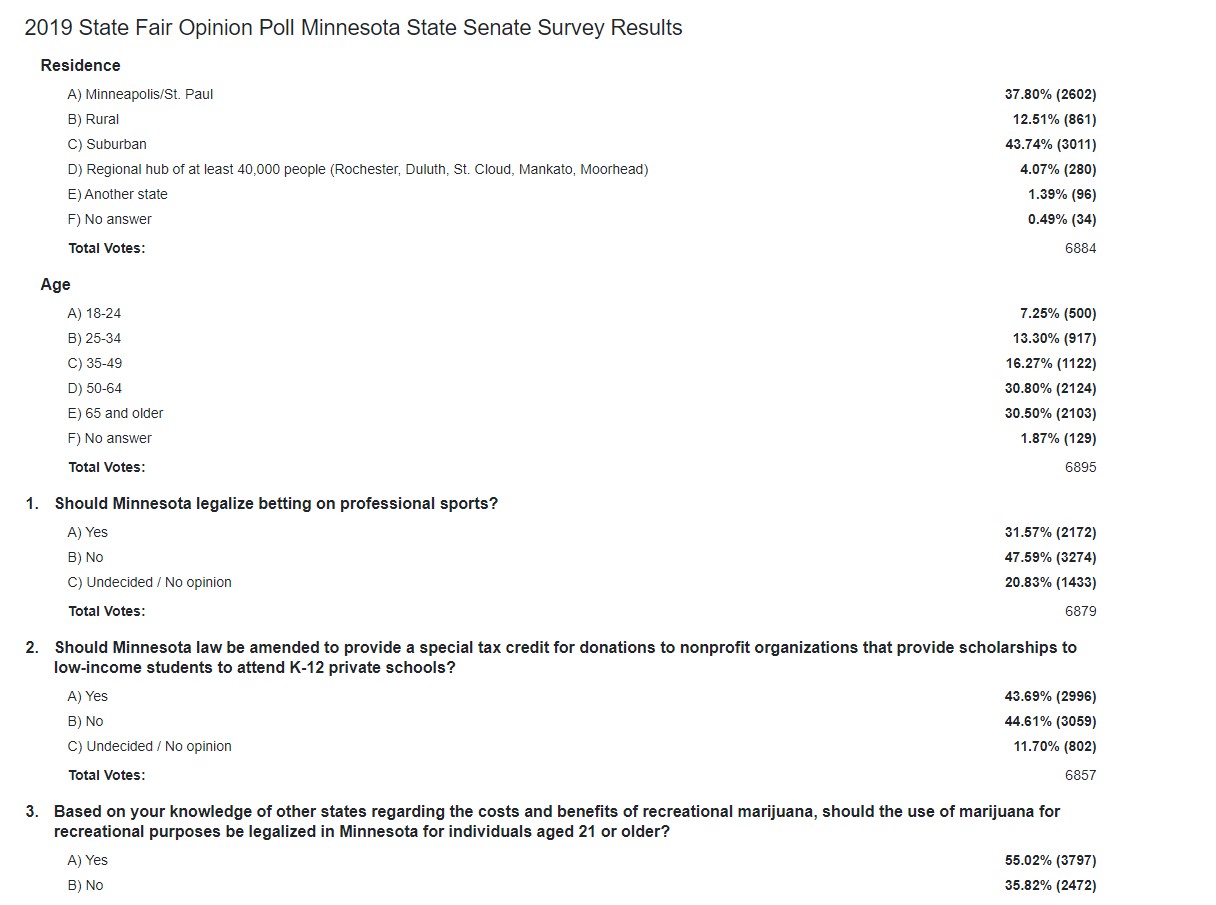 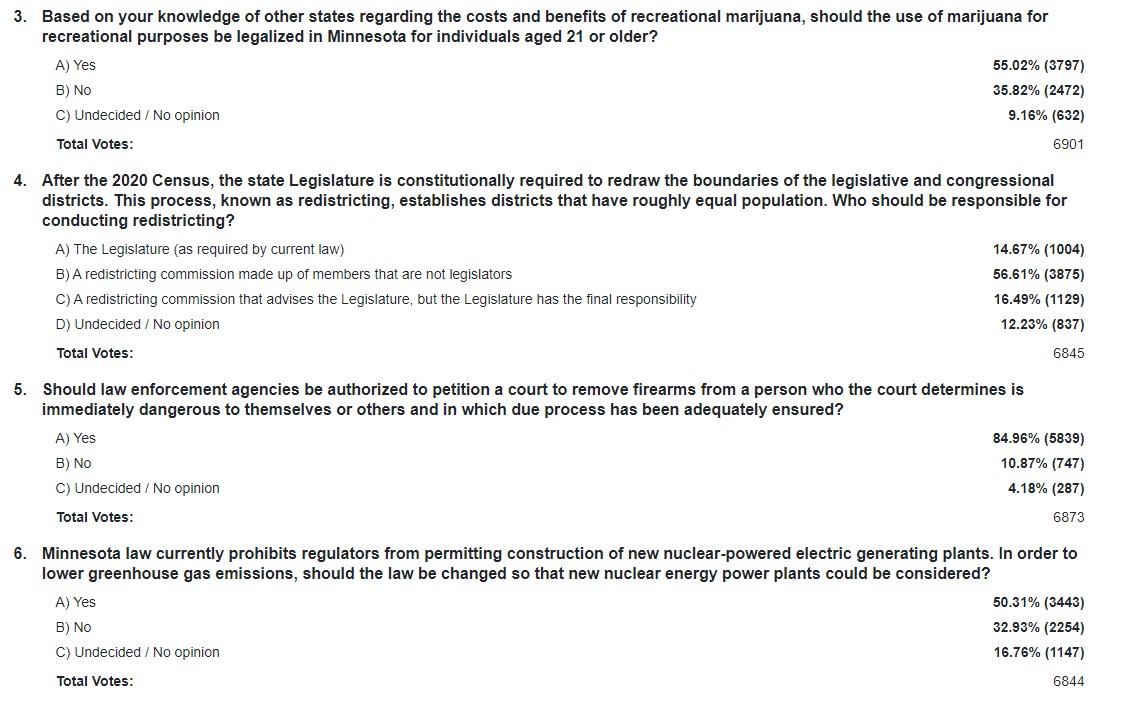 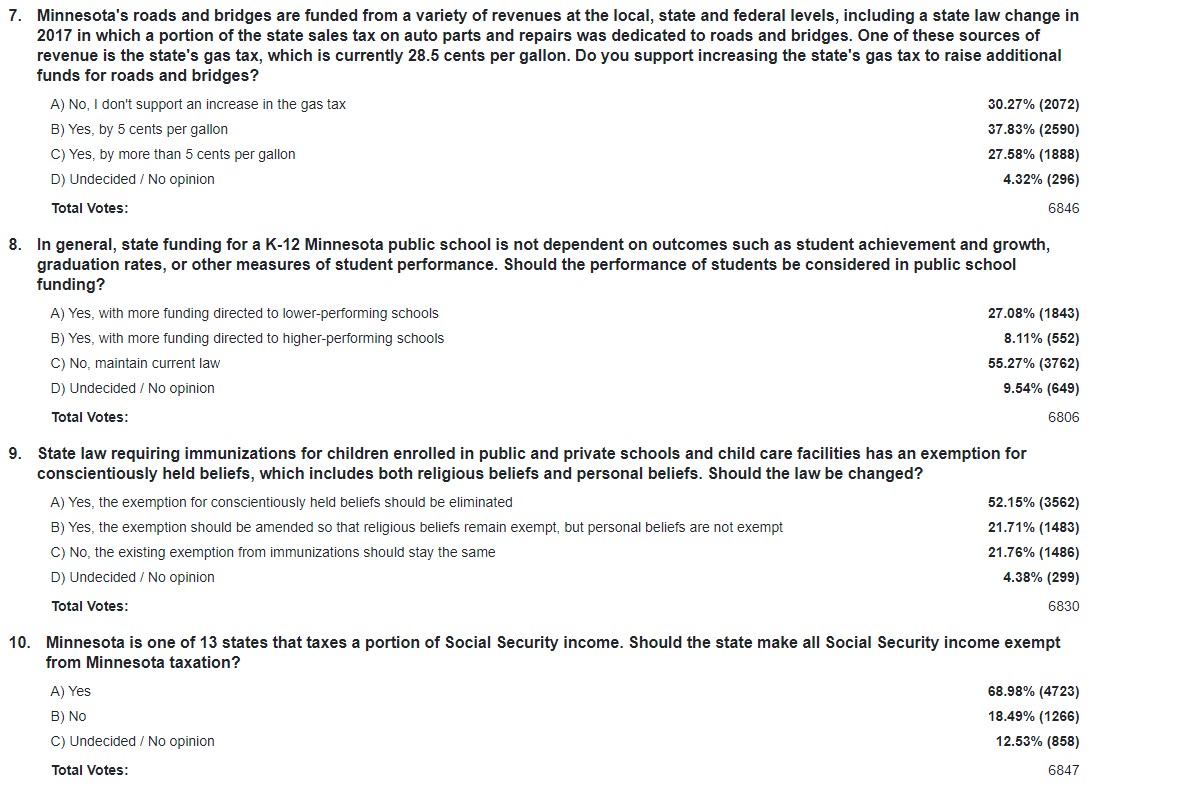