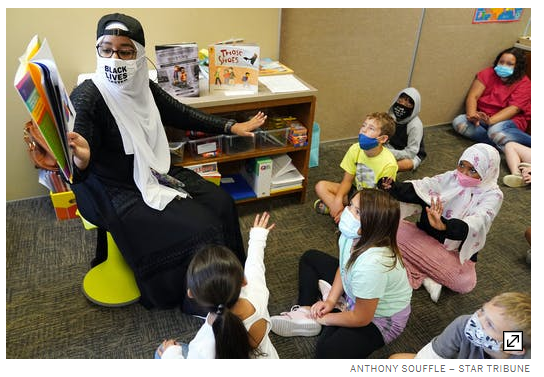 Imagine the outrage if any public school teacher wore a “Make America Great Again” face mask in her classroom? Or a “Trump 2020” face mask?

Recently, the Minneapolis Star Tribune reported that administrators in Lakeville, Minnesota in District 194 have directed teachers not to display Black Lives Matter signs in their classrooms, citing a district policy that bans school employees from demonstrating opinions on political issues at work.

According to the report, administrators in Lakeville responded to teachers’ requests to allow signs promoting the Black Lives Matter movement, which teachers said was meant to start and encourage a classroom discussion on current events and social issues. District leaders sent out a memo to educators stating that while some may view Black Lives Matter as a broad social statement, the Lakeville school district also sees it as a political message that is linked to the highly charged political issue of “defunding the police”. The memo said that because of this, Black Lives Matter does not meet the district’s stated goal of maintaining political neutrality and therefore will not be allowed in the classrooms.

After Hassan’s picture was published in the Star Tribune, a “call to action” on social media was initiated by parents who felt that Hassan’s choice of a face mask was inappropriate to wear inside the classroom.

“We are asking MN parents to write or call and express outrage that she (Hassan) is wearing a BLM mask in school,” the post read. The post continued, “BLM supports violent actions in our streets and are anti-police and anti-American. Imagine if any of these children have a parent who is a police officer?”

Hundreds of parents reacted to the post. “Get our children out of public indoctrination centers also known as public school. If you value their mental health, take care of them. It’s your job as parents,” responded one parent.

Another wrote, “If you are a teacher and your students know your political views, then you have FAILED as a teacher.”

We reached out to to Mary Kreger, Superintendent of School District 196 for a comment on Hassan’s face mask. At this time, we have not heard back from Superintendent Kreger.

Black Lives Matter was founded by Patrisse Cullors, Alicia Garza and Opal Tometi in 2013 during the highly controversial Trayvon Martin case. Patrisse Cullors has admitted in a video that she and her fellow organizers are “trained Marxists”.  Cullors was also the protégé of Eric Mann, who is a former member of the domestic terrorist organization Weather Underground. The Weather Underground famously bombed  the New York City Police Department headquarters in 1970, the United States Capitol building in 1971, and the Pentagon in 1972. Mann served time in prison after being charged with assault and battery, disturbing the peace, damaging property, defacing a building and disturbing a public assembly.

In an article by the Heritage Foundation, The Agenda of Black Lives Matter is Far Different Than The Slogan, published in July 2020, BLM co-founder Opal Tometti was reported “hobnobbing” with Venezuela’s Marxist dictator, Nicolas Maduro. Tometi wrote about Maduro’s regime: “In these last 17 years, we have witnessed the Bolivarian Revolution champion participatory democracy and construct a fair, transparent election system recognized as among the best in the world.” The Heritage Foundation said, “Millions of Venezuelans suffering under Maduro’s murderous misrule presumably couldn’t be reached for comment.”

The Black Lives Matter website states that its main goal is to transform America. Besides defunding the police, BLM’s list of demands included: abolishing all prisons; restructuring tax codes at the local, state and federal levels to ensure a radical and sustainable redistribution of wealth; and implement retroactive decriminalization, immediate release and record ­expungement of all drug-related offenses and prostitution and reparations for the devastating impact of the ‘war on drugs’ and criminalization of prostitution. Recently, a controversial page on the Black Lives Matter website was scrubbed that called for the disruption of “Western-prescribed nuclear family structure.”

Despite BLM scrubbing its controversial website page, Heritage Foundation stated, “the group’s radical Marxist agenda would supplant the basic building block of society—the family—with the state and destroy the economic system that has lifted more people from poverty than any other. Black lives, and all lives, would be harmed.”

To think, this is what Minnesota’s Teacher of the Year is promoting in her classroom on your tax dollar.