The local movement to free the British anti-sharia journalist, Tommy Robinson has now gone global. Yesterday, the very vocal pro-Tommy crowd of several thousand, flanked by Manchester police, brought the city to a halt. Demonstrations to free the imprisoned Robinson were held in New York, Austria, Norway, Canada and Russia. The demonstrations were sparked by the May 25th arrest of the conservative provocateur.

Robinson was arrested, tried and sentenced to 13 months in prison for trying to expose the truth about a Muslim pedophile ring.  He was arrested outside Leeds Crown Court for “incitement/breach of peace” after he tried to live-stream the verdict of Muslim men accused of child rape, trafficking, grooming and supplying drugs to children.  The outspoken Robinson was already serving a suspended sentence for a similar offense he committed last year.

In an unsuccessful effort to hide the truth from the world, the British government has placed a gag order on not only Robinson’s arrest but on the Muslim men accused of pedophilia. Independent journalists were reporting that articles regarding the arrest and imprisonment of Robinson are being scrubbed from the internet.

The UK has officially tilted into an Orwellian police state. Tommy Robinson has been sentenced to prison for a thought crime against the state.. and the govt, with @Google, has removed citizens ability to read about it.https://t.co/CQ9dO88rEz

The momentum for #FreeTommy Robinson is gaining steam and a large march is planned for Saturday, June 9, 2018 in London. A special group has been published on Facebook to help protesters make travel arrangement to and from the event from multiple destinations across Europe. Passion and simmering anger continues and alternative news websites are successfully getting the word out about the truth behind Robinson’s wrongful imprisonment. 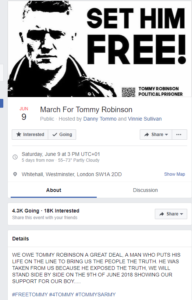 Supporters of Robinson are now facing backlash. According to an article by the Daily Star, a British firefighter was suspended after publicly declaring his support for Robinson on social media. The post read:

“Well after 22 years in the fire service as a firefighter for Nottinghamshire, yesterday I had a phone call from the fire service saying that I’ve been suspended from duty with immediate effect and I had to hand in my on call alerter and photo I.D card.

“On asking for what reason this was happening I was told I was going to be investigated on some of the content I had recently put on Facebook.”

“Since yesterday morning’s phone call from them I have since handed my notice in at the fire service.