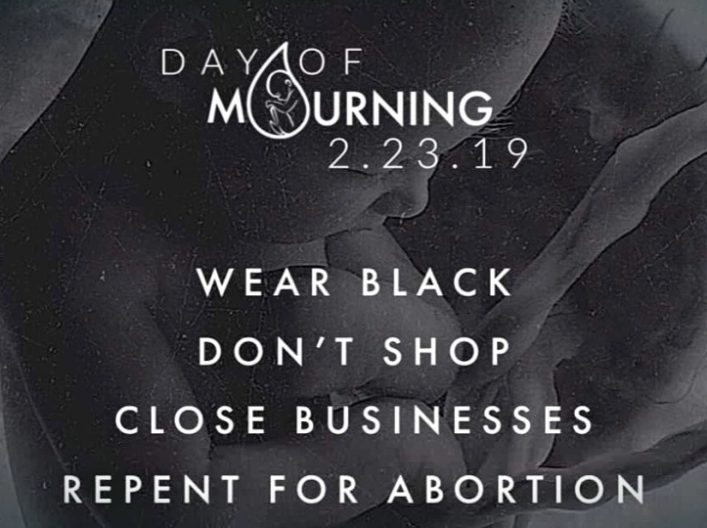 A national day of mourning has been called for Saturday, February 23, after New York passed a law allowing women to abort their baby up to and including birth. According to DayofMourning.org, “The state of New York has crossed a line of inhumanity that should drive us to our knees. Forty-six years of the state-sanctioned killing of our most helpless and defenseless children should cause us to weep, to mourn, and to take action.”

“A woman’s right to choose,” has been the mantra of the left for as long as I can remember. I’m ashamed to admit I believed all that nonsense despite having degrees in biology and microbiology. If the presence of bacteria, a single celled organism, is indicative of life on Mars, then when does life begin inside a mother’s womb? The Left seems to use illogical standards as to when human life is valued; if they value it at all. Do women care about the most helpless females who will never grow up to become women? Please name another species that willingly kills its offspring inside the womb. The words, “mother and father,” denote goodness, love and protection. Yet the protection of the most helpless is deemed unworthy and unnecessary.

Elizabeth Johnson known a the Activist Mommy, will be one of the speakers at the New York event.”God is doing something BIG! There is a stirring and a holy restlessness that is drawing His people to repentance and action. Don’t miss out on the awakening.” said Johnson.  Please watch her video below and remember: