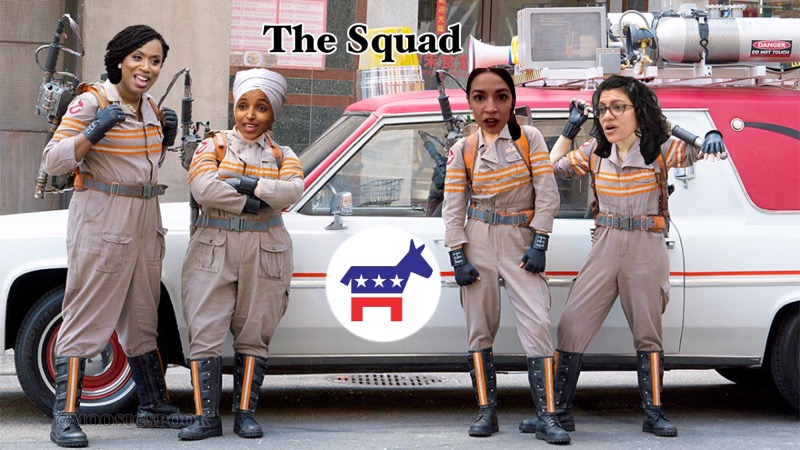 Get out the popcorn: Nancy Pelosi seems to finally be sick of “The Squad’s” attempted coup of her Democrat party control.

Pelosi feels that the four made themselves irrelevant to the process by voting against “our bill,” as she put it, which she felt was the strongest one she could get. “All these people have their public whatever and their Twitter world,” she said. “But they didn’t have any following. They’re four people and that’s how many votes they got.” ~ Dowd, NYTimes

Two of the four freshman (nicknamed “The Squad”) went to “their public whatever and their Twitter world” and fired back at Pelosi. Can you guess who? If you guessed AOC and Omar, you win! (Sorry, no prizes but bragging rights here.)

That public “whatever” is called public sentiment.

And wielding the power to shift it is how we actually achieve meaningful change in this country. https://t.co/u6JtgwwRsk

Not to be left out, Minnesota’s own embarrassment, ahem, Representative, Ilhan Omar, let her buddy AOC know she had her back:

You know they’re just salty about WHO is wielding the power to shift “public sentiment” these days, sis.

(Is Omar trying to do a reenactment of the recent Democrat debates? Or is tossing around Spanish typical for a Somali refugee? Inquiring minds want to know…)

The spat between The Squad and the Democrat Speaker of the House has caused CNN opinion writer, Dean Obeidallah to cry out “Why is Nancy Pelosi Slamming AOC and Helping Donald Trump?” Obedidallah lamented in the piece:

What makes Pelosi’s remark so stunning is that it flies in the face of her often-repeated philosophy that she has espoused to House Democrats since taking control of the chamber in the 2018 midterms. “Our diversity is our strength and our unity is our power,” she wrote last November.
Pelosi is 100% correct with that approach. That means, though, that diversity of opinion needs to be respected — not belittled. This unity is vitally needed in the time of Donald Trump, since the Democrat-controlled House is the only chamber that serves as a legitimate check on the President.

Perhaps Pelosi has tired of the constant barrage of idiotic comments and stunts made by The Squad? From AOC’s staged photos of her crying next to a fence surrounding an empty parking lot to Ilhan Omar’s antisemitic remarks, Pelosi has had her hands more full than a middle school substitute teacher during the last hour of school on a Friday in May.  While the democrat-controlled MSM has a freak-out over the public airing of Democrats’ dirty laundry, Deplorables can enjoy a show reminiscent of Kathy Bates in Fried Green Tomatoes – TAWANDA! – as Pelosi fights to regain control of her misbehaving children.

There is no love for the Speaker of the House by Deplorables; and the fact that Dowd describes Pelosi’s recent push for the border bill as a “moderate” move just shows how far left the Left has truly gone. However, one has to wonder at the outright ballsiness of these women and their audacity in their disrespect of the Speaker. Pelosi has spent 32 years in Congress – elected in 1987, two years before AOC was even born.  Love her or hate her, one has to agree that the woman has staying power and is well-known for her ruthlessness in dealing with those who would oppose her. (Pelosi’s daughter described how the Speaker would handle working with President Trump, saying, “She’ll cut your head off and you won’t even know you’re bleeding,” she told CNN. “That’s all you need to know about her.” ~ IJR.com)

The Squad may have “their Twitter world,” but Pelosi knows how to fight with the big boys and is unafraid of fighting dirty when necessary.  One can only hope that The Squad continues their middle-school Mean Girls-esque behavior because every time they open their mouths or tweet, they push more independent voters into the Trump Fold.