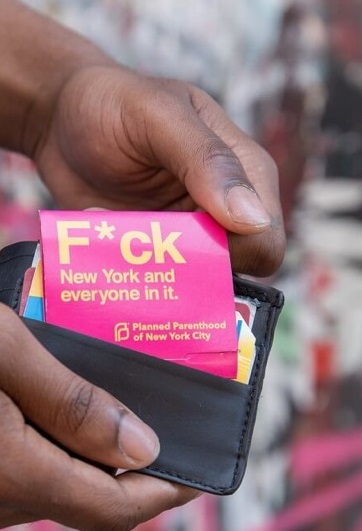 In this day of rising Sexually Transmitted Diseases (STD’s) and out of wedlock pregnancies, Planned Parenthood is rolling out a new marketing campaign entitled “Protect Our Freedom to F*ck” (asterisk included to protect the easily offended).

According to Human Defense.com, Planned Parenthood in New York City launched the campaign in the hopes of increasing donations to the famed abortion mill.

The campaign features a handout that contains a cheap condom and a crass message.

Planned Parenthood’s new marketing campaign is in contrast to the proposal that feminists of the Pink-Hat Brigade proposed just a few short months ago where the fear of overturning Roe v. Wade led women to propose a sex strike. The movement, which never took off, used the hashtag: “#Lysistrata2018”. In a tweet, one of the leaders of this proposal encouraged “single and dating” women to add a female judge emoji to their dating profiles to show they won’t date or sleep with anyone who is pro-life. Planned Parenthood is throwing that all out the window, encouraging women to sleep with whomever they wish.

No matter what, Planned Parenthood has outdone itself in the marketing department. But then again, it is only fitting that a filthy, vulgar and disgusting campaign is used to promote a place whose primary business is to kill babies.