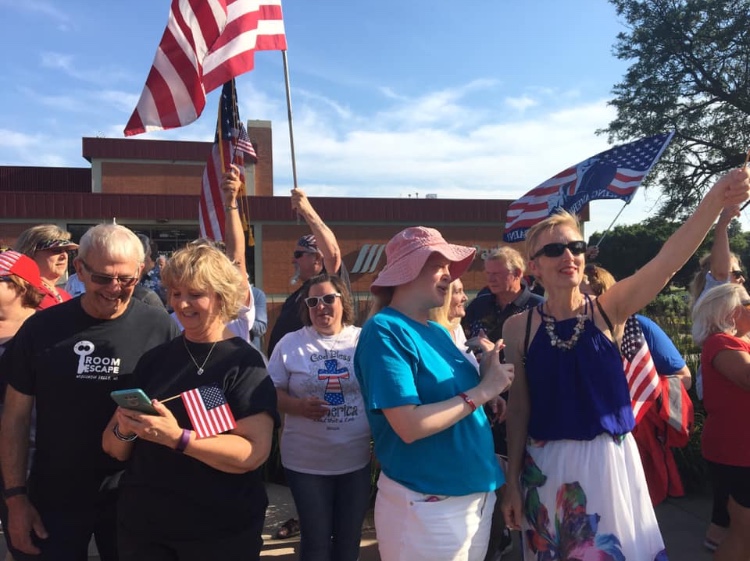 A few hundred Minnesota Patriots gathered on Monday night at St. Louis Park City Hall to object to the St. Louis Park City Council’s un-American decision to remove the Pledge of Allegiance from their meetings. On Tuesday morning, President Donald J. Trump recognized these Patriots with a tweet, vowing to help them in their fight for the right to say the Pledge of Allegiance. 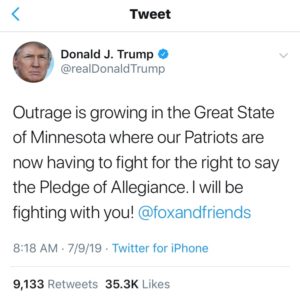 St. Louis Park city councilmembers felt it was necessary to remove the Pledge of Allegiance from their meetings because they thought it was insensitive towards immigrants in the community. On June 17th, the council voted unanimously to nix the pledge, claiming that residents in the increasingly diverse community may find it “unwelcoming“.

Funny how some new arrivals have a problem with reciting their new country’s Pledge of Allegiance and honoring the American Flag, yet have no problem accepting assistance from the American government.

St. Louis Park is located in Minnesota’s 5th Congressional District, which is represented by Congresswoman Ilhan Omar (D-MN). Omar has a reputation for spewing out criticisms against America, Jewish people, President Trump, Republicans and basically anyone who doesn’t agree with her.

The council chambers were packed to standing room only as Patriots, waving American flags, voiced their objections to eliminating the Pledge of Allegiance from the city council meetings and recited the pledge several times during Monday’s meeting.

Some pro-Pledge Patriots called for the resignation of the council members who supported the decision to remove the pledge.

If new arrivals feel so strongly against America, our customs, our culture and our country, why do they want to come here in the first place? And why do our elected officials feel compelled to accommodate the anti-American sentiments of these people?

I hear they don’t say the Pledge of Allegiance in Cuba or Venezuela. Maybe St. Louis Park should try holding their council meetings in those countries. I’m sure they will receive absolutely no objections to their decision there.