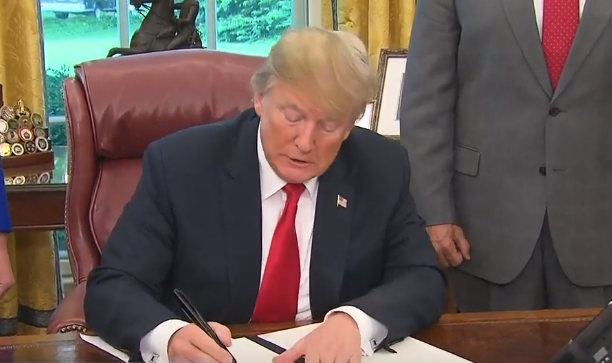 Today President Trump signed an Executive Order (EO) titled “Affording Congress an Opportunity to Address Family Separation.”  The EO addresses the issue of family units being separated when they are apprehended attempting to enter the United States illegally.  The order states:

It is the policy of this Administration to rigorously enforce our immigration laws.  Under our laws, the only legal way for an alien to enter this country is at a designated port of entry at an appropriate time.  When an alien enters or attempts to enter the country anywhere else, that alien has committed at least the crime of improper entry and is subject to a fine or imprisonment under section 1325(a) of title 8, United States Code.  This Administration will initiate proceedings to enforce this and other criminal provisions of the INA until and unless Congress directs otherwise.  It is also the policy of this Administration to maintain family unity, including by detaining alien families together where appropriate and consistent with law and available resources. (Emphasis added)  It is unfortunate that Congress’s failure to act and court orders have put the Administration in the position of separating alien families to effectively enforce the law.

The EO is in response to the recent reports of children, illegally brought into the country by adults, being taken from the adults at the time of entry due to the administration’s “zero tolerance policy.”  The zero tolerance policy requires that all adults attempting to enter the US illegally be prosecuted under the US immigration laws.  These laws include a 1997 law that dictated that children not be detained with adults, so by enforcing the current laws, children were being separated from parents and/or caretakers while the adults were detained for prosecuting.

The mainstream media and Democrats jumped on the Trump administration for enforcing laws and have driven an hysteria that has resulted in threats of violence against ICE agents, Barron Trump and others.

Key reportedly phoned Rep. Mast’s D.C. office on Monday, warning the intern who received the call that he was going to “find the congressman’s kids and kill them,” say court documents filed in U.S. District Court.

“If you are going to separate kids at the border, I’m going to kill his kids,” Key said in one of 478 calls to Mast’s office, according to the filings. Key also allegedly contacted Senators Bill Nelson and Marco Rubio.

Melania Trump also reportedly contacted the Secret Service after actor Peter Fonda tweeted vicious statements about Barron Trump.  In the tweets, Fonda stated Barron should be ripped out of Melania’s arms and put in a cage with pedophiles.

The Daily Caller is reporting that New York University adjunct professor, Sam Lavigne, is responsible for collecting and compiling the personal information of over 1500 ICE Agents and distributing that information to members of ANTIFA:

He created a database of 1,595 ICE employees using their LinkedIn profiles and shared it to his 3,600 followers on Twitter Tuesday morning.

Antifa, the far-left organization labelled as  “domestic terrorists,” picked up the database and spread it to their followers on Twitter hours later. The database also spread to a subgroup on Reddit that encourages spreading personal information — such as where they live and their contact information, known as “doxxing” — of people who they consider “Nazis” or “alt-right,” which, according to them, includes ICE and the NSA.

“Doxxing ICE agents is good and moral,” one Reddit user posted on a thread that shared the database.

“I’ve downloaded and made available the profiles of (almost) everyone on LinkedIn who works for ICE, 1,595 people in total. While I don’t have a precise idea of what should be done with this data set, I leave it here with the hope that researchers, journalists, and activists will find it useful,” Lavigne wrote in a now-deleted Medium blog post.

The blog post was deleted by Github, which cited the post violated its community guidelines.  However, members of Antifa were still able to access the database through an internet archive.

On Wednesday President Trump said, “We are keeping families together and this will solve that problem. At the time we are keeping a very powerful border and it continues to be a zero tolerance, we have zero tolerance for people that enter our country illegally.” President Trump continued, “I didn’t like sight or the feeling of families being separated it’s a problem that’s gone on for many years, too many administrations.”

President Trump also said the administration would still be working with congress to fix the country’s broken immigration system.