Perpetual Presidential candidate Bernie Sanders is a cheapskate and an uncharitable scrooge.

Sanders, a socialist, who calls for “shared sacrifice” and preaches to his cortex-absent followers about how greedy and selfish high-income earners are, was recently discovered to be greedy, stingy and selfish himself when he released his tax returns for the past decade.

See, in Bernie’s World, YOU have to give away most of YOUR salary.  Him? Not so much.

The Daily Wire called out Sanders for being a colossal hypocrite of the highest order by posting a bunch of hilarious, yet truthful Tweets calling out the frumpy Vermont senator on giving only 1% of his $1,062,626 earnings to charity in 2016, which amounted to $10,600. 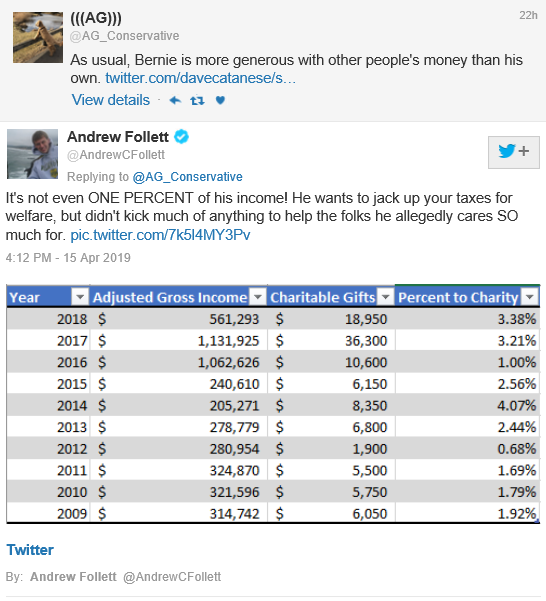 It was revealed that Sanders became a millionaire after his unsuccessful run for the Oval Office in 2016.  We all fondly remember that former DNC Chairwoman Debbie Wasserman-Schultz tipped the primary in favor of Hillary Clinton because it was her turn to be president. We all know how that turned out.

Bernie Sanders is also the owner of three homes! How many of his adoring followers own three homes? The Deplorable Housewives of the Midwest are wondering if Bernie shares those homes with those who are in need of a place to live?

Left-leaning publication Vanity Fair even called out the irony of America’s favorite socialist presidential candidate, “Bernie Sanders now has one thing in common with the millionaires and billionaires and other 1 percenters he so frequently attacked on the campaign trail: he now owns his very own summer home.”

Sanders is unapologetic over his newfound status as a millionaire telling FOX News at a recent Town Hall broadcast, “If anyone thinks that I should apologize for writing a best-selling book, I’m sorry, I’m not going to do it.”

So, the next time you hear Bernie attacking millionaires and billionaires, remember that he is now part of this elite club and each time he rails against them, he is also attacking himself. And remember how little of his millions he gives to help the people he claims to care so much about.