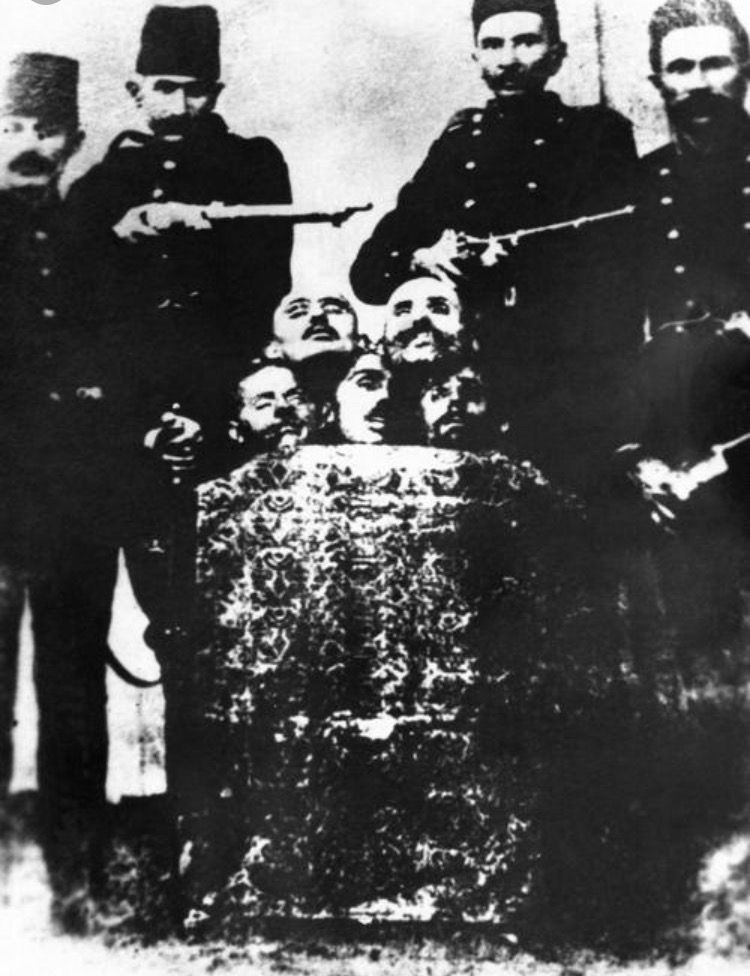 I don’t consider myself Islamophobic.  I do, however, consider myself to be Shariaphobic. I am scared of Sharia Law.  Sharia Law directly impacted my family and shattered the young life of my grandmother-in-law.

About 103 years ago, in a small village in Armenia, my husband’s grandmother, Khatun, was an eight-year-old little girl. We don’t know very many details about her early life other than the village where she lived was primarily Christian and she lived with her parents and siblings who were themselves Christians.

In a matter of minutes, young Khatun’s life and everything she knew was destroyed because her family refused to submit to Islam and Sharia.

A group of Muslim Turks muscled their way into the homes of the small Armenian village where Khatun’s family lived. The Turks wanted the Armenians to renounce their Christian faith and convert to Islam and live under Sharia Law.  When Khatun’s family refused to give up their Christian faith, the Turks slaughtered everyone in her house.  By the grace of God, Khatun was saved. At eight years old she was left alone in the world, having watched her parents’ and siblings’ violent and bloody deaths in front of her own young eyes. As an adult, she never spoke about the horror she witnessed at such a tender young age. But in an instant, her life transformed into a life of survival as she was savagely left alone in the world.  Eventually, she did make it to America many years later, where she got to experience liberty and freedom for the first time in her life more than 30 years after her family was brutally massacred inside their home in Armenia.

The Qu’ran 8:57 says, “If you meet them in battle, make a fearsome example of them to those who come after them, so that they may take heed.”

The Turks made a fearsome example of Khatun’s family and the 1.5 million other Armenians who would not convert to Islam. Those who survived took heed and left to find a less oppressive life elsewhere.

One can only imagine what kind of life Khatun’s family would have had if they weren’t killed. What would have happened if they decided to submit to Islam? Would they have survived? Would they have been treated justly by the Turks if they converted?  Those questions will forever remain unanswered as the family refused to give up their Christian faith, which resulted in their deaths.

But could history repeat itself one-hundred years later in America?

Former Director of the Central Intelligence Agency (CIA) Jim Woolsey said the Muslim Brotherhood is largely behind the effort to bring Sharia to America. Speaking at the Conservative Political Action Conference (CPAC)  in 2011, Woolsey defined Sharia as a “theocratic dictatorship extremely opposed to democracy” and a movement to “eliminate and destroy western civilization.”

There are many notable Americans who advocate for Sharia Law here in the United States.  Congresswoman Maxine Waters (D-CA) has no problem defending Sharia Law and calls any argument against it, “scare tactics”.  This from a woman who took an oath to defend the Constitution of the United States of America.

“Over the last year, and due to the focus of House Republicans on so-called ‘Muslim radicalization,’ we have seen politicians and pundits attacking the Islamic faith as a security threat to the United States,” Waters said. “Across the country, these people are exploiting fear and trying to convince state legislatures that the state adoption of Sharia tenants is the strategy extremists are using to transform the United States into an Islamic country.” Waters then accused Republicans of having a “disrespectful approach to fighting extremism contrary to American values” and claimed the Republicans are the ones who are a threat to national security.

Linda Sarsour, a co-organizer of the Woman’s March movement says that Sharia is not imposed on those who don’t follow the law.  However, through political correctness, non-Muslims are being imposed upon by Sharia Law every day.

According to Dr. Bill Warner’s “Sharia Law for Non Muslims“, textbooks in America must be approved by Islamic groups, American employers and schools are met with demands for time and space for Islamic prayer and the American banking system now has Sharia compliant financing.

Minneapolis has a Sharia compliant program in place since 2006 that has loaned millions to Muslim business owners.  Sharia Law prohibits Muslims from paying or earning interest in financial transactions referred to as “riba“.

Under Sharia, nothing about Islam may be criticized. Last month, when FOX 9 reported on widespread daycare fraud by Somali-run childcare centers to the tune of $100 million, the Council on American Islamic Relations (CAIR) held a press conference responding to the daycare fraud report, saying that legislators are playing into the anti-Muslim movement in this country and that suitcases full of cash are the only legal way Somali immigrants can get money to relatives in East Africa.  “The fact is the Muslim community in Minnesota is growing in wealth, they’re growing in size and that’s an easy way to explain that story.” No fraud here.  It’s all sunshine and roses.

In England, we are witnessing what happens when you criticize Islam.  English Defense League founder Tommy Robinson was arrested last month while streaming a Facebook live video outside a courtroom where he was broadcasting the trial of a gang of Muslims accused of rape, which the government wanted to keep under the radar.

When Minnesota’s first Somali-American state representative was elected in November 2016, we learned that she had a “cultural husband” whom she married in the Islamic tradition in addition to having another husband (rumored to be her biological brother) whom she married under the laws of the United States.  Polygamy is currently not legal in the U.S.A. Yet when this matter was brought up, the representative called the allegations into her multiple marriages “Trump-style misogyny, racism, anti-immigration rhetoric and Islamophobic division.” End of story, never to be discussed again, because if you do, you’re an Islamophobe.  Now she’s running for U.S. Congress.

We have Muslims working as cashiers in grocery stores who refuse to touch pork products. Here is a post from an angry Minnesota Wal-Mart customer who wrote about their experience on social media when they purchased ribs and brats from a Somali cashier: 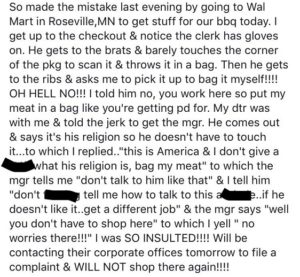 Documentary producer Ami Horowitz visited the Cedar-Riverside neighborhood of Minneapolis, Minnesota a few years ago and asked the “new Americans” if they prefer the laws of the United States or Sharia Law. Those interviewed said they were more comfortable living under Sharia.

Ayaan Hirsi Ali, a Somali-born Dutch-American activist, has been famously speaking out against Sharia.  In her article “How Do You Solve A Problem Like Sharia?”, Hirsi lists some of the laws she calls “demeaning” and “degrading” towards women.  For example, under Sharia a woman’s testimony is worth half of a man’s testimony in court (Quran 2:282); men are “guardians” of women and women are to be obedient to men and husbands may beat their wives for disobedience (Quran 4:34).

The more I read about Sharia, the more I fear it.

The more I fear it, the more I see it implemented into our American fabric.

And then I think of Khatun and her family.