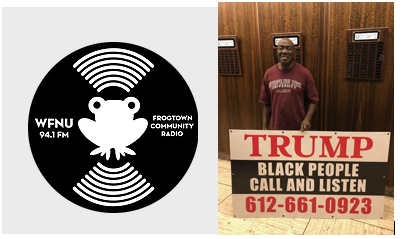 WFNU Frogtown Community Radio 94.1 FM host Lucky Rosenbloom is coming under fire for violating a subjective station policy regarding religion for quoting a Bible verse on his Monday evening program.  Rosenbloom’s show, Black Pride and Honor, offers opinions on social issues from a conservative, Christian and Republican perspective. Rosenbloom, the station’s sole pro-Trump host,  claims his freedom of speech is being prohibited by WFNU.

Lucky Rosenbloom is no stranger to controversy. With a booming voice, a big personality and a heart to match, Lucky is an outspoken advocate for African Americans. With a God-given mission to fight racism, Lucky’s message to black men that they are powerful and self-reliant is causing liberals in St. Paul to quiver with fear.

Rosenbloom’s WFNU radio show, Black Pride and Honor is unique. “I’m the sole conservative, Republican, Christian and pro-Trump voice at WFNU,” said Lucky. “I offer the truth regarding the treatment of Black people by Democrats and that’s why the Left fears me,” he said.

WFNU management contacted Rosenbloom after he read a Bible verse in which Paul ordered an evil spirit out of a woman in the name of Jesus.  “I said he made the Devil mad. Amen!  Now  I am told the FCC does not allow this kind of talk.  I called the FCC and was told they do not regulate this type of speech so how can WFNUs policy prohibit my First Amendment Right?” he said.

Station co-manager, Katherine DeCelle, contacted Lucky on Wednesday, October 10, claiming that statements made on the show are in violation of FCC programming rules regarding non-profit radio stations. In an email to Rosenbloom, Decelle states,

Hey Lucky. We’ve had some complaints from listeners regarding your show. While  you are able to make your stance as a Christian known, you are not allowed to “preach” to listeners. Meaning, you can say “I’m a Christian” but you can’t tell people to be Christians. This violates our LPFM license and we can be fined and taken off the air. Again, you are allowed to tell people about your own experience but are NOT allowed to tell people what to do. No call to actions.  If  you have any questions let us know. I’d like you to keep your show on WFNU, but if this happens again,we will have to take action to remove your show.

After contacting the FCC himself, Lucky enlightened the station manager that no FCC rule exists regarding  religious speech and WFNU’s LPFM license is not at risk. In his email to DeCelle, Lucky states,

The rules you stated from the FCC relative to the religious content is wrong ….  When I started I and others in the big group meeting accepted WFNU policy thinking it was a FCC mandate.

Can I read and give my opinion of a Bible verse, or not read a Bible verse at all? If there should be no readings from any religious material at all this is going to open up something very big.

When asked about quoting from the Bible, Lucky said, “My religious content is educational.  I say what any specific verse expresses….  What you heard on my show, is thus, in compliance with both WFNU policy and the FCC.”

Lucky fired off an email to the station manager and filed an official complaint with the Board of Directors regarding the threat of removing his show from the air for reading a Bible verse:

I am making an official complaint regarding this matter and want my complaint to go directly to the Board for violation of my programming rights in compliance with FCC, and your own policy. My show meets FCC guidelines with respect to religious content.

After receiving Lucky’s complaint, management is now refusing Lucky’s request to take his complaint directly to the Board.

…. the  protocol that you and any other programmers must follow is to take the issue first to the programmers meeting.  If not resolved there, the issue may come before the Board.

According to the schedule for the Programmer’s Meeting, which will take place Saturday, WFNU management is requesting that other hosts listen and review Lucky’s  show, Black Pride and Honor, for offensive content. Program hosts are to have their questions ready regarding offensive content  for the next meeting. “This is creating a hostile working environment,” said Lucky. “Asking other hosts who do not share my world view to review my show for offensive content is a violation of my freedom of speech.”

You can listen to the show in question using this link.  After listening, please contact WFNU radio station at stationmanager@wfnu.org and let them know you enjoyed Lucky’s show. It’s important that we keep this lone conservative voice alive on WFNU. You can also call in support of Lucky at 763-202-1847.

Lucky has filed a complaint with the FCC and the Minnesota Department of Human Rights regarding his treatment by WFNU. The mantra of attacking black conservative, pro-Trump, Christians is nothing new for the Democrats. For example, Diamond and Silk have been called a “minstrel show” by Fox News commentator, Juan Williams yet he is allowed to remain on the air. Hold on folks! It’s now acceptable practice to attack, besmirch and smear pro-Trump, conservative, Christians.

Juan Williams who happens to be one of the Gate Keepers on the Democrat Plantation, just showed his true colors. This is what a Lowlife, Disrespectful, Racist Black Man looks like. Does he refer to his wife as a Minstrel Show?
Don’t Come For Us, If We Didn’t Send For You! #Envy