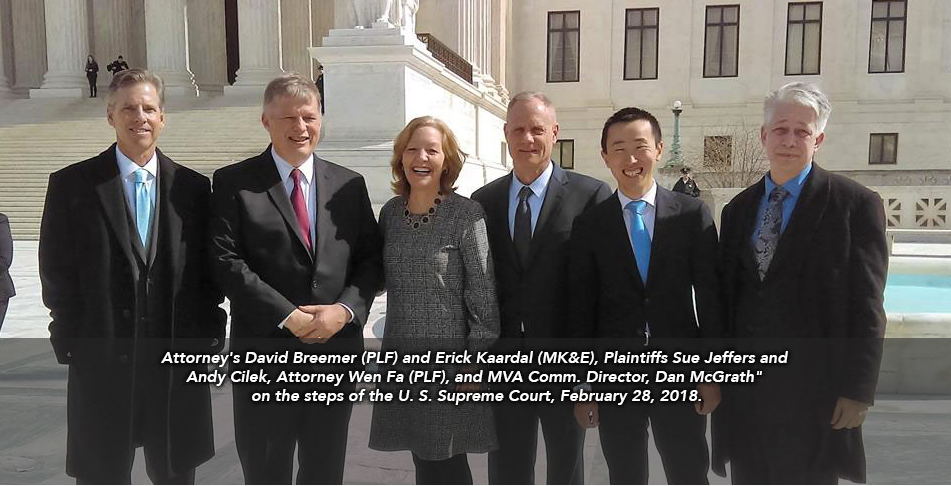 Imagine, going to the polls on election day dressed in your favorite T-shirt to be told by the chief election judge you must remove your shirt before voting. Surprised, you politely decline. Minnesota Statute gives state election judges the authority to arbitrarily decide if the clothing you are wearing to the polls is prohibited under the political attire ban. Violators are subject to civil penalty and prosecution as a petty misdemeanor.

Andy Cilek, Executive Director of the Minnesota Voters Alliance (MVA), was prevented from voting in the November 2010 election because he was wearing a shirt with the Tea Party Patriots logo and a “Please I.D. Me” button. The MVA as well as plaintiff Susan Jeffers, argued the apparel ban was unconstitutional. After the District Court granted the State’s motion to dismiss and the Eighth Circuit confirmed the dismissal, Cilek and Jeffers petitioned for review of their First Amendment claim.

Today, the U.S. Supreme Court, in a 34 page decision, struck down Minnesota’s broad ban on political attire in the polling place in a 7-2 decision. The opinion written by Justice Roberts states,

The State therefore must be able to articulate some sensible basis for distinguishing what may come in from what must stay out. The unmoored use of the term “political” in the Minnesota law, combined with haphazard interpretations the State has provided in official guidance and representations to this Court, cause Minnesota’s restriction to fail this test.

The decision of the court in the ruling of the MVA vs. Mansky declared that:

The Minnesota statute’s vague definition of “political apparel” allowed election judges to determine who was allowed to cast a ballot and who was not based on which side of the political aisle the election judge stood. Political attire in Minnesota was banned based on any subject on which a political candidate or party has taken a stance. In other words, “Please I.D. Me” buttons are banned because it’s a Republican issue and “Black Lives Matter” T-shirts would be banned because they are considered to be Democrat. Any number of associations, educational institutions, businesses and religious institutions could have an opinion on an issue and would therefore be banned under current law. Should a scout leader stopping in to vote before heading to his/her meeting be required to cover their uniform? Yes, this is how ridiculous the polling place has become in Minnesota!

The state of Minnesota laughingly stated the ban covers only apparel promoting groups whose political positions are sufficiently “well-known.”  Judge Roberts then asks, “Well known by whom?” Roberts states that arbitrary discretion by the state resulted in discrimination.

In the oral arguments, Justice Alito agreed that the law does seem arbitrary and observed that “so many things have political connotations, and the connotations are in the eye of the beholder.” How could any poll worker, he asked, be even-handed in enforcing the regulation?

Daniel Rogan, who defended the statute for the state before the Court, stated that the political speech being conveyed by the wearer had to be “understood as relating to electoral choices and it has to be well-known.”

Alito said “that makes it worse” since the poll worker applying the “reasonable person” standard has to not only recognize the clothing is political speech but well known political speech.

Rogan answered that what the standard meant was it would have to be something a reasonable person would consider “clearly political” and “something that’s going to be reasonably understood by voters in the polling place.” What followed was a line of questioning by Judge Alito that will go down in the history books as a prime example of liberal cluelessness and hypocrisy.

Alito’s questions to Rogan are as follows:

JUSTICE ALITO: Okay. How about an NRA shirt?
ROGAN: An NRA shirt? Today, in Minnesota, no, it would not, Your Honor. I think that that’s a clear indication — and I think what you’re getting at, Your Honor -­

ALITO: . . . How about a Colin Kaepernick jersey?
ROGAN: No, Your Honor, I don’t think that that would be under — under our statute. And I think -­

Justice Sotomayor was joined by Justice Breyer in dissenting. Their argument is that the court has not afforded the Minnesota state courts “a reasonable oppotunity to pass upon” and construe the statute.

2 thoughts on “Supreme Court Says No to Voter Dress Code”