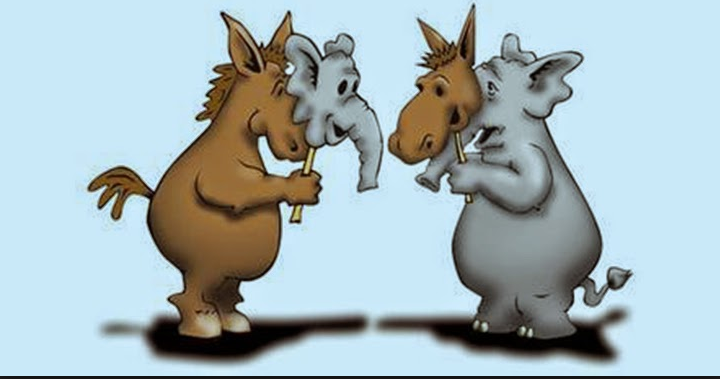 Historians may classify the 21st Century as “the age of fake;” fake news, fake science, fake Republicans. Like the used car lot, we are convinced by the salesman that we are getting a good deal but in the end, we walk away feeling screwed over. The Minnesota GOP is the used car lot of political parties. Each election cycle belches forth an array of candidates that convince us this time things will be different. We become excited, work hard for them, send them our hard earned money then vote for them only to find out after the fact that it was all a smoke screen. Fake is cheap and easy but it leads down the path to destruction.

Is the Minnesota Republican party headed for destruction? Taking a look at the Minnesota GOP affiliate list is a smorgasbord of fake. Those with common sense would assume that all affiliates must stand in agreement with the party platform, be governed by strict bylaws and rules and should they fail to comply the GOP simply terminates their affiliation. Surely, the MN GOP leadership must be somewhat choosy as to who receives the nod to establish a GOP affiliation. As it turns out, the GOP allows just about any group to form an affiliation and use the word “Republican.” This can be confusing for those of us who think the GOP list of affiliates are credible.

The Republican Liberty Caucus sounds good. As Republicans, we tend to believe that our party stands for liberty; so far so good, until one reads the bylaws. Article 3, Membership, states that individuals, ” no matter their political affiliation,” may become a member. It’s acceptable to have one proverbial foot in the GOP and one foot in the DFL, constantly straddling the fence. This has led to the infiltration of the GOP by liberals. The RLC has supported liberal policies, persuaded gullible Republican legislators to do their bidding, and weakened support for the Republican party in Minnesota.

In 2015, Democrats, the Minnesota RLC, and liberal activists, joined forces with nationally funded lobbyists and set a goal to push through a broad agenda of corrupt election law changes, with a centerpiece of allowing non-incarcerated felons to vote. The RLC lit dropped the MN Capitol, became cozy with liberal lobbyists and their organization,  and actively participated in recruiting republicans to author this damaging legislation.  Their story-line was about the rights of felons and nothing else. 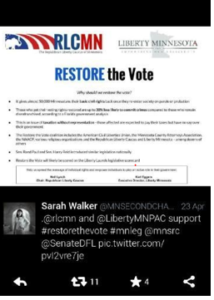 The Minnesota RLC supposedly supports limited government and the Constitution.  Article VII, Section 1 of the Minnesota Constitution says felons may not vote “unless restored to civil rights.” Persons on probation do not have their full civil rights restored since they are restricted as to whom they may associate with, where they may travel, and are under government supervision.  Since the Judicial branch removed the right to vote, only they can restore the right to vote. Apparently, this group of aging hippies and rollie-pollie “never Trumpers” forgot about the MN Constitution and the purpose of criminal sentences.  The purpose of criminal sentences is to protect citizens and elections from those who have not shown they are trustworthy or willing to comply with the law.  The judgments of courts in assigning necessary probation should be respected and supported, not undermined by a grant of partial “pardon.”

The Minnesota RLC lacks intellect and good judgement which led to the decision to hold their annual convention at the Dar al Farooq Community Center May 12th.  Sharia law is the antithesis of the U.S. Constitution, women’s rights and human rights. This bold move was a desperate cry for attention by a group of wannabes. The negative attention has rubbed off on the GOP causing conservatives to lose faith in the party as a whole.

Like my mama always said, you are who you hang out with. It’s time for the MN GOP to terminate their relationship with the Minnesota RLC or they will continue to lose credibility and corrupt our Republican legislators by scheming with the Democrats and their liberal operatives.

2 thoughts on “The Age of Fake”