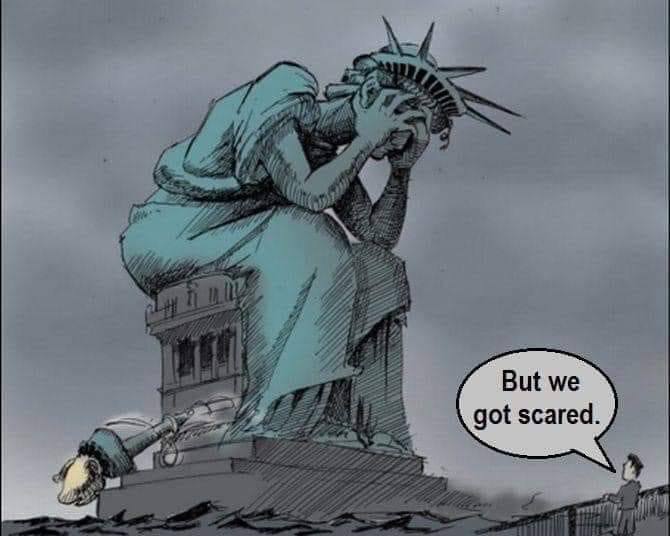 Life is filled with risk. When will Americans reclaim their right to take risks?

For the past month, America’s governors have demanded that Americans stay home.  The media, politicians and doctors utilized the best weapon they have against Americans: Our compassion.  If they had said, “Stay home or die!” Americans would have shrugged their shoulders and said, “Meh.” But no, that isn’t what they said. We were told, “Stay home and PROTECT OTHERS.” Americans are compassionate. We are responsible. Faced with an invisible enemy and told that we could be carrying a virus without even knowing we had it, we complied. Schools closed, “non-essential” businesses shut their doors. After four weeks, at least 22 million Americans have filed for unemployment.  Those claims do not include all the people who were not able to get through to their states’ unemployment system due to massive failures of antiquated systems. Nor does it include the small business owners who have had to shut their doors and are uncertain of whether they will ever reopen.

Americans complied with the shutdown orders because Americans are good, compassionate, responsible people. Those who spoke out early about the lockdowns were harassed and called “stupid and inconsiderate” by others. Governments set up tip lines for neighbors to snitch on neighbors who are presumably “not following social distancing rules” or “non-essential businesses” who are attempting to remain open under the draconian measures.

Americans were told we must “protect others” and keep the hospitals from being “overwhelmed.” All “elective” surgeries have been canceled. Clinics around the country have closed. Eye doctors and dentists have shut their doors. The “surge” we were warned against showed up in a few cities, but most of America has not seen anything of the sort. Hospitals are being forced to lay off workers, and yet, we’re still being warned of a coming “surge.”

Meanwhile, governors change the goalposts from “flatten the curve” to “more testing” to “we have to have a vaccine” before they will open the states. The shutdown measures in some states now include prohibitions on visiting friends or neighbors, buying gardening seeds or boating with your family on a lake.  The measures have gone beyond “protecting others” to nearly martial law in some states.

When will Americans stand up and reclaim their right to take risks? Every time we get into a car, walk across a street, choose that gas station convenience food, we take a risk. Getting pregnant – risk. Falling in love, flying in a plane, swimming in the ocean, taking a bath – all are risks.

Electrical linemen, police officers, military – all take risks every day whether there is a virus, an “invisible enemy” lurking or not.  Every time you flip on your electricity, some lineman, somewhere, took a risk to build that powerline and substation to provide you with electricity. Should they have said “No thanks, that’s too risky?” A police officer was killed while on a domestic violence call in Indianapolis last week. Should she have said, “mmm nah, too risky” and not heeded the call?

Americans are brave. Our country was built on the idea that risk is a part of life. How many of us have ancestors who trekked over the ocean and then took a journey into the wilderness on prairie schooners for the freedom and prosperity promised to them? How many people living in America today fought to leave oppressive regimes and traveled to America for the liberty our Bill of Rights holds?

Four weeks of shutdowns has resulted in 22+ Million Americans unemployed. Our economy is crashing. In the hope of keeping us alive we are going further and further into debt – some estimates our national debt at $30 TRILLION. And yet, Americans cower in their homes and call the police on those who would DARE step out of the “social distancing” line.

This is not the America we should be leaving for our children and grandchildren. This is not the America for which our Founders fought. They did not say, “This Bill of Rights is great UNLESS there’s a pandemic. Then, sorry, folks, it’s optional.” NO. The Founders fought for freedom from Britain in the middle of a smallpox epidemic, under horrid conditions and still they persevered.  They took RISKS because FREEDOM was at stake.

Will Americans find their courage to step up and cry out “We are AMERICANS. We take risks. We demand our freedom BACK!”