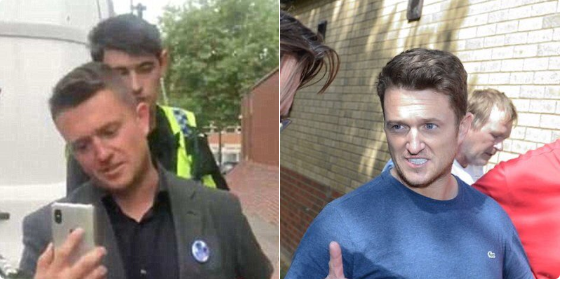 On August 1st, 2018, a noticeably thinner Tommy Robinson was released from prison.

Tommy Robinson, a British anti-sharia activist and journalist, was arrested, tried and sentenced within 5 hours by Judge Marson to 13 months in prison on May 25th for trying to expose the truth about a Muslim pedophile ring.  Robinson was arrested outside Leeds Crown Court for “incitement/breach of peace” after he tried to live-stream the verdict of Muslim men accused of child rape, trafficking, grooming and supplying drugs to children.

Canadian journalist, Ezra Levant from The Rebel,  tweeted that the emaciated Robinson had a fatwa on his head and has spent more than 2 months in solitary confinement. According to an article by The Stream, Robinson was facing death in prison as Great Britain has a history of “judicial murder.”  Kevin Crehan, the man sentenced to one year in prison for leaving a bacon sandwich on the front steps of a mosque in 2017 was murdered in prison by violent Muslim extremists and it was feared that Robinson might face the same fate.

According to Levant, Robinson’s cell door at Onley jail was often left unlocked and his prison food was cooked by prisoners in a Muslim gang. It appears that starvation and months in solitary have definitely taken its toll.

If there was a fatwa on your head, and your prison food was cooked by prisoners in a Muslim gang, would you eat anything unsealed? Tommy’s family or friends would have arranged for outside food. But starvation, along with solitary confinement, was Theresa May’s order. A scandal. https://t.co/TaKUPWisY2

At the court of appeal on Wednesday, the lord chief justice, Lord Burnett of Maldon, said the ruling in Leeds was “flawed” and there should be a retrial. Robinson was released on bail on condition that he attend a retrial before the recorder of London at a date to be determined and he must adhere to keeping a distance of at least 400 meters from Leeds crown court.

In the judgement, Lord Burnett of Maldon rejected Judge Marson QC finding of contempt because the court should have waited to hear the case on a “fully informed basis.” The chief justice goes on to state, “we are satisfied that the finding of contempt made in Leeds following a fundamentally flawed process, in what we recognize were difficult and unusual circumstances, cannot stand. We will direct that the matter be reheard before a different judge.”

The judgement issued states, “A further difficulty arises from the limited opportunity available to the appellant’s counsel to investigate matters relevant to mitigation at Leeds Crown Court” and  “It would be unusual, to say the least, for a man with three young children to be sent to prison at a first hearing without some independent inquiry into his family’s circumstances.” In other words, Tommy was tried in a kangaroo court and sentenced to prison without his attorneys being allowed to investigate and without the well-being of his family taken into account.

Today’s ruling was a stunning victory for Robinson and a rebuke of the Leeds court.

So we now know, irrefutably, from the Lord Chief Justice himself, that Tommy Robinson was improperly tried, improperly convicted, improperly sentenced and improperly treated in prison. Every single element of his treatment was illegal. Everything. He was a political prisoner.

Ezra Levant explains the horrors Tommy faced while held as a political prisoner in Onley jail, a prison populated by Muslim gangs.