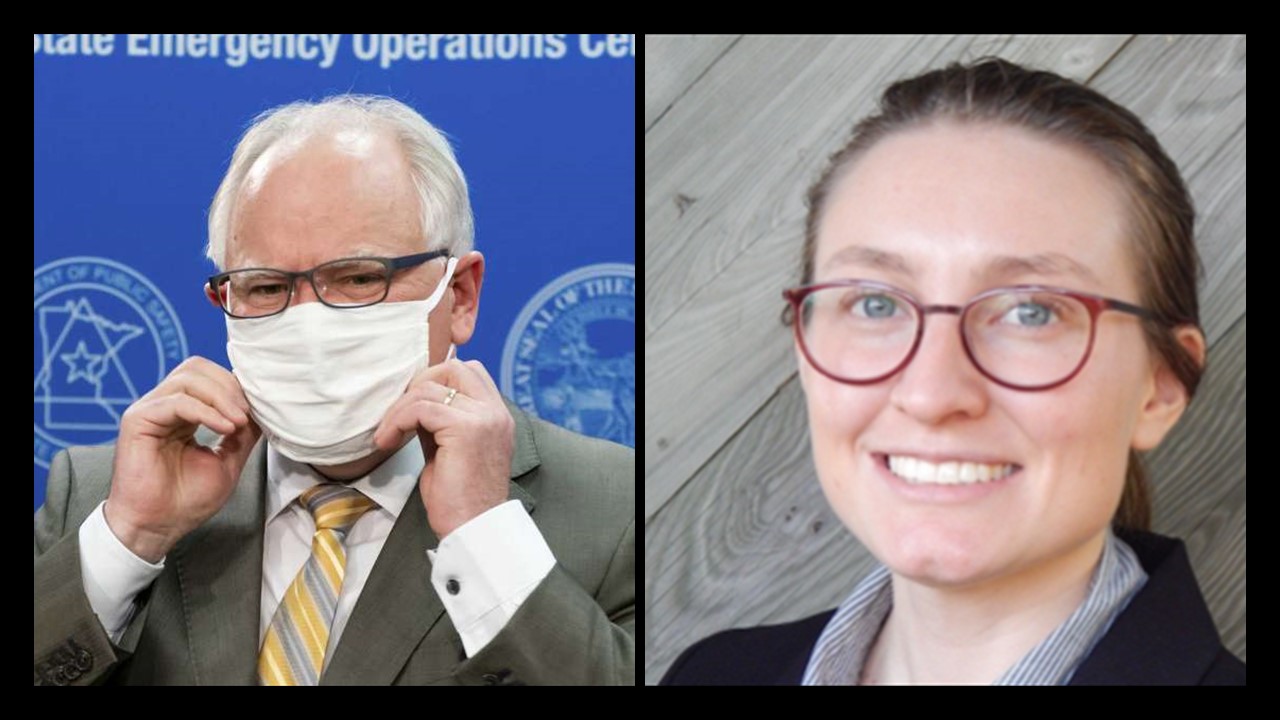 Minnesota State Senator Scott Jensen (R-Chaska) revealed recently that University of Minnesota grad students with absolutely no experience in epidemiology developed the models that were used by Minnesota Governor Tim Walz (D) to determine his endless lockdown of the state, putting millions of Minnesotans on house arrest and destroying the state’s economy.

Trust the experts we’re told.
I’m joining Laura Ingraham tonight to discuss policy decisions that have contributed to the uncertainty of the fatality rate. This was my speech from the floor of the Senate today. Tune in to Fox News tonight at 9pm – https://t.co/ykhCkqeoD9 #mnleg pic.twitter.com/NihxuKcFyn

Marina Kirkeide, a recent graduate and part-time research assistant at the University of Minnesota’s School of Public Health, was tasked by associate professor Shalini Kulasingam, along with two other research assistants, to work “through the day and night” over a weekend to get a COVID-19 model to Governor Walz.

You would think that during something as important as an “pandemic”,  Walz would use the top expert epidemiologists with years of extensive experience to develop comprehensive models and metrics to determine the lives of over 5 million Minnesotans.

Walz used students with no apparent expertise in modeling for pandemics, specialized medicine or public health to whip up a model over a weekend to determine his oppressive policies.

“I don’t think a lot of researchers get to work on something over the weekend and have public figures talk about it and make decisions based on it three days later,” Kirkeide bragged in the University of Minnesota press release.

The press release stated that Kirkeide and another graduate student Abhinav Mehta helped to build custom-created mathematical models that resulted in two scenarios related to Minnesota’s COVID-19 outbreak. One model, which proved itself to be way off, predicted that the virus would peak April 26 in Minnesota if measures were not taken to mitigate the virus. The model predicted the virus’ death toll would be 74,000.  The other model, implementing significant and staged mitigations, had the peak occurring on or around June 29 with a predicted 50,000-55,000 deaths.  So far, the Minnesota death toll is at 700 (as of May 16).

And think of all that time Kirkeide and Mehta put into this effort! A whole weekend! I’ve seen frat parties last longer than this project!

Was there a peer review for this study? Was there any kind of testing to determine if the data that was slapped together would have any validity? Did the professors who enlisted these students check any of the models?

The University of Minnesota admits that Governor Walz relied heavily on Kirkeide and Mehta’s projections when he issued his stay-at-home orders. And here we are, with Governor Walz issuing endless edicts to keep businesses closed, urging people to wear masks, limit their activities and rat-out their friends and neighbors who don’t comply with Walz’s orders. No restaurants. No haircuts. No small businesses. No playgrounds. No church services. No social gathering. You get the idea.

As a result of Walz using these models to determine policy, Minnesota now has record unemployment, destroyed businesses and livelihoods and a totally wrecked economy.

Speaking on the floor of the Minnesota senate on May 15, Jensen said sarcastically, “Congratulations, Marina. We have over 650,000 Minnesotans unemployed. We have absolutely imploded our economy. But, I’m really glad you got to participate, especially with your broad breadth of experience in healthcare. I know you’re going to medical school this Fall, but when I looked high and low on the internet for what experience you had in healthcare, I saw that you marched in a May Day Parade dressed up as a cow puppet. And I saw that you made some denigrating remarks about the University of Minnesota research program in regards to how they treated animals, after the University of Minnesota found itself under the spotlight using animals for human research to try to find the answers to diseases so that we can help 5-year-olds to grow up to be 10-year-olds…”

Most of the COVID-19 deaths in Minnesota have come from long-term care facilities. In fact, Minnesota leads the nation with 83.9% of the deaths occurring in people living in long-term care facilities, Senator Jensen, who is also a medical doctor, said. Jensen emphasized these deaths could have been prevented. He said Minnesota did everything to flatten the curve and help healthcare facilities ramp up their capabilities so not to overwhelm them. However, Jensen said, “We never protected our seniors that were in nursing homes.” He said that staff was allowed to move from one facility to another, thereby spreading the virus. No one prepared for this tragedy, despite all the quarantining, lock-downs, stay-at-home orders and shut downs that have paralyzed the citizens of Minnesota.

So, now you know that Governor Tim Walz unilaterally based our lockdown policies on data developed by inexperienced grad students who volunteered for a weekend project, building a questionable model that was used to determine how long you get to be under house arrest.

Tyranny is alive and well in Minnesota.