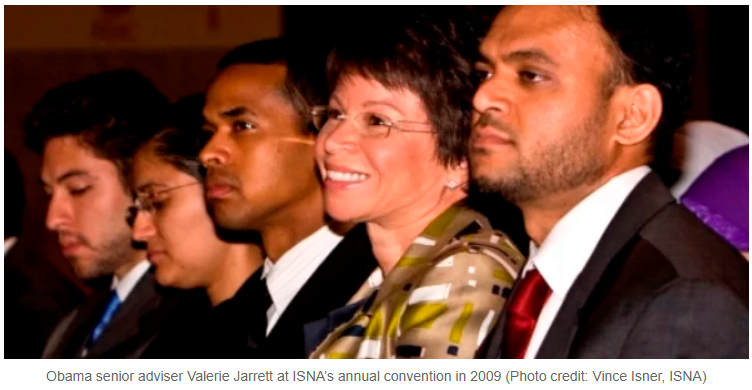 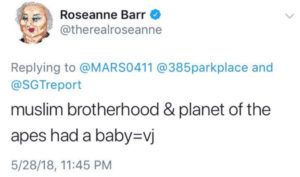 The “vj” in the tweet refers to Obama advisor, Valerie Jarrett.  The tweet caused an uproar: Twitter users, celebrities and others accused Roseanne of being racist and comparing Jarrett to an ape.  Although Roseanne repeatedly apologized, ABC canceled Roseanne – the highest rated show on the network.

While most focused on the “racism” of the tweet, few seemed to question the Muslim Brotherhood portion of the tweet.  Considering that there have been bills in Congress to designate the Muslim Brotherhood as a terrorist organization (it is designated as such in other countries and banned in Egypt, Saudi Arabia and the UAE), it would seem this would have struck people almost as strongly as The Planet of the Apes reference. However, many Americans only seem to know of Valerie Jarrett as one of Obama’s senior advisors, but have no idea who she is or anything of her background.

Valerie Jarrett and The Muslim Brotherhood

Judicial Watch reported in 2015 that “It’s been well documented that Valerie Jarrett, a Chicago lawyer and longtime Obama confidant, is a liberal extremist who wields tremendous power in the White House. Faithful to her roots, she still has connections to many Communist and extremist groups, including the Muslim Brotherhood. Jarrett and her family also had strong ties to Frank Marshall Davis, a big Obama mentor and Communist Party member with an extensive FBI file.”

It has long been reported that the Obama administration had ties with Islamic leaders.  A 2015 article by Breitbart reported that in February 2015, fourteen Muslim “leaders” met with Obama in the White House.  As Obama’s constant adviser, Valerie Jarrett was also in the meetings.  The people attending the meetings included Azhar Azeez, President of the Islamic Society of North America (ISNA). “ISNA was founded in 1981 by members of the Muslim Brotherhood” (Breitbart). Breitbart provided more information on Azeez:

Azeez’s bio also reveals him as a founding member the Council on American Islamic Relations (CAIR) Dallas/Fort Worth Chapter. CAIR has also allegedly funneled money to Palestinian terror groups and was also started by members of the Muslim Brotherhood.

In October, 2014, Azeez signed a letter endorsing Sharia Islamic governance. Under the Sharia, non-Muslims are treated as second-class citizens. The Sharia also endorses the hudud punishments in the Koran and Hadiths, which state that apostasy from Islam is punishable by death.

According to Breitbart, others who visited the White House in 2015 included:

Hoda Elshishtawy of the Muslim Public Affairs Council (MPAC) was also in attendance at the Muslim leaders’ meeting with President Obama.

MPAC, just like CAIR and ISNA, was founded by members of the Muslim Brotherhood.

Mohamed Majid, who serves as Imam of the All Dulles Area Muslim Society (ADAMS).

In 2002, ADAMS was raided as part of a U.S. government initiative called “Operation Green Quest,” where federal agents suspected the group of supporting terrorist organizations. Government documents said that the ADAMS Center was “suspected of providing support to terrorists, money laundering, and tax evasion.”

He also signed the October 2014 letter, along with White House meeting attendee Azhar Azeez, insisting that Sharia law should be an acceptable political system worldwide.

In 2009, Valerie Jarrett spoke at the Islamic Society of North America’s 46th Annual Convention.  According to the White House press report, “Jarrett spoke of the importance of President Obama’s Cairo speech, where he emphasized that the United States and Muslim communities share fundamental values, such as justice, progress, tolerance, and the dignity of human beings.”

Though there is evidence to conclude that Jarrett may be sympathetic toward the Muslim Brotherhood, the direct ties are less distinct.  However, there is ample evidence to show that Jarrett has communist ties.  In June 2015, Judicial Watch released a report outlining Jarrett’s connections to communism: “Federal Bureau of Investigation (FBI) files obtained by Judicial Watch reveal that the dad, maternal grandpa and father-in-law of President Obama’s trusted senior advisor, Valerie Jarrett, were hardcore Communists under investigation by the U.S. government.” According to the JW report, the FBI had a large file on Jarrett’s father, Dr. James Bowman.

In 1950 Bowman was in communication with a paid Soviet agent named Alfred Stern, who fled to Prague after getting charged with espionage. Bowman was also a member of a Communist-sympathizing group called the Association of Internes and Medical Students. After his discharge from the Army Medical Corps in 1955, Bowman moved to Iran to work, the FBI records show.

According to Bowman’s government file the Association of Internes and Medical Students is an organization that “has long been a faithful follower of the Communist Party line” and engages in un-American activities. Bowman was born in Washington D.C. and had deep ties to Chicago, where he often collaborated with fellow Communists. JW also obtained documents on Bowman from the U.S. Office of Personnel Management (OPM) showing that the FBI was brought into investigate him for his membership in a group that “follows the communist party line.” The Jarrett family Communist ties also include a business partnership between Jarrett’s maternal grandpa, Robert Rochon Taylor, and Stern, the Soviet agent associated with her dad.

Jarrett’s father-in-law, Vernon Jarrett, was also another big-time Chicago Communist, according to separate FBI files obtained by JW as part of a probe into the Jarrett family’s Communist ties. For a period of time Vernon Jarrett appeared on the FBI’s Security Index and was considered a potential Communist saboteur who was to be arrested in the event of a conflict with the Union of Soviet Socialist Republics (USSR). His FBI file reveals that he was assigned to write propaganda for a Communist Party front group in Chicago that would “disseminate the Communist Party line among…the middle class.”

The Planet of the Apes (“TPOTA”)

While many accused Roseanne of comparing Jarrett, an African American woman, to an ape with the Planet of the Apes reference in her tweet, others had a different opinion about Roseanne including TPOTA in her tweet:

I took her comment to be referring to the totalitarian state of TPOTA’s society but I might be wrong.

The trilogy gives vibrant new allegorical form to radical thought, providing valuable narratives, characters, and images that articulate possibilities for political resistance (emphasis added). Going directly against the grain of gritty world-building grounded in a politics of cynicism, Rise of the Planet of the Apes gives dramatic expression to the kind of “moment of possibility” that Berardi tries so hard to identify. This startlingly intelligent Hollywood blockbuster combines its uncompromising indictment of capitalism’s monstrous exploitation of animals with a flexible but thoroughly radical metaphor of political oppression.

Considering the influence Jarrett wielded during the eight years of the Obama presidency and the widening rift between Left and Right along with the rise of racial tensions, TPOTA reference does not necessarily reflect a racist remark.  Rather, it can be viewed as part of Jarrett’s idealogy: the idea that Americans must resist the Trump presidency.  The “Resistance” movement began before Trump was elected, and has been fueled by Jarrett’s cohorts and the Obama “Organizing for Action” (formerly “Organizing for America”) organization.

OFA activists helped organize anti-Trump marches across US cities, some of which turned into riots. After Trump issued a temporary ban on immigration from seven terror-prone Muslim nations, the demonstrators jammed airports, chanting: “No ban, no wall, sanctuary for all!”

Run by old Obama aides and campaign workers, federal tax records show “nonpartisan” OFA marshals 32,525 volunteers nationwide. Registered as a 501(c)(4), it doesn’t have to disclose its donors, but they’ve been generous. OFA has raised more than $40 million in contributions and grants since evolving from Obama’s campaign organization Obama for America in 2013.

OFA, in IRS filings, says it trains young activists to develop “organizing skills.” Armed with Obama’s 2012 campaign database, OFA plans to get out the vote for Democratic candidates it’s grooming to win back Congress and erect a wall of resistance to Trump at the other end of Pennsylvania Avenue. ~ Paul Sperry, New York Post, Feb. 11, 2017

Obama was her protector and benefactor while the federal government occasionally stepped in to shut them down.

In a February 2017 article for RealClearPolitics.com, Andrew Napolitano listed out the number of scandals within the Obama administration overlooked by then Senior Advisor Valerie Jarrett.

Operation Fast and Furious, which began in the George W. Bush administration, exploded under Obama, when the guns the feds intentionally had let slip into the hands of Mexican gangs were used to kill one of their own.

Then came Libya, where heavy armaments the feds secretly had passed into the hands of terrorists masquerading as rebels were used to kill the U.S. ambassador and topple a friendly government.

Then came the seizure of telephone records of journalists critical of the administration by the Department of Justice, which secretly convinced a federal judge that talking to a whistleblower and reporting on his questionable behavior somehow involved reporters criminally in that behavior.

Then came the targeting by the IRS of conservative advocacy groups by denying them tax-exempt status for political reasons.

Then came the Secret Service scandal in which dozens of agents were caught in sexual encounters on foreign trips in hotels where the president was staying — encounters that involved the loss of laptops and itineraries and jeopardized the president’s physical safety — and two directors lost their jobs.

Then came the Edward Snowden revelations that the government was capturing every keystroke of every person using every computer and mobile device in the United States yet was still failing to keep us safe and that a senior Obama official had lied about this under oath. And all this was done without the approval of Congress, using a secret court that rationalized its way around the Constitution.

While all this was happening, the president was secretly using drones to kill Americans and others in foreign lands — folks never charged with crimes — using laughable legal authority as justification. Also, then-Secretary of State Hillary Clinton was exposing state secrets — including the names and whereabouts of undercover American agents — to friend and foe alike, and the FBI declined to recommend prosecution. And while Clinton was under investigation, her husband, former President Bill Clinton, had a private meeting on an airport tarmac with the attorney general — whom he had once appointed a U.S. attorney — at which they claim they discussed their grandchildren.

All those scandals may pale in light of the current /SpyGate investigation, as well as the findings of the long-awaited OIG report set to be released on June 5, 2018. Fox News reported:

Justice Department’s Office of Inspector General (OIG) on its examination of the FBI’s highly questionable investigation of Hillary Clinton’s use of a private server to handle her State Department emails when she was secretary of state.

The new OIG report, expected to be released within days, could unleash serious consequences for senior-level Justice Department and FBI officials who served during the Obama presidency.

Given the tools available to the OIG and the credibility of Justice Department Inspector General Michael Horowitz, the latest report could also uncover new and seriously damaging information about Clinton’s email practices, including her handling of classified information.

Since Jarrett was one of – and reportedly still is – Obama’s most trusted advisors and confidants, one wonders how she may also be implicated in the upcoming OIG investigation.

3 thoughts on “Who is Valerie Jarrett?”