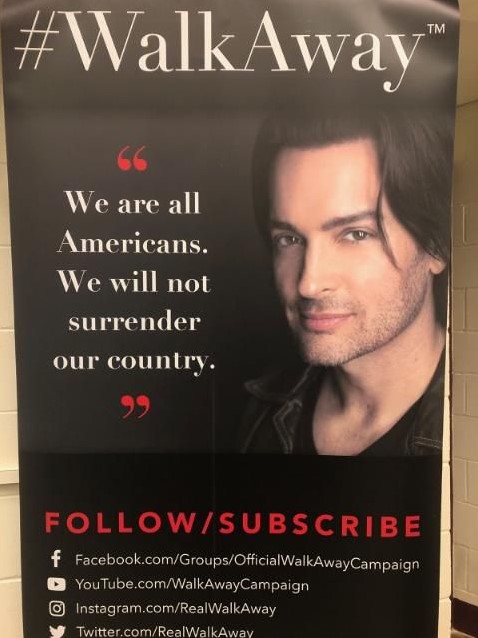 If you are still afraid of speaking out and showing up to support President Donald Trump, Brandon Straka has a message for you. Now is not the time for fear, it’s a time for courage. Brandon Straka, a former liberal, created #WalkAway in response to the Soviet-style tactics the Left uses to strangle our nation. The Democrat Party of today will stop at nothing and uses fake news, race baiting and victimization to push a false narrative.

The Minnesota Republic, a conservative student organization, hosted Brandon Straka, the creator of #WalkAway, on the University of Minnesota Campus; not the safest place for those espousing support for conservatism and President Donald Trump. We’ve all watched videos of Trump supporters receiving beat downs, being spat upon, cursed, and pushed to the ground. The hate driven Leftists stop at nothing to gain control of you, your job, what you eat, what you wear and what you think. Take a look at what happened to people after they attended a Trump rally in Minneapolis in October. The outrageous and loathsome behavior of the Left exhibited in this video should be enough to get you off the couch!

Brandon’s story is unique. Raised by conservative parents in Nebraska, Brandon said he knew he was gay at the age of 5. When he moved to New York City and established a lucrative business at a salon, he found acceptance with people on the Left. That acceptance ended when Brandon “came out” as a conservative. He explained to the small crowd at the U of M that he was a Hillary supporter and cried when Trump was elected. It was a miracle this man walked away from the left and began a movement that has captured the attention of President Trump. This walking miracle is taking his message to college campuses across the country in his “Thought Revolution College Campus Tour.”

Let’s face it, the reason the Left has been able to control our lives is because we let it happen by ignoring what they were doing. Going along to get along has led to a failing public school system, our money being stolen to sustain fraudulent government programs, and the theft of our once superior health care system. Our future and our Nation are at stake.

Brandon is the perfect example of the power of truth and the willingness to bring the truth to those who need it the most. His message is one of unity rather than division. #WalkAway is for everyone who wants to save our nation from the Left;  libertarians, Never Trumpers, Democrats, and LGBT.  It’s time for all of us to be silent no more!

For those of you on the Left, #WalkAway from hate and violence. For those of us on the right, #WalkWith those who take the courageous first step toward unity and patriotism.