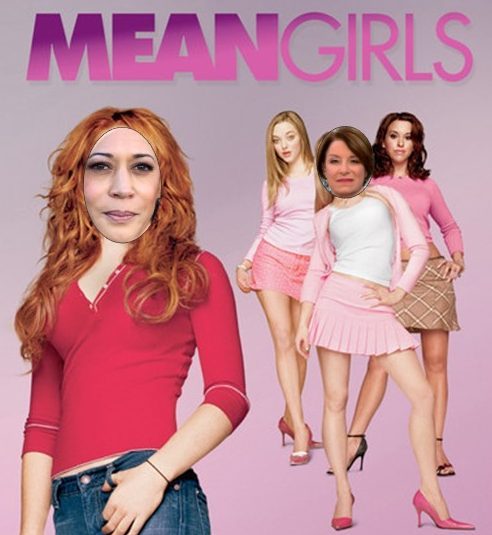 It’s just like the movie Mean Girls, but without the “Burn Book”.

An aide to Kamala Harris recently resigned from the Democratic California senator’s presidential campaign, writing that she has “never seen an organization treat its staff so poorly.”

Kelly Mehlenbacher, a state operations director with the Harris campaign wrote in her November 11th resignation letter that was obtained by the New York Times, “…the treatment of the staff over the last two weeks was the final straw in this very difficult decision.”

Mehlenbacher said the Harris campaign encouraged people to move to the Washington, D.C./Baltimore area and then laid them off without notice and without thoughtful consideration of their personal consequences or the consequences of their absence on the staff who remained with the campaign.

She added that the campaign is plagued by indecision and a “lack of leaders who will lead”.

And it couldn’t have happened to a nicer person than Kamala Harris. Harris is a Mean Girl.

It is Harris who spewed venom and caustic questions at Justice Brett Kavanaugh during the hearings for his appointment to the United States Supreme Court as he fought against weak accusations that he sexually assaulted Christine Blasey Ford more than 30 years before. In a tweet in September, Harris said that Kavanaugh “lied to the U.S. Senate” and was “put on the Court through a sham process” and that his place on the Supreme Court is an “insult to the pursuit of truth and justice.”

I sat through those hearings. Brett Kavanaugh lied to the U.S. Senate and most importantly to the American people. He was put on the Court through a sham process and his place on the Court is an insult to the pursuit of truth and justice.

He must be impeached.

Of course, anyone with a modicum of common sense and a brain noticed Blasey Ford couldn’t remember any details of the alleged assault like where it took place, who was there and how she got home. The only clear thing she “remembered” from the event that occurred more than 30 years ago was that the person who assaulted her was Kavanaugh. Kavanaugh fiercely fought against the accusations and eventually was appointed to the Supreme Court.

Getting back to Harris, she is a partisan hack and her meanness is catching up to her. The New York Times recently said about Harris, “She has proved to be an uneven campaigner who changes her message and tactics to little effect and has a staff torn into factions.” If she has a staff torn into factions, imagine what she will do for the United States as our Commander in Chief!

Harris isn’t the only Mean Girl in search of the Oval Office.

Remember Amy Klobuchar’s staffer who claimed that she mistreats her staff? In one particular incident that went viral, Klobuchar had berated an aide for forgetting to bring utensils after buying the Minnesota Senator a salad at an airport. The story goes that the airline which Klobuchar was traveling did not have any utensils on board, so the resourceful senator ate her salad with her own comb. Ick! After she finished eating her salad, she ordered the staffer to clean off the comb.

Employees spoke on the condition of anonymity about the toxic environment at Klobuchar’s offices, which included demeaning emails, throwing office supplies and requesting staff to perform degrading personal chores for the senator. In fact, she is so mean to the people who work for her that even former senate majority leader Harry Reid (D-NV) had to rebuke Klobuchar for the mistreatment of her staff. You know Klobuchar’s behavior had to be bad when someone as nasty as Reid had to give her a talking to.

Democrats claim to be the party of tolerance and acceptance. Both Harris and Klobuchar don’t sound very tolerant and accepting of their employees. Perhaps these candidates should read Luke 6:31: “Do unto others as you would have them do to you.”

No one wants a Mean Girl for president.