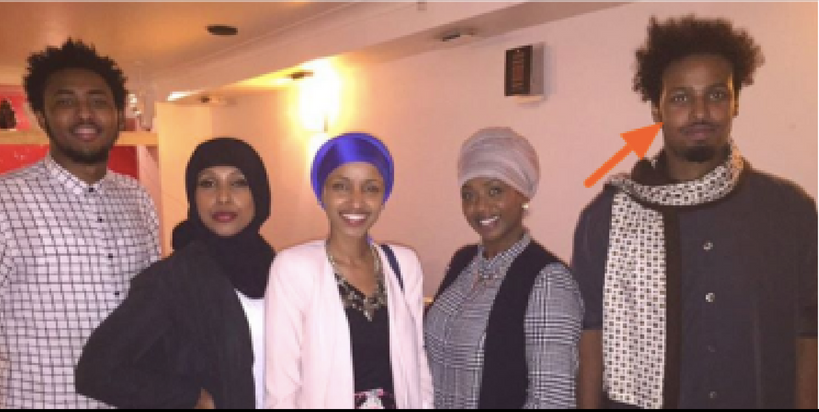 Ilhan Omar is the Minnesota Democratic State Representative who allegedly married her brother and is now running for U.S. Congress, hoping to replace Keith Ellison in Minnesota’s 5th Congressional District. Ellison is facing his own battles in his race for Minnesota Attorney General with accusations from his ex-girlfriend that he physically and emotionally abused her, which he denies.

In researching his latest article about Omar, Steinberg, assisted by a legal researcher, extensively searched publicly available address records. Steinberg discovered that in August 2009, both Ilhan Omar and her “legal husband” Ahmed Nur Said Elmi left Minnesota to move to North Dakota to attend North Dakota State University (NDSU).  Address records which Steinberg uncovered show that both Omar and Elmi lived at 2608 Pacific Drive South, Fargo, North Dakota 58103.  Steinberg also discovered that Omar’s first husband, Ahmed Hirsi (the man she claimed to be “culturally” married to and separated from so she could marry Elmi) was also living at the same Pacific Drive South address in August 2009.

So Steinberg’s research proves Omar, her former husband and her new husband/alleged brother all lived together in North Dakota at not one, but two addresses. Talk about Three’s Company!

Deplorable Housewives of the Midwest also did some digging of our own and discovered that Omar, Elmi and Hirsi all lived at the same address in Columbia Heights, Minnesota too.

Ahmed Hirsi was the owner of a business called “One on One Café Lounge”.  A Minnesota Secretary of State business filing dated May 21, 2009 listed Ahmed Hirsi as the nameholder of “One on One Café” and listed his address as: 859 41st Avenue NE, Columbia Heights, MN 55421.  This address is the SAME ADDRESS listed on the marriage license application of Ilhan Omar and Ahmed Nur Said Elmi which is dated just a few months earlier on February 12, 2009: 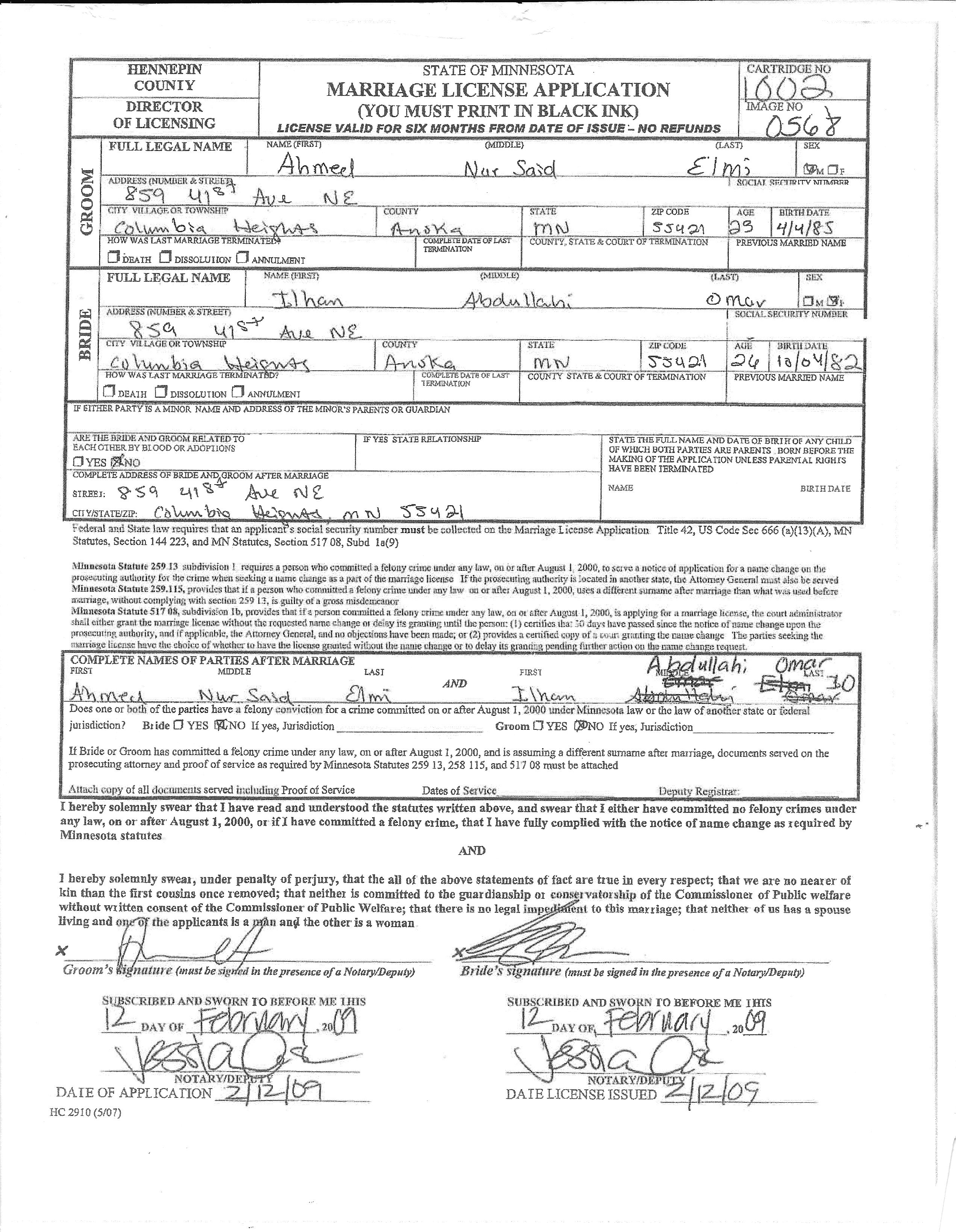 As you can clearly see from the above documents, Omar, Elmi and Hirsi all claimed to live at 859 41st Avenue NE, Columbia Heights, MN 55421. What are the odds? How many divorced or separated couples do you know live with both their former spouse AND their new spouse? And in two different states as well!!!

Does anyone else here smell something really bad?

Omar claims that she and Hirsi separated, and she went on to marry Elmi on February 12, 2009. On the marriage license application that both Omar and Elmi signed, the bottom of the document states: “I hearby solemnly swear, under penalty of perjury, that the all of the above statements of fact are true in every respect; that we are no nearer of kin than the first cousins once removed; that neither is committed to the guardianship or conservatorship of the Commissioner of Public Welfare without written consent of the Commissioner of Public Welfare; that there is no legal impediment to this marriage; that neither of us has a spouse living and one of the applicants is a man and the other is a woman.”  If Omar and Elmi are indeed siblings, then both committed perjury under penalty of law in their marriage license application. Steinberg’s article in August 2018 states Omar also committed perjury by swearing to apparent falsehoods in court during her divorce from Elmi. Steinberg said in his October 30th article a Department of Justice investigation into Omar’s past appears inevitable and evidence suggests that immigration fraud and student loan fraud were the motivations for Omar’s marriage to Elmi.

Even Democrats say that Omar committed marriage fraud. Omar’s predecessor in the Minnesota House, former State Representative Phyllis Kahn told The Intercept in an August 2018 interview that Omar was “anti-Semitic,” and that “the story about the two husbands is completely true.”

Steinberg reached out via e-mail to Omar as well as other key people in the Minnesota Democratic Party before publishing his articles in PJ Media and he said he never received a response. In his e-mail, Steinberg tells Omar that he has contacted the US Attorney office in Minnesota with an offer to share all other evidence he has compiled while investigating this story.

Pop the popcorn.  This is getting good… 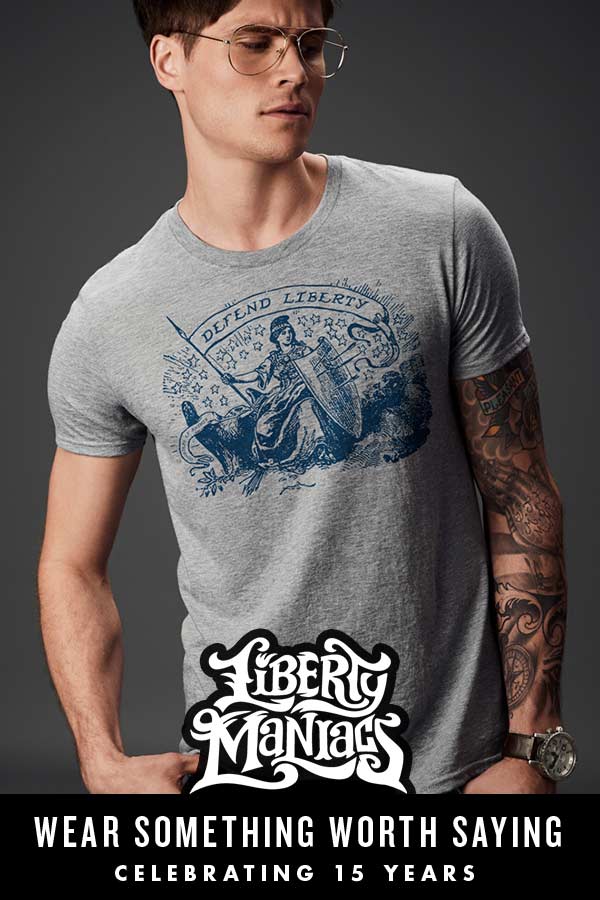