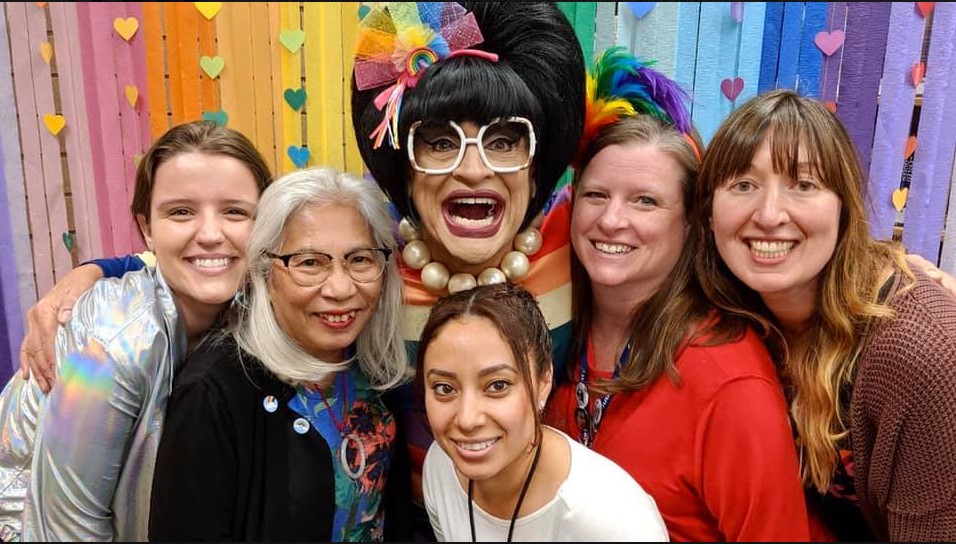 Peggy Tierney, a slight woman in her 60’s who is hearing impaired, was stunned by her treatment when she attended the Drag Queen Story Hour event at the Richfield Public Library on Saturday morning. “I went to the Drag Queen Story Hour event by myself to observe,” said Tierney. “This is my neighborhood. I grew up here. When I arrived, I thought I might as well get a new library card. After that, things went downhill fast.” The Youth Services Librarian used Tierney’s personal information on her library card to doxx her to activists attending the event.

Youth Services Librarian, Alison Reiter (the woman pictured with bangs introducing the Drag Queen seen in the photo below) approached Peggy after she had applied for a new library card. “Everyone knows who you are. You are Peggy Tierney.” Tierney, not easily cowed, asked Reiter if she was a public library employee or an activist to which Reiter replied, “Both!”

Things went from bad to worse for Tierney, who was quickly surrounded and monitored by several members of the Richfield Social Justice Community (RSJC.) According to Tierney, “Three large women from the RSJC served as bouncers for the event. The public library used my private library card information to “doxx” me to these activists.”

Each time Tierney attempted to photograph the event, she was surrounded by the RSJC activists. “I was told by another library staffer that only people with children were allowed to take pictures or video the event  and I was physically prevented from doing so,” said Tierney. “Meanwhile, a reporter from the Star Tribune and many others were allowed to photograph at will.”

Tierney asked Candace Johnson, of the RSJC, why the Drag Queen only read books promoting transgenderism and the LGBT flag. Candace responded in anger to her innocent questions. “If you are anti-LGBT or anti-drag queen, you should leave the public library immediately,” said Candace.

“I told Candace that I was not anti-LGB. I have family and friends who are gay. I was there to observe and had every right to be at a public library in my community,” said Tierney.

According to Tierney, Candace Johnson and Allysen Hoberg of the RSJC are anti-police, anti-ICE and are helping to organize a Dump Trump, Trump Not Welcome in Minneapolis on the day of the President Donald Trump’s visit to Minnesota on October 10. Take a look at the Facebook conversation between RSJC activist, Allysen Hoberg and Sally Polkinghorne Cassellius. Cassellius is a relative of Mark Dayton’s Commissioner of Education, Brenda Cassellius. It’s obvious from this post, which has since been removed, that the Youth Services Librarian doxxed Tierney and gave her name and private information to RSJC member Allysen Hoberg. 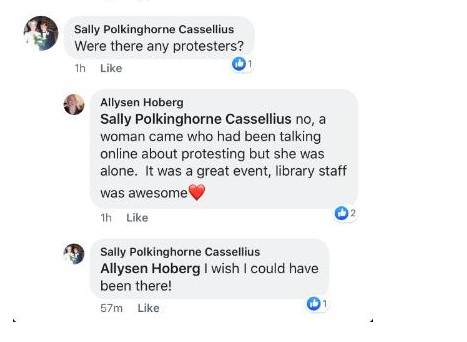 Libraries in Minnesota are considered a “safe space.” According to the 2017 publication, The Library as Safe Space, “library administrators must reconsider whether their libraries provide equal, emphatic, nonjudgmental service to everyone, have resources for everyone…”

Everyone, except tax paying citizens, who just happen to be Trump supporters, are welcome in Minnesota libraries.