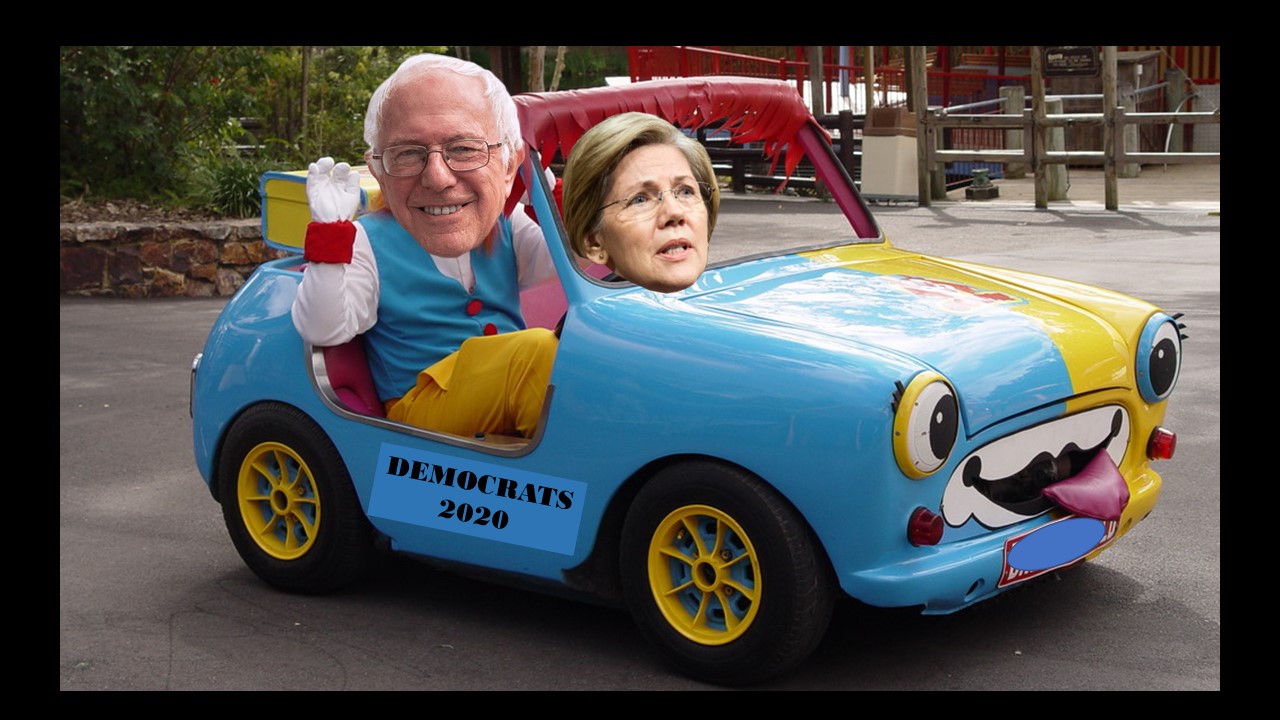 The entrance of dusty, old and decrepit Socialist Vermont Senator Bernie Sanders into 2020 Presidential race is just the latest in a never-ending clown car of democratic candidates. Anyone with a modicum of common sense is probably scratching their heads wondering what ever happened to presidential hopefuls with a sense of decency, integrity, morals and love of country.

Sanders, who was cheated out of becoming the Democratic Presidential nominee in 2016 by “Ol’ Noodlehead” Debbie Wasserman Schultz when she rigged the DNC primary in favor of Hillary “Hammer” Clinton, emerged from the mothballs, hoping to turn America into Venezuela. During his taped announcement, Sanders appeared to finally have combed his wily white hair and gleefully said that he was going to transform America. Now, where have we heard that before?

“Our campaign,” Sanders said, “is about transforming our country and creating a government based on the principles of economic, social, racial and environmental justice.”

The Democrat 2020 Presidential candidate line-up is a race to the bottom.

Other well known clowns who have announced their candidacy for the nation’s highest office are California Senator Kamala Harris and New Jersey Senator Cory Booker. These two were an obnoxious disgrace during the Justice Brett Kavanaugh Supreme Court confirmation hearing. Harris bullied Kavanaugh relentlessly, even going so far as to release a heavily edited video of the then-Supreme Court nominee in an attempt to smear him. Harris deceitfully posted on her Twitter account an edited video of Kavanaugh answering a question that Texas Senator Ted Cruz asked him regarding his dissent in the case Priests for Life vs. Health and Human Services. In her tweet under the doctored video, Harris wrote that Kavanaugh was “going after birth control” and his nomination was about “punishing women”.  In Democrat World, anyone who is not in favor of killing a baby is punishing women.

Harris began her illustrious career as the “other woman” in the marriage of Willie Brown who was formerly the Mayor of San Francisco and the former speaker of the California State Assembly. In an article Brown recently wrote for the San Francisco Chronicle entitled “Sure I Dated Kamala Harris. So What?” Brown takes credit for influencing Harris’ career by appointing her to two state commissions when he was Assembly Speaker. So, if Harris does become the first female president of the United States, it’s a comfort to know that she slept her way to the top rather than earn her positions through hard work, skill, knowledge, ethics and integrity.

Onto the other clown known as Senator Booker. He famously broke Senate rules during the Kavanaugh hearings by publicizing a confidential e-mail that Kavanaugh received during the George W. Bush administration in an attempt to make the Supreme Court nominee appear racist. No punishment was given to Booker for breaking the rules, because, you know, he’s a democrat and they’re allowed to break any laws and rules that they want.

It was also during the Kavanaugh hearings that a controversial story about Booker seemed to pop up and quickly dissipate. The story involved a young man who claimed to have been sexually assaulted in 2014 by Booker. The young man wrote a lengthy post about the tawdry incident on social media. Nothing more has been said about it. The media did not go crazy and just like magic, the story disappeared. Another damning piece of news surfaced regarding an article Booker wrote in 1992 about him groping a female high school friend’s breast. Assaulting women is okay if you’re a Democrat. Nothing to see here. Move along.

My best friend in New York asked me, “Who was that idiot from Minnesota announcing her candidacy in the middle of a raging snowstorm?” Senator Amy Klobuchar, who no one has heard of outside of her home state of Minnesota, is the Joan Crawford of Presidential Candidates.

Staffers who refuse to give their names say Klobuchar has a penchant for treating her employees like garbage. According to the left-wing Huffington Post, “former staffers told the website that the senator was ‘habitually demeaning and prone to bursts of cruelty,’ often calling the staffers and their work ‘the worst.’ E-mails berating staffers would reportedly have large groups of other workers cc’ed on them, reportedly adding to the humiliation. Three former staffers also claimed Klobuchar made her staffers schedule her “personal appointments, [wash] dishes at her home or [pick] up her dry cleaning.”  Legistorm, a congressional staff database says Klobuchar has one of the highest staff turnover rates in Congress. You gotta be a really bad candidate for the HuffPost lambaste you.

Klobuchar is not really a defender of women’s rights either. She never spoke out against former Minnesota Senator Al Franken after he was caught “red handed” in a photo cupping the breasts of a sleeping female soldier and she remained quiet during Minnesota Attorney General Keith Ellison’s sexual assault allegations by his former girlfriend, Karen Monahan. After all, they are fellow democrats.

Let’s not leave out 2020 candidate Massachusetts Senator Elizabeth “Liawatha” Warren who rode the fabricated story of her Native American heritage all the way to Harvard. It was only when Warren took a DNA test she found that there was a less than 1% chance that she is of Native American descent. But that didn’t stop her from lying on her Texas Bar license or lying to Harvard to get a prestigious teaching job at the University. Integrity is obviously not one of her strong points but, hey, she’s running for President any way. I guess we should be relieved that she isn’t going to be pulling the race card this time, right?

Democrats are also waiting with baited breath for the announcement by former Vice President, Gropey Joe Biden. Biden is the king of gaffes and has a habit of uncomfortably touching young girls. Tone deaf to his own racism, Biden once famously commented about then-presidential candidate Barack Obama, “I mean, you got the first mainstream African-American who is articulate and bright and clean and a nice-looking guy. I mean, that’s a storybook, man.”  Wow.

We can’t wait to see what other quality candidates the Democrats will drag onto the National stage. There is buzz that faux-Mexican/real-Irishman Robert “Beto” O’Rourke of Texas might throw his hat in the ring. Beto has clown written all over him. Besides looking like Napoleon Dynamite’s long lost brother, he’s as unqualified and undignified as it gets. In 1995, O’Rourke was arrested for burglary and in 1998, he had a DUI. He had Eminent Domain ethics violation complaint in 2006 and in 2013, he admitted to an illegal Twitter stock purchase. In 2018, the FEC charged his campaign with illegal campaign contributions. RedState reported in 2018: “O’Rourke’s political career kicked off with so much shadiness and obvious corruption that it’s a wonder of the world that this hasn’t been brought up by any of the news outlets.” He sounds like a charm.

Another passenger in the clown car is ex-San Antonio Mayor and Barack Obama’s Secretary of Housing and Urban Development Julian Castro. In 2014, A Housing and Urban Development (HUD) Inspector General report claimed that when he was mayor of San Antonio, Castro may have misused $1.1 million in federal neighborhood stabilization funds when renovations of some of the properties were not put toward low-income housing as required by HUD regulations. Oops! Laughably (and pathetically) under Castro’s watch, his city misspent funds from the very agency he was appointed to lead.

Hawaii Rep. Tulsi Gabbard, who is barely hanging onto the back of the clown car had to walk back comments she made earlier in her career that were against Gay Marriage. Rule #1 in Democrat World – Thou shalt not say anything negative about any protected class of people. Will she be forgiven by the LGBTQ crowd? Probably. She has a “D” after her name.

We can’t wait to see who emerges next from the Democratic clown car of 2020 Presidential candidates.